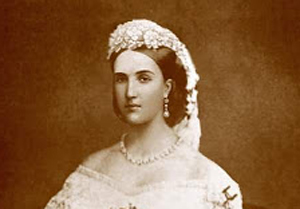 Joséphine-Charlotte, Grand Duchess of Luxembourg (born Joséphine-Charlotte Ingeborg Elisabeth Marie-José Marguerite Astrid, Princess of Belgium, October 11, 1927 – January 10, 2005), was born at the Royal Palace of Brussels as the oldest child and only daughter of King Leopold III and Queen Astrid.

The young princess spent her childhood at the Stuyvenberg Palace just outside of Brussels with her parents, Prince Léopold and Princess Astrid. Her mother, who was born a Princess of Sweden and a direct descendant of Joséphine de Beauharnais, was killed in an automobile accident in 1935 at age 29. Her father was a direct descendant of Stéphanie de Beauharnais, cousin of Joséphine's first husband and adopted daughter of Joséphine's second husband.

Princess Joséphine-Charlotte first attended school at the Royal Palace where a small class had been organized for her. At the end of 1940 she entered a boarding school and then continued her education with her own private teachers. On June 7, 1944, the day after the Allied Forces landed in Normandy, France, she and her father were sent to Germany and kept there under house arrest. The Royal Family, which included her brothers Baudouin and Albert and their stepmother, Mary Lilian Baels, Princess de Réthy, was freed on May 7, 1945 and settled in Prégny, Switzerland.

Princess Joséphine-Charlotte continued her studies at the "Ecole Supérieure de Jeunes Filles" in Geneva, Switzerland. Afterwards she took Jean Piaget's lectures on child psychology at the University of Geneva. When she returned to Belgium the princess took up her official duties. At the same time she also devoted herself to social problems and developed her interest in the arts.

On April 9, 1953, the princess married Prince Jean of Luxembourg, heir to the grand ducal throne of Luxembourg. They had five children:

The Grand Duchess was interested in childhood problems, family and health problems. From 1959 to 1970 she was President of the Luxembourgish Youth Red Cross; from 1964 until her death.

Joséphine-Charlotte, who had suffered from lung cancer for some time, died at Fischbach Castle at the age of 77, survived by her husband, children and grandchildren.