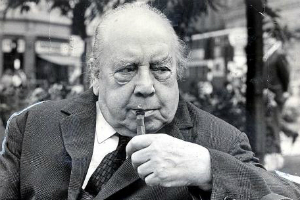 British essayist, novelist and playwright. Educated at Cambridge, he became a popular broadcaster during WW II, also serving as a delegate to UNESCO 1946-1947. Priestley’s literary output was vast and varied. He wrote over one hundred novels, plays and essays, and is best known for his 1929 novel "The Good Companions." Versatile, he was a patriot, a cosmopolitan, a professional amateur, a cultured Philistine, a reactionary radical and a down-to-earth spokesman for the common man. He refused knighthood and peerage, but accepted the prestigious Order of Merit in 1977. Priestley died in 1984.

John Boynton Priestley was born in Bradford, West Yorkshire, in the north of England. His father, Jonathan Priestley, was a prosperous schoolmaster and his mother died during his infancy. John attended Bradford Grammar School, but left at 16 to work as a junior clerk at a local wool merchant from 1910 to 1914. He had begun to write poetry for pleasure at Bradford and contributed articles to local and London papers.

In 1914 he enlisted in the army, serving overseas. Later, he often drew on his wartime experiences and memories of pre-war England in his writing. When he was demobilized in 1919 he studied for three years at Cambridge, taking courses in literature, history and political science. He received his Bachelor of Arts degree in 1921. Beginning in 1922, he worked as a journalist in London, starting as an essayist and critic for various publications. His first collection of essays, "Brief Diversions," was published in 1922.

His novel about the adventures of a troop of traveling players, "The Good Companions," 1929, gained international popularity. In the 1930s Priestley started as a playwright with popular comedies "Dangerous Corner," 1932, "Laburnum Grove," 1933 and "Time and Conways," 1937. He founded his own production company, and was director of the Mask Theatre in London from 1938 to 1939. He wrote about 50 plays.

Notable among Priestley’s other books were "English Journey," 1934, a seminal work in arousing social conscience, "Literature and Western Man." 1960, a survey of Western literature, and his memoirs, "Margin Released," 1962. His novel "The Magicians," 1954, reflected the influence of psychologist Carl Jung. "Found, Lost, Found," 1976, his last novel, was an old-fashioned fairy tale in a modern setting.

After World War II broke out, Priestley was recognized as the ‘voice of the common people’ for his patriotic radio broadcasts. During the Cold War, he supported the Campaign for Nuclear Disarmament. From 1946-1947 he was a U.K. delegate to UNESCO.

Priestley’s body of work includes over 120 books, usually light and optimistic in tone. He continued writing for nearly 60 years. From age 70 to 84 he published 21 books. His essays were written for the "middle brow" audience with numerous topics and themes.

Priestley married three times. His first marriage, to Emily Tempest ended with her early death in 1925. His second was with Mary "Jane" Wyndham Lewis, the former wife of biographer and satirist D. B. Wyndham. In 1953 he married archeologist and writer Jacquetta Hawkes. They lived in Warwickshire, near Stratford-upon-Avon. With her, Priestley wrote the travel book, "Down a Rainbow," 1955, which was based on a trip to New Mexico.