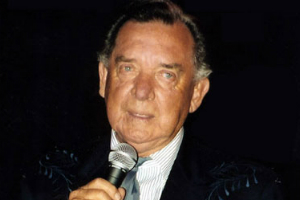 American country-western singer; still actively touring the country with his "Cherokee Cowboys," appearing on TV, and in fine voice at 71. He won nearly every major award in his field and was inducted into Country Music Association's Hall of Fame in October 1996.

Ray Price grew up in Dallas where he learned to play guitar and sing. After high school graduation, he began studies in veterinary medicine but left school to join the Marines in 1942. He returned to Texas in 1946 and performed at local clubs, as well as on the local radio station, where he was dubbed the "Cherokee Cowboy." Three years later, he joined the Dallas-based "The Big D Jamboree," and made music his full-time career.

In 1951, Price moved to Nashville and eventually signed with Columbia Records. In the spring of 1952, he met his idol, Hank Williams, who immediately became a good friend. Upon Williams' death in 1953 Price inherited his band. In 1954 Price returned to the charts with a number two hit and formed his own group, the "Cherokee Cowboys." Price’s 1956 hits included "Crazy Arms" which immediately became a country classic.

He remained at or near the top of the charts for the next ten years. By the mid-‘60s, Price's career momentum slowed and his musical tastes shifted to the crooning styles of pop singers. He earned another round of Top Ten hits, then spent most of the ‘70s struggling to get into the charts and switching recording labels.

In the early ‘80s, Price had a major duet success with Willie Nelson and two Top Ten singles. By the late '80s, Price turned his efforts to his theater in Branson, Missouri. For most of the '90s, he sang and performed at his theater, recording occasionally.

Billboard Magazine named Price Top Male Vocalist of the Year eight times. He won a Grammy for Best Male Country Vocal Performance in 1970 and almost every other major award in his field.

On 6 November 2012, Price confirmed that he has pancreatic cancer.