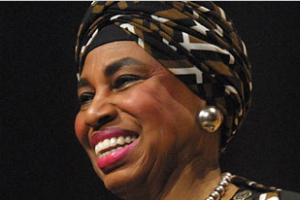 American opera singer whose ethereal voice is a soprano like none other. She achieved worldwide superstardom status in opera.

Price's dad, James, was a carpenter and her mom, Kate, a midwife. She spent her youth growing up in small towns and living mostly in the South. A college graduate with three years at Juilliard, her first recital was in New York in 1952. Her first major role on Broadway came in 1953 playing Bess in "Porgy and Bess." From there, she went on a worldwide tour. Her debut at the Metropolitan Opera in New York came on 1/27/1961 as Leonora in "Il Trovatore."

Price was the seventh black singer to make a Met debut - Marian Anderson was the first, in 1955 - but Price became the first black American to achieve worldwide superstar status in opera. Her performance of "Trovatore" received a rare 45 minute ovation in 1961. Price was the youngest singer to ever receive the Presidential Medal of Freedom in 1964 and she received the Spingarn Medal in 1965.

Over a span of 14 years, 1965 to 1979, Price recorded a total of 48 arias by virtually all major opera composers from Purcell and Handel to Britten and Barber.

Her first TV series began in 1955 with "Tosca." On her series of five "Prima Donna" albums she uses an amazing variety of styles as she assumes the depth of the 43 roles even though she never performed them in full. Having held center stage of the Metropolitan Opera for almost a quarter of a century, Price made her farewell in the title role of Verdi's "Aida," in January 1985 to devote time for herself.

Price is divorced and never had kids.