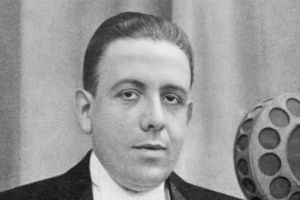 Poulenc was born in Paris in 1899. His father Émile Poulenc was a second generation director of the Poulenc, and later Rhône-Poulenc, chemical corporation. His mother, an amateur pianist, taught him to play. He was introduced to the Spanish pianist Ricardo Viñes in 1914, a champion of the music of Claude Debussy and Maurice Ravel, and became his pupil shortly afterwards.He was a capable pianist and the keyboard dominated his early compositions.

In 1916 a childhood friend, Raymonde Linossier (1897–1930), introduced Poulenc to Adrienne Monnier's bookshop, the Maison des Amis des Livres There he met avant-garde poets such as Guillaume Apollinaire, Max Jacob, Paul Éluard and Louis Aragon He later set many of their poems to music.

His first surviving composition, Rapsodie Nègre (1917), caught the attention of the Russian composer Igor Stravinsky. Stravinsky was later instrumental in having the work published in London.

Le bestiaire, ou Le cortège d'Orphée (also in 1917) is a cycle of mélodies on poems by Guillaume Apollinaire. In 1918 Poulenc performed the premiere of his Sonata for piano four hands with a fellow Viñes pupil, Marcelle Meyer.

Poulenc gave first performances of several of his new pieces: the Sonata for Two Clarinets, the Sonata for Piano Four Hands, a Sonata for Violin and Piano, and Trois mouvements perpétuels, at a series of concerts held from 1917 to 1920 in the studio of the painter Émile Lejeune in Montparnasse.[8] There Poulenc met other young composers, and together they formed Erik Satie's Les nouveaux jeunes, followed by Jean Cocteau's Les Six, a loose-knit group of young French and French-Swiss composers. Poulenc composed his Valse en ut for L'Album des Six (1920). He contributed to Les mariés de la tour Eiffel (1921) with Discours du Général and La Baigneuse de Trouville.

During the 1920s, Poulenc's most immediate influences were Chabrier, Debussy, Satie, and Stravinsky. He generally followed the irreverent, flippant aesthetic stance of Les Six with melodies influenced by Parisian music halls.

Between 1921 and 1925, Poulenc received his first formal musical training when he studied composition with Charles Koechlin (1921–25) He remained a mostly self-taught composer.

Sergei Diaghilev commissioned ballet music from Poulenc for Les biches. This was performed by the Ballets Russes in January 1924, with settings by Marie Laurencin.

In 1926 Poulenc met the baritone Pierre Bernac, who became a very close friend. A great many of the chansons and melodies Poulenc wrote were composed for Bernac. They gave recitals throughout the world together from 1935 until 1959. In 1927, Poulenc bought Le grand coteau, a house close to Noizay in the Touraine, where he enjoyed the quiet atmosphere he needed to work.

In 1928 he composed the Concert champêtre, a piece for harpsichord and orchestra commissioned by Wanda Landowska. It was dedicated to Poulenc's lover, the painter Richard Chanlaire. Also in 1928, Poulenc recorded his Trois mouvements perpétuels and the Trio for piano, oboe and bassoon, and then Le bestiaire. He also started publishing musical reviews in Les arts phoniques.

He created his Concerto for two pianos and orchestra with Jacques Février in 1932. Also in 1932 Le Bal Masqué, a lighter piece, was created privately at the Noailles.

The death of several friends and the composer, Pierre-Octave Ferroud, followed by a pilgrimage to Rocamadour in 1935, led to a religious reawakening in 1936. Poulenc continued to compose light music, such as the Quatre chansons pour enfants (1934) on texts by Jean Nohain(fr) (1934). Some of his works were more sombre and austere.

This is exemplified by his first sacred pieces, Litanies à la vierge noire ("Litanies to the Black Madonna") (1936) and the Mass in G (1937). The trend toward "new dimensions and greater depth" in the composer's style was continued by the song cycle Tel jour, telle nuit (1937) and Concerto in G minor for organ, strings, and timpani (1938).

During World War II, Poulenc, Durey and Auric joined the "Comité de Front National des Musiciens" created at the instigation of the French Communist Party in May 1941, led by Elsa Barraine and Roger Désormière.

One of his most popular songs is "Les chemins de l'amour". It was originally written as part of the incidental music for Jean Anouilh's play Léocadia (1940), but it achieved fame outside that context. The remainder of the Léocadia music is lost.

In his humorous ballet, Les animaux modèles (1942, with Serge Lifar), Poulenc used the theme of a French patriotic song without the German officers noticing. In 1943, he set to music Deux poèmes de Louis Aragon, although the poet was a communist and a member of the French Resistance. This piece was given at the salle Gaveau in December 1943. The cantata Figure humaine(fr) was finished in 1943, but it was not publicly performed until 1945, in London. It set to music poems by Paul Éluard, notably Liberté, thousands of copies of which had been dropped over French territory by the Royal Air Force in 1942. Poulenc dedicated this cantata to his companion, Raymond Destouches (a driver who died in 1988). It is also in 1945 that Poulenc composed L’histoire de Babar, le petit éléphant (The Story of Babar, based on a children's book).

Although the score of his only opera bouffe, Les mamelles de Tirésias ("Tiresias' Breasts", after Guillaume Apollinaire's surrealist drama) was completed in 1945, it was not performed until 1947, after Poulenc met soprano Denise Duval. She also sang the roles of Blanche in Dialogues of the Carmelites (1956) and Elle in La voix humaine (1958). The song cycle La courte paille was written for her (and her child) in 1960, and La dame de Monte Carlo in 1961.

Between 1947 and 1949, he became a radio host for À bâtons rompus. His choice of music was very diverse, including many pieces from the French repertoire.

He gave the first of his many concerts in the United States in 1948 with Bernac. During his time in the US, he met the American soprano Leontyne Price, who sang his chansons, and the composer Samuel Barber. His Mélodies passagères were performed in Paris in February 1952 by their dedicatees, Bernac and Poulenc.

In 1953, Poulenc started working on what was to become the opera Dialogues of the Carmelites based on a story by Georges Bernanos. Poulenc soon became obsessed with this work. He likened the sad fate of Blanche de la Force to the long agony of his boyfriend Lucien Roubert, a travelling salesman (1909–55) who died on the same day as Poulenc finished the piano version of the Dialogues. Poulenc adapted Bernanos' text for the libretto. The opera was first performed at La Scala in Italian, in January 1957 with Virginia Zeani singing the principal soprano role of Blanche. In June 1957, it was produced at the Paris Opera with Denise Duval as Blanche and Regine Crespin as Madame Lidoine. In September of that year, it was produced in the USA with Leontyne Price as Mme Lidoine; this was her first stage opera.

He followed the opera with La voix humaine (1958), a lyric tragedy based on Jean Cocteau's play. It was dedicated to Poulenc's last lover, Louis Gautier (a manual worker he met in 1957); they stayed together until Poulenc died.

Poulenc travelled to the US in 1960–61 for the American premieres of Les mamelles de Tirésias and La voix humaine. His Gloria for soprano solo, choir and orchestra was premiered in both Boston, conducted by Charles Munch, and in Paris, conducted by Georges Prêtre.

Poulenc published a book on Emmanuel Chabrier in 1961. He composed Sept répons des ténèbres in 1962. His last two works were premiered posthumously, in April and June 1963: the Sonata for Oboe and Piano was given by Pierre Pierlot and Jacques Février and the Sonata for Clarinet and Piano by Benny Goodman and Leonard Bernstein. Poulenc was particularly fond of woodwind instruments: having planned a set of sonatas for all of them, he lived to complete only four, for flute, oboe, clarinet, and the Elégie for French horn.

Poulenc had only one piano student, Gabriel Tacchino; he has performed and recorded all his piano music] Poulenc was the pianist in many of his recordings, including some of his own songs (with Pierre Bernac, recorded in 1947, and Rose Dercourt) and the Concerto for Two Pianos (recorded in May 1957). He supervised the 1961 world premiere recording of his Gloria, which was conducted by Georges Prêtre. His recordings were released by RCA Victor and EMI.

Critic Claude Rostand(fr) underlined the coexistence or alternation in Poulenc of the Catholic faith with artistic freedom. He wrote in a July 1950 Paris-Presse article that Poulenc was "A lover of life, mischievous, 'bon enfant,' tender and impertinent, melancholy and serenely mystical, half monk and half delinquent (le moine et le voyou). When the second part of his Gloria caused a scandal, Poulenc said, "I was thinking when I composed it of these frescoes by Gozzoli with angels sticking out their tongues, and of those grave benedictines I saw once playing football."

Poulenc's music is fundamentally tonal, although he made use of harmonic innovations such as pandiatonicism and chromatically altered chords. In some of his last works he used 12-tone rows, but Poulenc never questioned the validity of traditional tonic-dominant harmony. Lyrical melody pervades his music and underlies his important contributions to vocal music, particularly French art song.

Some writers consider Poulenc one of the first openly gay composers. His first serious relationship was with painter Richard Chanlaire, to whom he wrote on his Concert champêtre score: "You have changed my life, you are the sunshine of my thirty years, a reason for living and working". He also once said, "You know that I am as sincere in my faith, without any messianic screamings, as I am in my Parisian sexuality."

In 1923, Poulenc was "unable to do anything" for two days after the death from typhoid fever of twenty-year-old novelist Raymond Radiguet, Jean Cocteau's lover. However, two weeks later he made lewd jokes about a male ballet dancer to Sergei Diaghilev at the rehearsals of Les Biches.Then in 1930 came the death of Raymonde Linossier, a woman to whom he had proposed a marriage of convenience in 1928 and had remained a "cherished friend" until her death. In 1936, Poulenc was profoundly affected by the death of another composer, Pierre-Octave Ferroud. This led him to his first visit to the shrine of the Black Virgin of Rocamadour. Here, before the statue of the Madonna with a young child on her lap, Poulenc experienced a life-changing transformation. Thereafter, he produced a sizeable output of liturgical music or compositions based on religious themes.

In 1949, Poulenc experienced the death of a friend, the artist Christian Bérard, for whom he composed his Stabat Mater (1950).

Poulenc died of heart failure in Paris on 30 January 1963 and is buried at the Père Lachaise Cemetery.