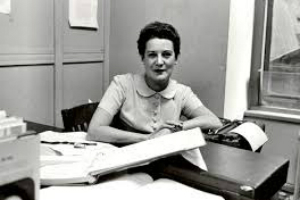 Sylvia Field Porter (18 June 1913 - 5 June 1991) was an American economist and journalist. At the height of her career, her readership was greater than 40 million people.

Born Patchogue, New York, on Long Island as Sylvia Field Feldman, she aspired to be an author at the age of six. Originally majoring in English literature, she switched to economics and finance after the Stock Market Crash of 1929. It has been suggested that her fiancee, bank employee Reed Porter, was relying upon Sylvia to explain the complications of the worldwide financial panic. They were married in 1931.

Starting in 1934 as "S.F. Porter", she published a newsletter devoted exclusively to U.S. government bonds, and was able to persuade the New York Post to hire her to write a thrice-weekly financial column.

From there, she began writing a financial column for American Banker, and published How To Make Money in Government Bonds (1939), the first book to cover all phases of government finance as well as to explain it in plain language. This was followed by If War Comes to the American Home, which relied upon simple language and interesting anecdotes to explain national defense to the average reader. In 1938, S.F. Porter became financial editor for the Post. It was not until 1942 that most of Porter's avid readers learned that their most trusted financial wizard was not a wise old man, but an attractive 29 year old woman. The Post had concluded, correctly, that the widely-respected columnist would be accepted regardless of gender. The "revelation" paved the way for Sylvia Porter to go on the radio, and the program What Can I Do? began regular broadcast from New York's WJZ.

In 1959, Porter received an honorary degree from Bates College. She continued to add to her bibliography of bestsellers about the world of finance. In 1975, she published Sylvia Porter's Money Book, subtitled "How to Earn It, Spend It, Save It, Invest It, Borrow It and Use It to Better Your Life". In addition to her regular newspaper column, Porter wrote monthly articles for the Ladies Home Journal during the years 1965 to 1982. After 43 years with the Post, she hired on with the New York Daily News in 1978. From 1984 to 1987, she had 400,000 subscribers to her magazine, Sylvia Porter's Personal Finance. In the 1980s, her name was attached to a series of Personal Finance software packages for home computers. Her final work was Your Finances in the 1990s. She died on June 5, 1991, in Pound Ridge, New York.