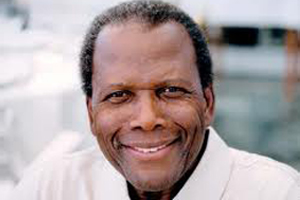 A long-term veteran of many fine films who made his debut in 1949 in "No Way Out." His debut film was followed by the Oscar-nominated film "The Defiant Ones," 1958 and "Lilies of the Field," 1963, for which he won the Best Actor Oscar.

Born in Miami, Poitier grew up on Cat Island in the Bahamas, the youngest of seven kids. His dad was a tomato farmer and his mom, Evelyn, was a shy, sensitive woman with whom he was very close. He credits her for teaching him to use "please," and "thank you," and "may I?" as the tools to get his foot in the door. When he was done with his chores he spent a lot of time by himself just roaming around, walking the beaches and relating with the elements, the birds and the trees. He had little formal education, entering school when he was 11 and finished a year and a half later. He could barely read and write.

At 15, he went to live with his brother in Miami where he first encountered racism. Finding this incomprehensible, he challenged it, heading North to New York at 16. He slept on the roof of the Brill Building and got a job washing dishes. He'd never seen a subway or an elevator and couldn't dial a telephone. When he was arrested for sleeping in Pennsylvania Station, he joined the army, lying about his age.

After being discharged, he returned to New York to wash dishes. He answered an ad at the American Negro Theatre, telling them that he was an actor and making up a study history. The ruse failed and he was thrown out. Not accepting defeat, he spent months listening to voices on the radio to overcome his accent and he learned to read from a waiter where he worked. He then persuaded the American Negro Theatre to take him on as a student, making a deal to be their janitor.

Poirier's first break came when he was understudying for Harry Belafonte in "Days of Our Youth." In a classic tradition, Belafonte missed a performance, Poitier went on and a Broadway producer spotted him. He was put in a role in "Lysistrata," his first job as a paid actor. He toured in "Anna Lucasta," after which director Joseph Mankiewicz cast him in "No Way Out," 1952, which brought him to Hollywood.

Averaging one or two pictures a year he performed in such films as "Cry, the Beloved Country," 1952, "The Blackboard Jungle," 1955, "The Defiant Ones," 1958, "Lilies of the Field," for which he won an Oscar for Best Actor in 1963 and "To Sir With Love," 1967. A trailblazing black actor of the 1950's, '60s, and '70s, he made 42 films and wrote his autobiography, "This Life." He founded a production company in 1972 when his old friend Harry Belafonte approached him with a script for "Buck and the Preacher." When differences arose and the director left, Poitier went on to direct the film himself. Since then he has directed a handful of films, including "Stir Crazy," with Richard Pryor and Gene Wilder and "Ghost Dad," 1990. In 1974, Queen Elizabeth made him an honorary knight. In 1988, after a ten-year absence, he starred in "Shoot To Kill," and "Little Nikita."

Poitier was first married in 1950 to Juanita Hardy and they had four daughters; Beverly, Pamela, Sherri, and Gina. Juanita was very easygoing and he very driven; the marriage didn't last and they divorced in 1965. Following an eight-year affair with Diahann Carroll, Poitier met the Canadian-born actress Joanna Shimkus. The married in 1976 and had two daughters; Anika and Sydney.