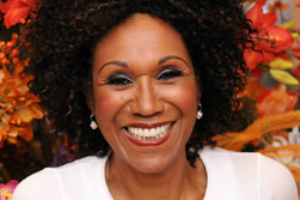 Ruth Pointer (born March 19, 1946) is an American R&B singer, best known for being the eldest member of The Pointer Sisters.

Pointer was born in Oakland, California. She began her vocal training as a director of a junior choir in her father's church.

Joining her sisters in 1972, the Pointer Sisters released their first album in 1973. The group eventually found fame with songs like "Yes We Can Can" (1973), their country crossover hit, "Fairytale" (1974) and "How Long (Betcha Got a Chick on the Side)" before Bonnie's exit in 1977. Continuing as a trio, the group found their biggest success covering tunes of rock, pop and New Wave with singles such as "Fire" (1978), "He's So Shy" (1980), and "Slow Hand" (1981). The group found its biggest success with the release of the Break Out album in 1983 which featured hits such as "Automatic", "Jump (For My Love)", a re-released version of "I'm So Excited", "Neutron Dance", and "Baby Come And Get It". It's notable for featuring Ruth's lead vocals on "Automatic" and "Neutron Dance", which hit the top ten of the Billboard Hot 100 Chart and led to the group winning two Grammy Awards. Of the original members, Ruth, along with her sister Anita, are still active with The Pointer Sisters. They were joined by Ruth's daughter, Issa, in the 1990s. The group was given a star on the Hollywood Walk of Fame in 1994.

Ruth Pointer's daughter, Issa Pointer, is from a 1977 relationship with the former Temptations member Dennis Edwards. Her son, Malik, is also a singer with his band Fat Sam. Granddaughter Sadako Johnson as well as Issa (Sadako's aunt) occasionally serve as fill ins for absent members of the Pointer Sisters during performances.