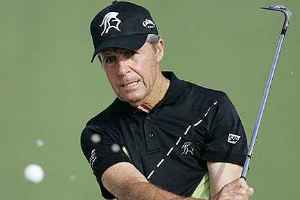 Gary Player DMS; OIG (born 1 November 1935) is a professional golfer from South Africa, widely regarded as one of the greatest players in the history of golf.

At the age 29, Player won the 1965 U.S. Open and became the only non-American to win all four majors, known as the career Grand Slam. Player became only the third golfer in history to win the Grand Slam, following Ben Hogan and Gene Sarazen. Since then, only Jack Nicklaus and Tiger Woods have won the Grand Slam. Player has won 165 tournaments on six continents over six decades and was inducted into the World Golf Hall of Fame in 1974.

Born in Johannesburg, Player has logged more than 25 million kilometres (15 million miles) in travel, which is more than any other athlete. Nicknamed the Black Knight, Mr. Fitness, and the International Ambassador of Golf, Player is also a renowned golf course architect with more than 325 design projects on 5 continents throughout the world. He has also authored or co-written 36 golf books.

He operates The Player Foundation, which has a primary objective of promoting underprivileged education around the world. In 1983, The Player Foundation established the Blair Atholl Schools in Johannesburg, South Africa, which has educational facilities for more than 500 students from kindergarten through eighth grade. In 2013 it celebrated its 30th Anniversary with charity golf events in London, Palm Beach, Shanghai and Cape Town, bringing its total of funds raised to over US $50 million.

In 2013 the Gary Player Invitational charity series of events will be staged in Augusta, Georgia after the Masters; in London after The Open Championship; in Shanghai prior to the HSBC Championship and in George, South Africa just before the Nedbank Golf Challenge at the Gary Player Country Club.

Gary Player swings at the 2009 GPI in Edinburgh, Scotland

Gary Player was born in Johannesburg, South Africa, the youngest of Harry and Muriel Player's three children. When he was eight years old his mother died from cancer. Although his father was often away from home working in the gold mines, he did manage to take a loan in order to buy a set of clubs for his son Gary to begin playing golf. The Virginia Park golf course in Johannesburg is where Player first began his love affair with golf. At the age of 14, Player played his first round of golf and parred the first three holes. At age 16, he announced that he would become number one in the world. At age 17, he became a professional golfer.

Player married wife Vivienne Verwey (sister of professional golfer Bobby Verwey) on 19 January 1957, four years after turning professional. Together they have six children: Jennifer, Marc, Wayne, Michele, Theresa and Amanda. He is also a grandfather to 21 grandchildren. During the early days of his career Player would travel from tournament to tournament with wife, six children, nanny and a tutor in tow.

Gary Player is the brother of Ian Player, a notable South African environmental educator and conservationist.

Player is one of the most successful golfers in the history of the sport, ranking third (behind Roberto de Vicenzo and Sam Snead) in total professional wins, with at least 166, and tied for fourth in major championship victories with nine. Along with Arnold Palmer and Jack Nicklaus he is often referred to as one of "The Big Three" golfers of his era – from the late 1950s through the late 1970s – when golf boomed in the United States and around the world, greatly encouraged by expanded television coverage. Along with Gene Sarazen, Ben Hogan, Jack Nicklaus, and Tiger Woods, he is one of only five players to win golf’s "career Grand Slam". He completed the Grand Slam in 1965 at the age of twenty-nine. Player was the second multi-time majors winner from South Africa, following Bobby Locke, then was followed by Ernie Els, and Retief Goosen.

Player played regularly on the U.S. based PGA Tour from the late 1950s. He led the money list in 1961, and went on to accumulate 24 career titles. He also played an exceptionally busy schedule all over the world, and he has been called the world's most traveled athlete, clocking up more than 15 million miles. He has more victories than anyone else in the South African Open (13) and the Australian Open (7). He held the record for most victories in the World Match Play Championship, with five wins, from 1973 until 1991 when this feat was equalled by Seve Ballesteros, finally losing his share of the record in 2004, when Ernie Els won the event for a sixth time. Player was ever-present in the top ten of Mark McCormack's world golf rankings from their inception in 1968 until 1981; he was ranked first or second on those rankings in 1969, 1970 and 1972, each time to Jack Nicklaus.

He was the only player in the 20th century to win the British Open in three different decades. His first win, as a 23-year-old in 1959 at Muirfield, came after he double-bogeyed the last hole, and broke down in tears thinking he had lost his chance, but none of the remaining players on the course could match the clubhouse lead he had set. In 1974, he became one of the few golfers in history to win two major championships in the same season. Player last won the U.S. Masters in 1978, when he started seven strokes behind 54-hole leader Hubert Green entering the final round, and won by one shot with birdies at seven of the last 10 holes for a back nine 30 and a final round 64. One week later, Player came from seven strokes back in the final round to win the Tournament of Champions. In 1984, at the age of 48, Player nearly became the oldest ever major champion, finishing just behind Lee Trevino at the PGA Championship. And in gusty winds at the 1998 Masters, he became the oldest golfer ever to make to the cut, breaking the 25-year-old record set by Sam Snead. Player credited this feat to his dedication to the concept of diet, health, practise and golf fitness.

Being South African, Player never played in the Ryder Cup in which American and European golfers compete against each other. Regarding the event, Player remarked, "The things I have seen in the Ryder Cup have disappointed me. You are hearing about hatred and war." He was no longer an eligible player when the Presidents Cup was established to give international players the opportunity to compete in a similar event, but he was non-playing captain of the International Team for the Presidents Cup in 2003, which was held on a course he designed, The Links at Fancourt, in George, South Africa. After 2003 ended in a tie, he was reappointed as captain for the 2005 Presidents Cup, and his team lost to the Americans 15.5 to 18.5. Both Player and Jack Nicklaus were appointed to captain their respective teams again in 2007 in Canada; the United States won.

In 2000 he was voted "Sportsman of the Century" in South Africa. In 1966, Gary Player was awarded the Bob Jones Award, the highest honour given by the United States Golf Association in recognition of distinguished sportsmanship in golf. He was inducted into the World Golf Hall of Fame in 1974. The "Gary Player – A Global Journey" exhibition was launched by the Hall of Fame as of March 2006.

In 2000, Player was ranked as the eighth greatest golfer of all time by Golf Digest magazine.

In 2002, Player was voted as the second greatest global golfer of all time by a panel of international media, golf magazines and fellow professionals conducted by the leading Golf Asia Magazine.

On 10 April 2009, he played for the last time in the Masters, where he was playing for his record 52nd time — every year since 1957 except for 1973, when he was ill. After Nicklaus and Palmer, he was the last of the Big Three to retire from this tournament, a testament to his longevity.

On 23 July 2009, at the age of 73, Player competed in the Senior British Open Championship at Sunningdale Golf Club, 53 years after capturing his maiden European Tour victory at the Berkshire venue.

Augusta National Golf Club and the Masters announced on 5 July 2011 that Player had been invited to join Jack Nicklaus and Arnold Palmer as an honorary starter. The Big Three were reunited in this capacity starting with the 2012 tournament.