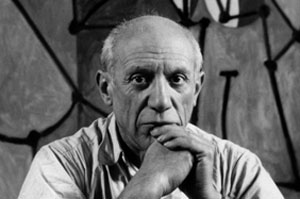 Picasso's father was Jose Ruíz, a painter whose specialty was the naturalistic depiction of birds and who for most of his life was also a professor of art at the School of Crafts and a curator of a local museum. The young Picasso showed a passion and a skill for drawing from an early age; according to his mother, his first word was "piz," a shortening of lápiz, the Spanish word for pencil. It was from his father that Picasso had his first formal academic art training, such as figure drawing and painting in oil. Although Picasso attended carpenter schools throughout his childhood, often those where his father taught, he never finished his college-level course of study at the Academy of Arts (Academia de San Fernando) in Madrid, leaving after less than a year.

Picasso's friend Gertrude Stein, who had more than 80 sittings for this 1906 portrait.After studying art in Madrid, he made his first trip to Paris in 1900, the art capital of Europe. In Paris, he lived with Max Jacob (journalist and poet), who helped him learn French. Max slept at night and Picasso slept during the day as he worked at night. They were times of severe poverty, cold and desperation. Much of his work had to be burned to keep the small room warm. In 1901, with his friend Soler, he founded the magazine Arte Joven in Madrid. The first edition was entirely illustrated by him. From that day, he started to simply sign his work Picasso, while before he signed Pablo Ruiz y Picasso. In the early years of the twentieth century, Picasso, still a struggling youth, divided his time between Barcelona and Paris, where in 1904, he began a long term relationship with Fernande Olivier. It is she who appears in many of the Rose period paintings. After acquiring fame and some fortune, Picasso left Olivier for Marcelle Humbert, whom Picasso called Eva. Picasso included declarations of his love for Eva in many Cubist works.

In Paris, Picasso entertained a distinguished coterie of friends in the Montmartre and Montparnasse quarters, including André Breton, Guillaume Apollinaire, and writer Gertrude Stein. He maintained a number of mistresses in addition to his wife or primary partner. Picasso was married twice and had four children by three women.

In 1918 Picasso married Olga Khokhlova, a ballerina with Sergei Diaghilev's troupe, for whom Picasso was designing a ballet, Parade, in Rome. Khokhlova introduced Picasso to high society, formal dinner parties, and all the social niceties attendant on the life of the rich in 1920s Paris. The two had a son, Paulo, who would grow up to be a dissolute motorcycle racer and chauffeur to his father. Khokhlova's insistence on social propriety clashed with Picasso's bohemian tendencies and the two lived in a state of constant conflict. In 1927 Picasso met 17 year old Marie-Thérèse Walter and began a secret affair with her. Picasso's marriage to Khokhlova soon ended in separation rather than divorce, as French law required an even division of property in the case of divorce, and Picasso did not want Khokhlova to have half his wealth. The two remained legally married until Khokhlova's death in 1955. Picasso carried on a long-standing affair with Marie-Thérèse Walter and fathered a daughter, Maia, with her. Marie-Thérèse lived in the vain hope that Picasso would one day marry her, and hanged herself four years after Picasso's death.

The photographer and painter Dora Maar was also a constant companion and lover of Picasso. The two were closest in the late 1930s and early 1940s and it was Maar who documented the painting of Guernica.

After the liberation of Paris in 1944, Picasso began to keep company with a young art student, Françoise Gilot. The two eventually became lovers, and had two children together, Claude and Paloma. Unique among Picasso's women, Gilot left Picasso in 1953, allegedly because of abusive treatment and infidelities. This came as a severe blow to Picasso.

He went through a difficult period after Gilot's departure, coming to terms with his advancing age and his perception that, now in his 70s, he was no longer attractive, but rather grotesque to young women. A number of ink drawings from this period explore this theme of the hideous old dwarf as buffoonish counterpoint to the beautiful young girl, including several from a six-week affair with Geneviève Laporte, who in June 2005 auctioned off the drawings Picasso made of her.

Picasso was not long in finding another lover, Jacqueline Roque. Roque worked at the Madoura Pottery, where Picasso made and painted ceramics. The two remained together for the rest of Picasso's life, marrying in 1961. Their marriage was also the means of one last act of revenge against Gilot. Gilot had been seeking a legal means to legitimize her children with Picasso, Claude and Paloma. With Picasso's encouragement, she had arranged to divorce her then husband, Luc Simon, and marry Picasso to secure her children's rights. Picasso then secretly married Roque after Gilot had filed for divorce in order to exact his revenge for her leaving him.

Picasso had constructed a huge gothic structure and could afford large villas in the south of France, at Notre-dame-de-vie on the outskirts of Mougins, in the Provence-Alpes-Côte d'Azur. Although he was a celebrity, there was often as much interest in his personal life as his art.

In addition to his manifold artistic accomplishments, Picasso had a film career, including a cameo appearance in Jean Cocteau's Testament of Orpheus. Picasso always played himself in his film appearances. In 1955 he helped make the film Le Mystère Picasso (The Mystery of Picasso) directed by Henri-Georges Clouzot.

Pablo Picasso died on April 8, 1973 in Mougins, France, while he and his wife Jacqueline entertained friends for dinner. His final words were "Drink to me, drink to my health, you know I can't drink any more." He was interred at Castle Vauvenargues' park, in Vauvenargues, Bouches-du-Rhône. Jacqueline Roque prevented his children Claude and Paloma from attending the funeral.