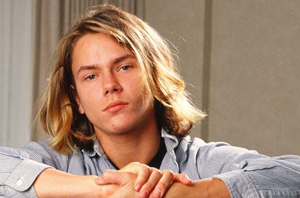 River Jude Phoenix (August 23, 1970 – October 31, 1993) was an Academy Award-nominated American film actor. He was listed on John Willis' Screen World, Vol. 38 as one of twelve "promising new actors of 1986", and was hailed as highly talented by such critics as Roger Ebert and Gene Siskel. However, his career was cut short when he died of an overdose of heroin and cocaine on Halloween morning at age 23. He was the older brother of Joaquin Phoenix.

His father, John Lee Bottom, came from a Catholic California family, while his mother, Arlyn Sharon Dunetz, was born in the Bronx to Margaret and Meyer Dunetz, Orthodox Jewish emigrants from Hungary and Russia. The two joined the Children of God religious group in the late 1960s and became missionaries, traveling throughout South America. Returning to the United States in 1977, they adopted the surname "Phoenix" in April 1979. River Phoenix was born River Jude Bottom in Metolius, Oregon, five miles south of Madras, Oregon. Both he and his mother have said that he was named after the River of Life in Herman Hesse's novel Siddhartha, and that his middle name comes from the Beatles song "Hey Jude". He grew up in poverty, although contrary to popular belief, he was not born in a log cabin. He and his sister often had to work as street performers to make money for the family.

He and his family, to whom River remained very close, were all vegans. He believed that eating animals was wrong, though it was his younger brother, Joaquín, who, at the age of four, persuaded the family not to eat meat any longer. The family were on a ship from Venezuela to Florida at the time, and Joaquin had seen fishermen killing fish by banging their heads against the bulkheads. When he played the role of Guthrie in the TV version of Seven Brides for Seven Brothers in 1982, his mother insisted on him using a rope for a belt; he steadfastly refused to wear leather.

In an interview with Details magazine in November 1991, Phoenix claimed he lost his virginity at age four while in the Children of God. The magazine quote him as saying "But I've blocked it out... I was completely celibate from 10 to 14." In March of 1994, Esquire magazine quoted River as speaking angrily of the cult: "They're disgusting... they're ruining people's lives."

Family
Phoenix had four siblings: one brother and three sisters. Joaquin Phoenix has since become a successful actor in his own right. His sisters Rain and Summer are actresses as well; Rain also performs as the lead singer in a band called The Papercranes. River's second youngest sister Liberty quit acting when she was still a child.

Career
Phoenix was one of five siblings who pursued careers in show business, encouraged by their parents. He had significant juvenile roles in Joe Dante's Explorers (1985); Rob Reiner's coming of age picture Stand By Me (1986) which first brought Phoenix to public prominence; Peter Weir's lyrical The Mosquito Coast (1986) where Phoenix played the son of Harrison Ford and Helen Mirren; A Night in the Life of Jimmy Reardon (1988) (this film deviated considerably from the original director's cut, which is now available under the title Aren't You Even Gonna Kiss Me Goodbye?); and Little Nikita (1988) with Sidney Poitier; and was nominated in 1989, at the age of 18, for an Oscar for Best Supporting Actor (as well as for a Golden Globe) and received the Best Supporting Actor honor from the National Board of Review for his role in Sidney Lumet's Running on Empty (1988), considered by critics to be one of River Phoenix's finest films.

He also portrayed the teenage Indiana Jones in Indiana Jones and the Last Crusade (1989). River met actor Keanu Reeves while Reeves was filming on River's brother's movie set and later went on to star opposite Reeves in Gus Van Sant's hauntingly weird avant-garde My Own Private Idaho for which Phoenix won Best Actor honors at the Venice Film Festival, as well as from the National Society of Film Critics. His friendship with both Reeves and Van Sant continued beyond the movie. At the press screening of My Own Private Idaho at the New York Film Festival, River accurately predicted that a large number of gay-themed films were "on the horizon."

After losing-out on the Brad Pitt role in Robert Redford's film A River Runs Through It, Phoenix teamed with Redford on-screen and, once again, with Sidney Poitier for the middling heist thriller Sneakers (1992). River then appeared in Peter Bogdanovich's country music themed film, The Thing Called Love (1993); it was perhaps the only film in which Phoenix's performance somehow didn't seem quite up to par, and would be his final completed picture before his death. His co-star in the film Samantha Mathis would become Phoenix's girlfriend and would be present on the night of his death.

River Phoenix appeared on Red Hot Chili Peppers guitarist John Frusciante's second solo album Smile From the Streets You Hold on the song "Height Down." Phoenix also had his own band called Aleka's Attic, which included his sister Rain, Sasa Raphael, and, on occasion, Flea of the Red Hot Chili Peppers. Phoenix was also close friends with Michael Stipe of the band R.E.M..

He was reportedly embarrassed by advertisements promoting him as a teeny-bop sex symbol, and usually refused to smile for photographs.

After his death in 1993, his final completed film Silent Tongue (1994) which he had filmed before working on A Thing Called Love' released a year later.

River had been considered for the role of Jim Carroll, a drug addicted teen in the 1995 drama the The Basketball Diaries. After his death, Leonardo DiCaprio was cast.

Later, River and Joaquin Phoenix became the first brothers in Hollywood history to both be nominated for an Academy Award in the acting category.

Death
On October 31, 1993, Phoenix died at the age of 23 from an accidental drug overdose of heroin and cocaine (speedball) outside the Viper Room, a Hollywood night club partly owned by actor Johnny Depp. An autopsy also revealed traces of cough syrup and cannabis in his blood. On the night of Phoenix's death, he was in the bathroom doing drugs with various friends and drug dealers. It is reported that someone offered him some Persian Brown (a powerful form of methamphetamine mixed with opiates, which is then snorted) and soon after consuming the drug Phoenix became ill, then, when he started to panic, was offered a valium to help calm him down. Red Hot Chili Peppers bassist Flea, was present at the time, as was John Frusciante. Johnny Depp and Flea were on stage playing music when they noticed Phoenix staggering out of the night club. Both Depp and Flea jumped off of the stage and followed Phoenix outside. Soon after leaving The Viper Room, River collapsed on the sidewalk and started going into seizures for a couple of minutes. His brother, Joaquin, was present at the scene, along with River's then-girlfriend actress Samantha Mathis, and dialed 911, unable to determine whether he was breathing or not. River had in fact already stopped breathing. He was rushed to the Cedars-Sinai Medical Center, but attempts to resuscitate him were unsuccessful. He was pronounced dead at 1:51 AM PST on the morning of October 31, 1993. Johnny Depp now closes The Viper Room every October 31 in memory of River's death.

At the time of his death, Phoenix was filming the movie Dark Blood, which, although 90% completed, was never released, as Phoenix's death made it impossible for the filmmakers to film several key scenes. He was also due to start filming on Interview With the Vampire as the interviewer, Daniel Molloy. Christian Slater eventually took on the role, donating his salary for the film to charity in honor of Phoenix. Phoenix was cremated in Gainesville, Florida, three days later, and the ashes were spread at the family's ranch near Micanopy, a few miles south of Gainesville.

Prone to spells of worsening depression and compulsivity, River hinted in interviews at having been abused by the members of the oft-investigated cult to which he had belonged as a small child. Although the details of the alleged mistreatment remain unclear, it has been strongly suggested that the experience played a key role in his descent into substance abuse towards the end of his life (statistically, a common problem among those who have undergone certain forms of childhood abuse trauma).

Prior to his death, River Phoenix's image—one he bemoaned in interviews—had been squeaky-clean, due in part to the public discussion of his various social, political, humanitarian and dietary interests not always popular in the '80s; as a result, his death was considered one of show-business's most shocking and tragic, and elicited a vast amount of coverage from the media at the time. Friends and family became silent for many years on the subject of their fallen loved-one, and mostly remain silent even to this day.

In his 2004 interview book Who The Hell's In It, Peter Bogdanovich, one of the last directors to work with Phoenix, stresses that the actor did not make the impression of being heavily involved with drugs. Interestingly, Bogdanovich quotes actor Tony Curtis, who "said cryptically, but with considerable weight" on a TV talk-show, that it was "difficult to comprehend how much envy" there was in Hollywood.

Shortly before his Halloween 1993 demise, River, whose extra-curricular activities had yet to be known publicly, stated that, "addiction is not just for bad people or scum-bags -it's a universal disease."

Fans and film critics alike have often observed the uncanny parallels to his highly unusual life history --and moments seemingly prophetic of his death-- reflected in his motion pictures.