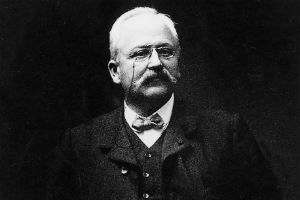 Armand Peugeot (March 26, 1849 – January 2, 1915) was a French industrialist, pioneer of the automobile industry and the founder of the French firm Peugeot.

Armand Peugeot was born on 26 March 1849 in Herimoncourt, in eastern France. He was the son of Emile Peugeot and Jean Pierre. The family had a metal working business, producing a range of practical goods such as springs, saws, spectacle frames and coffee grinders. In 1872 he married Sophie Leonie Fallot (1852-1930) and they had five children, but their only son, Raymond, died in 1896. Armand Peugeot died on 2 January 1915 in Neuilly-sur-Seine, Paris.

He was a graduate of the École Centrale, a prestigious engineering school in Paris. In 1881 Armand travelled to England where he saw the potential of bicycles and their manufacture.

From 1865, Armand and his cousin Eugène became involved with the running of the company, then called Peugeot Frères Aînés. They took it into cycle manufacture in 1882, and exhibited a steam powered tricycle at the 1889 World Fair in Paris. They created their first car in their workhouse which is located in eastern France.

By 1892, the company name was Les Fils de Peugeot Frères, and they had begun to manufacture cars with Daimler engines. Armand wanted to increase production, but Eugène did not want to commit the company to the necessary investment. So, on 2 April 1896, Armand set up his own company, Société Anonyme des Automobiles Peugeot. He built a factory at Audincourt, dedicated to the manufacture of cars with an internal combustion engine.

In February 1910, without a male heir, he agreed to merge his company with Eugène’s. When he stepped down from managing the company in 1913, Peugeot were the largest car manufacturer in France, producing 10,000 cars per year.