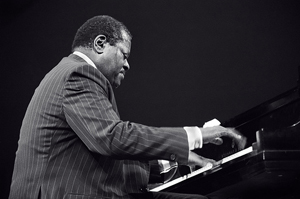 Called the "Maharajah of the keyboard" by Duke Ellington, Oscar Peterson is considered to have been one of the greatest pianists of all time. He played to audiences worldwide in a career lasting more than 60 years.

Oscar Peterson grew up in the neighbourhood of Little Burgundy, Montreal. It was in this predominantly black neighbourhood that he found himself surrounded by the jazz culture that flourished in the early 20th century. At five years old, Peterson began honing his skills with the trumpet and piano. However, by the age of seven, after a bout of tuberculosis, he directed all his attention to the piano.

Some of the artists who influenced Peterson during the early years were Teddy Wilson, Nat "King" Cole, James P. Johnson and the legendary Art Tatum, to whom many have tried to compare Peterson in later years. One of his first exposures to the musical talents of Art Tatum came early in his teen years when his father played Art Tatum's Tiger Rag for him, and Peterson was so intimidated by what he heard that he allegedly restrained himself from touching the piano for nearly two months. Tatum and Peterson later became good friends, albeit Peterson was always shy to play piano in Tatum's presence.

Peterson has also credited his sister Daisy Sweeney — a noted piano teacher in Montreal who also taught several other noted Canadian jazz musicians — with being an important teacher and influence on his career.

The important step in his career was joining impresario Norman Granz's labels (especially Verve records) and Granz's Jazz at the Philharmonic package. Granz discovered Peterson in a peculiar manner: as the impresario was being taken to the Montreal airport by cab, the radio was playing a live broadcast of Oscar Peterson at a local night club. He was so smitten by what he heard that he ordered the driver to take him to the club so he could meet the pianist. So was born a lasting relationship, and Granz remained Peterson's manager for much of the latter's career.

He soon developed a reputation as a technically brilliant and melodically inventive jazz pianist, and became a regular on Canadian radio. His United States introduction was at Carnegie Hall, New York City, New York, in 1949 by Norman Granz; owing to union restrictions his appearance could not be billed.

In the early 1950s, Peterson began performing with Ray Brown and Charlie Smith as the Oscar Peterson Trio. Shortly afterward the drummer Smith was replaced by guitarist Irving Ashby, formerly of the Nat King Cole Trio. Ashby, who was a swing guitarist, was soon replaced by Barney Kessel. Kessel tired of touring after a year, and was succeeded by Herb Ellis. As Ellis was white, Peterson's trios were racially integrated, a controversial move at the time that was fraught with difficulties with segregationist whites and blacks.

"Oscar Peterson trio at the Stratford Shakespearean Festival" is widely regarded as the landmark album in Peterson's career, and one of the most influential trios in jazz. All three musicians were equal contributors involved in a highly sophisticated improvisational interplay. When Herb Ellis left the group in 1958, Peterson and Brown believed they could not adequately replace Ellis.

His next trio turned into a quartet after he added a drummer — first Gene Gammage for a brief time, then Ed Thigpen. In this group Peterson became the dominant soloist. Later members of the group were Louis Hayes, Bobby Durham, Ray Price, Sam Jones, and George Mraz.

Since the late 1950s, when Oscar Peterson gained worldwide recognition as one of the leading pianists in jazz, he played in a variety of settings: solo, duo, trio, quartet, small bands, and big bands. However, his solo piano recitals, as well as his solo piano recordings were rare, until he chose to make a series of solo albums titled "Exclusively for my friends." These solo piano sessions, made for the MPS label, were Peterson's response to the emergence of such stars as Bill Evans and McCoy Tyner.

Some cognoscenti assert that Peterson's best recordings were made for the MPS label in the late 1960s and early 1970s. For some years subsequently he recorded for Granz's Pablo Records after the label was founded in 1973 and in more recent years for the Telarc label.

In the 1980s he played successfully in a duo with pianist Herbie Hancock. In the 1990s Peterson made performances and recordings with his protege Benny Green.

Oscar Peterson wrote pieces for piano, for trio, for quartet and for big band. He also wrote several songs, and made recordings as a singer. Probably his best-known composition is "Canadiana Suite."

Oscar Peterson taught piano and improvisation in Canada, mainly in Toronto. He also published his original jazz piano etudes for practice. However, he asked his students to study the music of Johann Sebastian Bach, especially the Well Tempered Clavier, the Goldberg Variations, and the The Art of Fugue, considering this piano pieces essential for every serious pianist.

Peterson had arthritis since his youth, and in later years could hardly button his shirt. He also had hip replacement surgery in the early 1990s. Although the surgery was successful, his mobility suffered.

Somewhat later, in 1993, Peterson suffered a serious stroke that weakened his left side and sidelined him for two years. Also in 1993 incoming Prime Minister and longtime Peterson fan and friend Jean Chrétien offered Peterson the position of Lieutenant-Governor of Ontario, but according to Chrétien he declined, citing the health problems from his recent stroke.

After the stroke, Peterson was recuperating for about two years. He gradually regained mobility and control of his hand. However, his virtuosity was never restored to the original level. In 1995 he returned to public performances on a limited basis, and also made several live and studio recordings for the Telarc label. In 1997 he received a Grammy for Lifetime Achievement and an International Jazz Hall of Fame Award, another indication that Peterson continued to be regarded as one of the greatest jazz musicians ever to play.

In 2003, Peterson recorded the DVD A Night in Vienna for the Verve label. He continued to tour the U.S. and Europe, though maximally one month a year, with a couple of days rest between concerts to recover his strength. His accompanists consisted of Ulf Wakenius (guitar), David Young (bass) and Alvin Queen (drums), all leaders of their own groups.

His health declined rapidly in 2007. Peterson had to cancel his performance at the 2007 Toronto Jazz Festival and his attendance at a June 8, 2007 Carnegie Hall all-star performance in his honour, due to illness.

On December 23, 2007, Oscar Peterson died of kidney failure at his home in Mississauga, Ontario, a western suburb of Toronto.

Awards and recognitions
Begone Dull Care is an abstract film presentation of Oscar's music, released in 1949.

He has received the Roy Thomson Award (1987), a Toronto Arts Award for lifetime achievement (1991), the Governor General's Performing Arts Award (1992), the Glenn Gould Prize (1993), the award of the International Society for Performing Artists (1995), the Loyola Medal of Concordia University (1997), the Grammy Lifetime Achievement Award (1997), the Praemium Imperiale World Art Award (1999), the UNESCO Music Prize (2000), and the Toronto Musicians' Association Musician of the Year award (2001).

From 1991 to 1994 he was chancellor of York University in Toronto. The chancellor is the titular head of the university.

In 2004 the City of Toronto named the courtyard of the Toronto-Dominion Centre "Oscar Peterson Square".

The Peel District School Board named a school after Oscar Peterson.

On August 15, 2005 Peterson celebrated his 80th birthday at the HMV flagship store in Toronto. A crowd of about 200 gathered to celebrate with him there. Diana Krall sang happy birthday to him and also performed a vocal version of one of Peterson's songs "When Summer Comes". The lyrics for this version were written by Elvis Costello, Krall's husband. Canada Post unveiled a commemorative postage stamp in his honour. The event was covered by a live radio broadcast by Toronto jazz station, JAZZ.FM.

"Technique is something you use to make your ideas listenable," he once told jazz writer Len Lyons. "You learn to play the instrument so you have a musical vocabulary, and you practice to get your technique to the point you need to express yourself, depending on how heavy your ideas are."

"Miles Davis once commented, 'Nearly everything Peterson plays, he plays with the same degree of force. He leaves no holes for the rhythm section.' But this merely describes the difference between the two players; Davis did not have Peterson's powerful technique, and found a different kind of expression."

In 2005, the Oscar Peterson school opened in Mississauga, Ontario, ""I must tell you that this is a most unexpected and moving tribute. At one point I wish to offer thanks for this unexpected honour."