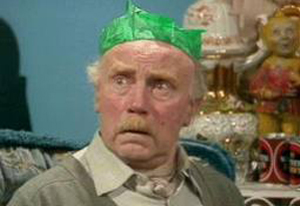 Lennard Pearce (9 February 1915 – 15 December 1984) was an English actor who worked mostly in the theatre, but also appeared in a number of British television programmes.

He landed his most notable TV role during the final few years of his life, starring as Edward "Grandad" Trotter in the popular sitcom, Only Fools and Horses from 1981 to 1984. (His name was Aulden (His name was never mentioned in the series but In the Xmas episode his son, Reg, greets him by calling him old'un (old one), not Edward in the series.

Pearce studied drama at the Royal Academy of Dramatic Art, in London and performed for the Entertainments National Service Association during World War II. In the 1950s Pearce starred in many West End plays. In the early 1960s, he understudied Doolittle in the original West End production of My Fair Lady. After 1965, he appeared in many plays at the National Theatre, including Much Ado About Nothing and Rosencrantz and Guildenstern are Dead. He worked with both Laurence Olivier and Anthony Hopkins on stage. In 1966, Pearce starred in Richard Sheridan's The Rivals, alongside David Jason, but they wouldn't meet again until 15 years later.

In 1975, Pearce played the Owl in a Winnie the Pooh play at the Phoenix Theatre, in London, and two years later, in 1977, Mr Witherspoon in Arsenic and Old Lace at the Westminster Theatre. He was also a member of the Royal Shakespeare Company.

Pearce also appeared in an episode of Minder named "The Balance of Power", which was shown on Halloween in 1984, along with playing Mr Coles in three episodes of Shroud for a Nightingale in March 1984. Coincidentally, the man who replaced Pearce as the senior member of the Trotter family, Buster Merryfield, also appeared in two episodes of the same series. Pearce's last TV appearance was on BBC 1's Children in Need, on 23 November 1984.

In 1980 Pearce was in a play at the Bristol Old Vic, when he kept losing balance and repeatedly falling asleep. He was diagnosed as having critical hypertension, and put on seven different tablets for it, taking these for the rest of his life.

On 12 December 1984, Pearce suffered a heart attack. He was rushed to the Whittington Hospital, admitted, and his condition improved. Two days later, Only Fools and Horses scriptwriter John Sullivan visited him, and assured Pearce that his place in the programme would be open for him when he recovered. However, Pearce suffered a second heart attack, and died instantly, on the night of 15 December 1984. Sullivan was phoned the following morning to be told the news, and he broke it to Pearce's Only Fools and Horses co-stars David Jason and Nicholas Lyndhurst, who were both devastated by Pearce's sudden death.

When Pearce died, production was underway of the Only Fools and Horses episode "Hole in One". Scenes he had filmed on location prior to his death were re-shot with Buster Merryfield as the replacement character Uncle Albert, and the episode was put back in the series. The episode "Strained Relations" begins in the wake of the death of the character Pearce had played.