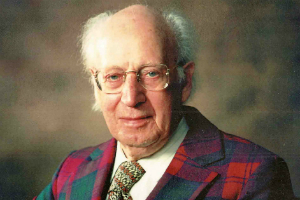 James McIntosh Patrick, RSA (1907 – 7 April 1998) was a Scottish painter, celebrated for his finely observed paintings of the Angus landscape and Dundee, Scotland, where he was based for most of his life.

Born in Dundee, the son of an architect and amateur artist who encouraged his son to draw and paint, he studied painting at Glasgow School of Art from 1924 to 1928, studying with Maurice Greiffenhagen, and in Paris. He continued his interest in etching which was very popular in the 1920s and was to prove a source of income for him during the Depression years. A foremost landscape painter, he began his career producing highly finished etchings, but when the market for these collapsed in the 1930s he turned towards painting in watercolour and oil.

He produced portraits and still life works but is known mainly for his paintings of cultivated landscapes in the Scottish countryside. They are often very wide in scope yet meticulously detailed. In this he has been compared to Bruegel. His style was traditional but his use of colour could be bold, as were some compositional aspects of several of his paintings. In Spring in Eskdale (1935) the scene seems to be viewed from a height, giving an almost aerial view, while in Stobo Kirk (1936) perspective is again deliberately but subtly distorted. Less unconventionally, his landscapes frequently make use of lanes, roads, waterways or other features leading from foreground to middle distance or beyond, drawing the viewer into the picture. This compositional trademark can be seen in one of his earliest landscapes, The Three Sisters, Glencoe (1934), Spring in Eskdale, and many of his later works.

Like many artists of the interwar period, he was profiled as an 'Artist of Note' in The Artist magazine, Vol XIV No 3, in November 1937.

He received many awards including the Guthrie Prize and was elected a full member of the Royal Scottish Academy in 1957.