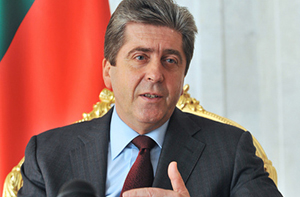 Georgi Sedefchov Parvanov (born 28 June 1957) has been president of Bulgaria since 22 January 2002. Parvanov became president after defeating his predecessor, Petar Stoyanov, in the second round of the November 2001 presidential election.

There is no law in Bulgaria banning former secret agents from occupying high state positions.

Parvanov is in favour of Bulgarian membership of NATO and the European Union. He identifies as a socialist but left the Bulgarian Socialist Party after he had been elected president, as the president is not allowed to be a political party member.

On election, his programme was to be a 'social' president, with care towards poor, unemployed and disadvantaged people. Parvanov helped in the creation of a three-party coalition composed of socialists (BSP), liberals (NDSV) and ethnic Turks (DPS) which formed a government on 16 August 2005.

Joined the Institute of History of the Bulgarian Communist Party as researcher: 1981
Main interest: the Bulgarian national issue and the early history of social democracy in Bulgaria
Senior Research Associate: 1989
Member of the Internet Society of Bulgaria since May 2001

Dozens of scientific articles, monographs and books, including:

Collaboration with Committee for State Security
In 2006 Parvanov admitted that before 1989 there was a file on him at the former Communist Security Service (Darzhavna Sigurnost, or DS) under the nickname Gotse. The file, which, like most files of the Security Service, hasn't been released to the public, does not prove beyond reasonable doubt that he has actually been an agent at the DS, and those who have had access to it disagree as to what it contains. According to Parvanov's own statement, the file only shows that he had been consulted as a historian in conjunction with the writing of a memoir book about events from one hundred years ago (). That was confirmed by two members of parliamentary commissions that had examined the files of the Security Service earlier — Bogomil Bonev and Veselin Angelov (, ). Two other members, Metodi Andreev and Evgeni Dimitrov (,), accused the first two of lying and asserted that the historical research had only been a prelude, followed by Parvanov's consent to work as an agent and write a report about his institute. According to them, the sole reason why that information hadn't been released by the commissions earlier had been that Parvanov's consent had only been reported by the agent who recruited him and couldn't be confirmed in the way required by law, i.e. with a declaration or a report signed in his own hand.

A year later, on 19 July 2007, a special Commission for Opening the Files determined officially that the President Georgi Parvanov was listed as a secret police collaborator of the former Communist Security Service from 1989 till 1993. He was recruited a month before Bulgaria's communist regime collapsed. It also became obvious that a large part of his secret file was missing.

2006 Elections
In the first round of the elections, incumbent Parvanov came first with 64.047% ahead of ultranationalist leader Volen Siderov with 21.486%, whom he had to face in a runoff, as Bulgarian law requires a turnout of at least 50% for a president to be elected in the first round. The voter turnout in the first round was 42.51%.

The second round saw a decisive Parvanov victory of around 75.9% as opposed to Siderov's 24.1%, meaning that Parvanov became the first person to be democratically reelected as President of Bulgaria. The turnout was 41.11%.