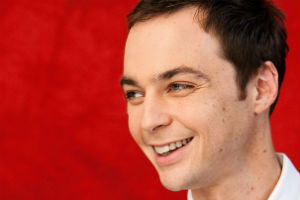 James Joseph "Jim" Parsons (born March 24, 1973) is an American television and film actor. He is best known for playing Sheldon Cooper on the CBS sitcom The Big Bang Theory, with his performance often cited as a significant reason for the program's success. He has received several awards for his performance, including the Television Critics Association award for the highest individual achievements in comedy, the National Association of Broadcasters Television Chairman's Award for a significant breakthrough in a specific art discipline, two consecutive Emmy Awards for Outstanding Lead Actor in a Comedy Series and the Golden Globe Award for Best Actor in a Television Series Musical or Comedy.

Parsons was born and raised in Houston, Texas, the older of two children] After playing the role of the Kola-Kola bird in a school production of The Elephant's Child at age six, Parsons was determined to become an actor. The young Parsons was heavily influenced by sitcoms, particularly Three's Company, Family Ties, and The Cosby Show. He attended Klein Oak High School in Spring, Texas, a northern suburb of Houston. Parsons points to a role in Noises Off during his junior year as the first time "I fully connected with the role I was playing and started to truly understand what it meant to be honest on stage."

After graduating from high school, Parsons received an undergraduate degree from the University of Houston. He was prolific during this time, appearing in 17 plays in 3 years. He was a founding member of Infernal Bridegroom Productions, and regularly appeared at the Stages Repertory Theatre. Parsons enrolled in graduate school at the University of San Diego in 1999. He was one of seven students accepted into a special two-year course in classical theater, taught in partnership with the Old Globe Theater. Program director Rick Seer recalled having reservations about admitting Parsons, saying, "Jim is a very specific personality. He's thoroughly original, which is one reason he's been so successful. But we worried, 'Does that adapt itself to classical theater, does that adapt itself to the kind of training that we're doing?' But we decided that he was so talented that we would give him a try and see how it worked out." Parsons enjoyed school, and told an interviewer that he would have pursued a doctorate in acting if possible: "school was so safe!...you frequently would surprise yourself by what you were capable of, and you were not surprised by some things. Parsons graduated in 2001 and moved to New York.

Parsons lives in Los Angeles. In May 2012, The New York Times reported that Parsons is gay and at the time had been in a relationship for the last ten years.

In New York, Parsons worked in Off-Broadway productions and made several television appearances. In a much-discussed 2003 Quiznos commercial, Parsons played a man who had been raised by wolves and continued to nurse from his wolf "mother". He had a recurring role on the television show Judging Am] and appeared on the television series Ed. Parsons also had minor roles in several movies, including Garden State and School for Scoundrels.

Parsons has estimated that he auditioned for between 15 and 30 television pilots, but on many of the occasions when he was cast, the show failed to find a television network willing to purchase it. The exception came with The Big Bang Theory. After reading the pilot script, Parsons felt that the role of Sheldon Cooper would be a very good fit for him.  Although he did not feel any sort of relationship with the character, he was enchanted by the dialogue structure, the way the writers "brilliantly use those words that most of us don't recognize to create that rhythm. And the rhythm got me. It was the chance to dance through that dialogue, and in a lot of ways still is."

In his audition, Parsons so impressed series creator Chuck Lorre that Lorre insisted on a second audition to see if Parsons could replicate the performance. Parsons was cast as Sheldon Cooper, a genius physicist with nonexistent social skills who interacts with his other nerdy friends and the attractive waitress who lives across the hall. The role requires Parsons to "rattle off line after line of tightly composed, rhythmic dialogue, and then do something with his face or body during the silence that follows." Parsons credits his University of San Diego training with giving him the tools to break down Sheldon's lines.

Television critic Andrew Dansby compares Parsons' physical comedy to that of Buster Keaton and other silent film stars. Lorre praises Parsons' instincts, saying that "You can't teach that." Lorre describes Parsons' "great sense of control over every part of his body, the way he walks, holds his hands, cocks his head, the facial tics" as "inspired". Reviewer Lewis Beale describes Parsons' performance as "so spot-on, it seems as if the character and the actor are the same person."

Parsons admits that the work is "more effort than I ever thought a sitcom would take. And that's really the fun of it."

In August 2009, Parsons won the Television Critics Association award for individual achievement in comedy, beating Alec Baldwin, Tina Fey, Steve Carell, and Neil Patrick Harris. He was nominated for Emmy awards in 2009 and 2010, winning in 2010 for Outstanding Lead Actor in a Comedy Series.

In September 2010, Parsons and costars Johnny Galecki and Kaley Cuoco signed new contracts, guaranteeing each of them $200,000 per episode for the fourth season of The Big Bang Theory, with substantial raises for each of the next three seasons. The three were also promised a percentage of the show's earnings. In January 2011, he won the Golden Globe award for Best Actor in a Television Series – Comedy (the award was presented by co-star Cuoco).

In 2011, Parsons appeared with Jack Black, Owen Wilson, Steve Martin, and Rashida Jones in the comedy film The Big Year. It was released in October. That same year, he appeared as the human alter ego of Walter, the newest Muppet introduced in The Muppets

On May 18, 2012, Parsons began appearing on Broadway as Elwood P. Dowd in a revival of Harvey.