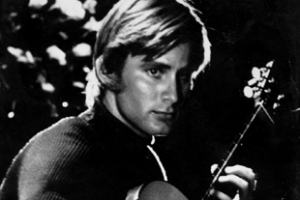 Christopher Parkening (born December 14, 1947) is an American classical guitarist. He holds the Chair of Classical Guitar at Pepperdine University under the title Distinguished Professor of Music.

Parkening was born in Los Angeles, California. His cousin Jack Marshall, a studio musician active in the 1960s, introduced Parkening to the recordings of Andrés Segovia when he was 11 and encouraged his classical guitar studies. By the age of 19 he had embarked on a professional career of regular touring and recording.

Segovia has stated that, "Christopher Parkening is a great artist—-he is one of the most brilliant guitarists in the world."

Parkening withdrew from public performances and recording seeking a respite from the demands of a professional career and a chance to pursue his hobby of flyfishing. During this period Parkening rarely played guitar choosing instead to focus his attention on his Montana ranch and trout stream. While visiting his Southern California home in winter; a neighbour invited Parkening to the Grace Community Church. Profoundly affected by this experience Parkening returned to recording and performing with a renewed sense of purpose. He then released Simple Gifts, an album of traditional Christian hymns arranged for classical guitar. His autobiography Grace Like a River was published in 2006.

Parkening has recorded extensively for Angel and EMI Classics. He has been nominated twice for a Grammy Award. Notable recordings include Parkening Plays Vivaldi featuring a selection of Baroque concertos, Pleasures of Their Company with soprano Kathleen Battle, produced by Patti Laursen and nominated for the 1986 Classical Record of the Year Grammy Award as well as the world premiere recording of Peter Warlock's Capriol Suite with the Academy of St. Martin in the Fields.

Christopher Parkening lives with his wife, Theresa, and son Luke in Southern California. He has taught a public master class at Pepperdine University.