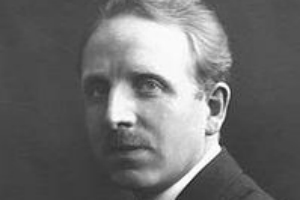 Paul Paray (24 May 1886 in Le Tréport – 10 October 1979 in Monte Carlo) was a French conductor, organist and composer. He is best remembered in the United States for being the resident conductor of the Detroit Symphony Orchestra for more than a decade.

Paray's father, Auguste, was a sculptor and organist at St. Jacques church, and leader of an amateur musical society. He put young Paul in the society's orchestra as a drummer. Later, Paul Paray went to Rouen to study music with the abbots Bourgeois and Bourdon, and organ with Haelling. This prepared him to enter the Paris Conservatoire. In 1911, Paul Paray won the Premier Grand Prix de Rome for his cantata Yanitza.

As World War I started, Paul Paray heeded the call to arms and joined the French Army. In 1914, he was a prisoner of war at the Darmstadt camp, where he composed a string quartet.

After the war, Paray was invited to conduct the orchestra of the Casino de Cauterets, which included players from the Lamoureux Orchestra. This was a springboard for him to conduct this Orchestra in Paris. Later he was music director of the Monte Carlo Orchestra, and president of the Concerts Colonne.

In 1922, Paray composed music for the Ida Rubinstein ballet Artémis troublée. That year he and the Spanish violinist Manuel Quiroga premiered his Violin Sonata. In 1931, he wrote the Mass for the 500th Anniversary of the Death of Joan of Arc, which was premiered at the cathedral in Rouen to commemorate the quincentenary of Joan of Arc's martyr death. In 1935, he wrote his Symphony No. 1 in C major, which was premiered at the Concerts Colonne. He composed his Symphony No. 2 in A major in 1941.

Paray made his American debut with the New York Philharmonic-Symphony Orchestra in 1939. In 1952, he was appointed music director of the Detroit Symphony Orchestra, conducting them in numerous recordings for Mercury Records' "Living Presence" series.

Paray could and did conduct the entire orchestral repertoire well, but he specialized in the French symphonic literature. One of Paray's most renowned recordings, made in October 1957, is that of the Saint-Saëns' Symphony No. 3 in C minor. The circumstances surrounding the recording were fortuitous. Paray had built the Detroit Symphony Orchestra into one of the world's most distinguished. Marcel Dupré, a friend and fellow student from childhood, was organist for the session. Dupré, as a young student, had pulled the organ stops for the composer Camille Saint-Saëns in a performance of the Symphony No. 3 in Paris, and the organ of Ford Auditorium in Detroit was well suited to the work. As well as being among the most authoritative readings of the work, the original analogue recording on the Mercury label remains an audiophile reference in vinyl, and the analogue-to-digital transfer produced by the original recording director Wilma Cozart for compact disc is also available from Mercury.

He married Yolande Falck in Cassis, France, on 25 August 1942. He was a National Patron of Delta Omicron, an international professional music fraternity.

The government of France awarded him its highest honor, the Grand-Croix de la Légion d'honneur, in 1975.