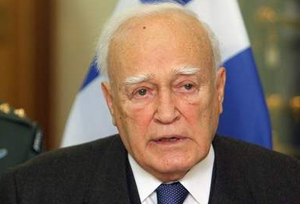 Karolos Papoulias (Greek: Κ?ρολος Παπο?λιας) was born in Ioannina. Papoulias is the son of Major General Gregorios Papoulias. He studied law at the University of Athens and the University of Milan, has a doctorate in private international law from the University of Cologne, and is an associate of the Munich Institute for Southeast Europe. Apart from his native Greek, he also speaks French, German and Italian. A former pole-vault and volley ball champion, Papoulias has been chairman of the National Sports Association since 1985. He is also a founding member and until recently president of the Association for the Greek Linguistic Heritage.

Karolos Papoulias is married to Maria Panou and has three daughters.
Role in PASOK, parliamentary and government offices

Papoulias was a founding member of the Panhellenic Socialist Movement (PASOK) and a close associate of its leader Andreas Papandreou. Since December 1974 he was continually elected to the PASOK Central Committee. He was also member of the Coordination Council, the Executive Bureau and the Political Secretariat, as well as Secretary of the PASOK International Relations Committee from April 1975 to 1985. For a number of years he was also a member of the Coordinating Committee of the Socialist and Progressive Parties of the Mediterranean.

He was first elected to the Greek Parliament in 1977 for Ioannina, and held his seat continuously through the subsequent legislative elections until his 2004 election as President of the Republic. He held several high offices during the PASOK cabinets:

In the administration of Costas Simitis, he was the Chairman of the Standing Committee on Defence and Foreign Affairs of the Hellenic Parliament for a number of years.
Election to the Presidency

On 12 December 2004, Prime Minister Kostas Karamanlis, leader of the governing New Democracy party, and George Papandreou, leader of the PASOK opposition, nominated Papoulias for the position of President, who is chosen by the Parliament. On 8 February 2005, he was elected by an overwhelming parliamentary majority of 279 (out of 300) votes to serve a five-year term. He was sworn in as the 7th President of the Third Hellenic Republic on 12 March 2005, succeeding Konstantinos Stephanopoulos. After securing the support of the two major political parties, he was re-elected to a second and final term on 3 February 2010 with a parliamentary majority of 266 votes.
Papoulias as Foreign Minister

During his long tenure in the Foreign Ministry, he identified himself with a foreign policy that was clearsighted and comprehensive. In the 1980s he played a key role in trying to bring about a solution to the Israeli-Palestinian conflict. This culminated in the successful mediation for the safe departure of the trapped Palestinian militants and Yassir Arafat himself from Lebanon on board Greek vessels in 1983.

He paid particular attention to the creation of sound relations with the Arab world and achieved, among other things, the normalisation of relations between Greece and Egypt and the establishment of the tripartite cooperation of Iran, Armenia and Greece. He held talks with a total of 12 Turkish Foreign Ministers and was firmly committed to the continuous and difficult effort to normalize Greco-Turkish relations. This culminated in the signing of the Papoulias-Y?lmaz memorandum in 1988.

He supported Turkey's European aspirations conditional on their respect for international law and European Union values.

In the period 1993–1996 and particularly at the crucial Essen Summit he played an important role in starting accession talks between the Republic of Cyprus and the European Union.

As president-in-office of the European Union and member of the contact group for the former Yugoslavia, together with Warren Christopher, Klaus Kinkel, Alain Juppé, Andrei Kozyrev and Hans van den Broek, he spared no effort to bring about a resolution of the crisis in Bosnia and Herzegovina. He signed the Interim Agreement with the Republic of Macedonia, aiming at the establishment of better relations between the two countries. He has always kept channels of communication open with all Balkan leaders and has repeatedly mediated on behalf of the EU.

He was very interested in relations between Greece and the Balkan states and it was upon his initiative that the first meeting of the Foreign Ministers of the Balkans was organized in Belgrade in 1988. There, he began talks with Bulgaria and the then Soviet Union on the Burgas-Alexandroupolis oil pipeline.

He was responsible for the signing of the protocol of mutual civil and military assistance with Bulgaria in the 1980s. He restored friendly and neighbourly relations with Albania by ending the state of war between the two countries.

Karolos Papoulias has always been very supportive of any step towards détente, peace and disarmament e.g. the "Initiative of the Six" for peace and disarmament, the participation of Greece in the Conference on Disarmament and Peace in Europe and in the Conference for the Abolition of Chemical Weapons, his proposals to create a nuclear-free zone in the Balkans and the promotion of the idea of making the Mediterranean a sea of peace and cooperation. The JANNINA 1 tripartite cooperation conference, between Greece, Bulgaria and Romania, was his idea and he was a strong supporter of the Black Sea Conference, which he also chaired.

With his visit to Washington in 1985 and the return visit of Secretary of State George Shultz, he made an important contribution to the redefining and improvement of Greek-American relations which had gone through a delicate phase during the previous years.