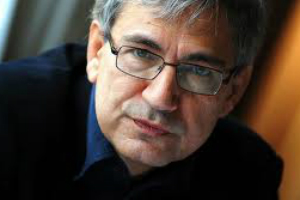 Turkish novelist, whose many awards include the 2006 Novel Prize for Literature. With the translation of his books into several languages, his works have earned international critical acclaim. In 2005 he was inducted into the American Academy of Arts and Letters as an honorary member and won the Prix Medicis for best foreign novel for “Snow,” the book that captured the Nobel.

The child of a civil engineer and a mother whose family’s business was textile manufacturing, Pamuk grew up amidst a large extended family in a wealthy neighborhood of Istanbul. As a young boy, he exhibited artistic talent and aspired to be an artist. Influenced by his family’s emphasis on engineering, he latched onto architecture, a career in which he could utilize his artistic bent. He enrolled in Istanbul Technical University but, inspired by the great works of Woolf, Faulkner, Mann and Proust, he transferred to Istanbul University to pursue a journalism career instead. Immediately after graduation, he realized his need to retreat from the world and write.

Seven years later in 1982, his first novel, “Cevdet Bey and His Sons,” was published and earned kudos. “The Silent House” quickly followed. In 1985 his novel "The White Castle” brought him to the attention of the English-speaking world, and he was invited to be visiting scholar at Columbia University in New York City. Three years later, he returned to Istanbul. With the publication of “My Name is Red” and “Snow” and their subsequent translations, his reputation has been forever etched on the international literary scene.

His style, often mixing reality and fantasy, has been compared to that of Proust, Kafka, Borges, Calvino and García Márquez. Cultural changes and the search for identity are recurring themes as he explores how East and West influence each other, particularly as they collide or meld in his home country. Maureen Freely, translator of “Snow” into English, said “"The rapidity of social change in Turkey has been amazing, and it has also been a source of considerable pain and confusion. Everything Orhan writes speaks to that and to the debates people are having inside themselves but they can't quite put into words."

In late summer 2005, Pamuk was put on trial, charged with “insulting Turkishness.” The accusation came on the heels of remarks he made to a Swiss newspaper that "30,000 Kurds and one million Armenians were killed in these lands, and nobody but me dares talk about it." Pamuk fled Turkey temporarily, but returned to face his accusers. Charges were dropped in January 2006 ostensibly on a technicality but perhaps due to international clamor on his behalf and Turkey’s ongoing debate over possibly joining the European Union.

Pamuk married Aylin Turegen, a historian of Russian descent in 1982. They had one daughter, Rüya, born in 1991, and the marriage ended in divorce in 2001. Pamuk’s father, his father whom he calls a “businessman and failed poet” died in 2003.

The prolific writer once described his rigorous lifestyle. “"Look, I work seven days a week, from 9 in the morning till 8 at night. I have the titles of the next eight novels I want to write. I feel myself pitiable, degraded on a day that I don't write. Turks — who are all born poets, God is whispering in their ear — have a dismissive phrase: he works like a clerk. I have turned this insult around: I am proud to say that I work like a clerk."