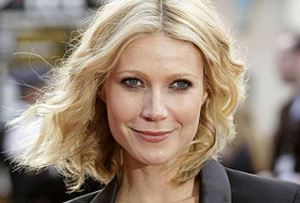 Gwyneth Kate Paltrow (born September 27, 1972) is an Academy Award-winning American actress and singer. She lives in the United Kingdom with her husband, Chris Martin, who is the lead singer of the UK band, Coldplay, and her two children, Apple and Moses.

Paltrow was born to the late film and television director Bruce Paltrow (who was Jewish) and Blythe Danner (who was raised a Quaker and is of Pennsylvania Dutch descent). Her paternal grandparents were Gertrud Goldman and Aaron Paltrow, and her maternal grandparents were Eunice Hogan and John Danner. Raised in Santa Monica, she attended Crossroads School before moving and attending Spence School, a private girls' school in New York City. Later she briefly studied art history at the University of California, Santa Barbara, before discontinuing her degree and committing herself to acting. Paltrow has a younger brother, Jake Paltrow, and is a cousin of actress Katherine Moennig. She is an "adopted daughter" of Talavera de la Reina (Spain), where she lived as an exchange student and learned Spanish. Paltrow was childhood friends with Saturday Night Live's Maya Rudolph. She stated this when she hosted on November 10, 2001. The two sang Flashdance...What a Feeling together during Paltrow's monologue and showed a photo of them in their youth.

Paltrow is a descendent of a famous 17th century Polish rabbi, David HaLevi Segal of Cracow, through the Russian rabbinical family, Paltrowitch, which produced thirty-three rabbis over several generations. The actress has said she is very proud of being Jewish, and has attributed her father's warmth to his Jewish heritage:

"My father had that incredible Jewish warmth, really bolstering us all the time. And when you're nine years old and you're hearing that you are the best person, it gets in there, and you think, 'OK, I'm not going to be afraid to try things, because I'm always loved no matter what.' That kills me, when I think about it. It totally breaks my heart, how lucky I am." Paltrow attended Brown Ledge Summer Camp, an all-girl's camp in Vermont.

Paltrow made her professional stage debut in 1990. Her most recent stage appearance was in Proof at London's Donmar Warehouse.

Her debut film was Shout (1991), and later the same year she played a small role in family friendly Steven Spielberg's Hook (1991). She later starred in Se7en (1995). Her performance in Emma (1996) received much praise, particularly in Europe and Asia.

Two years later, Paltrow starred in a film titled Shakespeare in Love, an imagining of how William Shakespeare might have written Romeo and Juliet. The film received critical acclaim, earned more than $100 million in domestic box office receipts, and received numerous awards. Shakespeare in Love won the Golden Globes for Best Motion Picture-Musical or Comedy and Best Screenplay, as well as the Academy Award for Best Picture. Paltrow also won the award for Outstanding Performance by a Female Actor in a Leading Role from the Screen Actors Guild. Later that year, Paltrow received an Academy Award nomination and won the Oscar® for Best Actress in a Leading Role.

Since then, she has had a relatively low-profile, yet steady, film career with a few critically acclaimed film roles, including Proof (2005) and The Royal Tenenbaums (2001).

Audiences got their first taste of Paltrow's singing ability with the 2000 release of Duets, in which she co-starred with singer Huey Lewis, who played her karaoke-hustling estranged father. Towards the end of the film, their characters resolve their differences and perform a cover version of Smokey Robinson's Cruisin'. The song, which surprised many of Paltrow's fans, was well-received and was eventually released as a single, getting heavy airplay from Top 40 and adult contemporary-formatted radio stations.

In an interview with The Guardian on 27 January 2006, Paltrow admitted that she divided her career into those movies she did for love and those films she did for money. The Royal Tenenbaums, Proof, and Sylvia fell into the former category, whilst View From the Top and Shallow Hal were in the latter.

Since winning the Academy Award for Best Actress for Shakespeare in Love, Paltrow was nominated for a Golden Globe for Best Actress in a Drama for her role in PROOF opposite Anthony Hopkins and Jake Gyllenhaal.