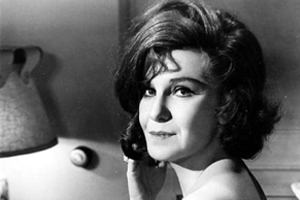 American actress noted for her theater roles in Tennessee Williams' plays. Page preferred the stage to film roles and considered by many to be one of the finest dramatic actresses of the American Theater. With eight nominations for Best Actress, including her work in such films as "Summer and Smoke" and "Sweet Bird of Youth," she finally took home the Oscar for Best Actress on 3/25/1986 for her superlative performance in "The Trip To Bountiful." She earned two Emmy awards for "A Christmas Memory," 1966 and "The Thanksgiving Visitor" in 1967. The actress called "Gerry" by her friends was appearing on Broadway with the revival of Noel Coward's "Blithe Spirit" when she died in 1987.

Page lived with her osteopath father and homemaker mother in Kirksville, Missouri. The family moved to Chicago when she was five years old. She gave up her dream of music because her parents could not afford a piano and lessons during the Great Depression. While performing in a Sunday school play, she was bitten by the acting bug and was appearing on-stage by the time she was 17. She enrolled at the Goodman School of Drama in Chicago and graduated in 1945. Between the years of 1945 to 1949, Page spent her winters looking for work in New York and working in summer stock in the Midwest. In New York City, the 5' 8" actress worked as a hat-check girl and lingerie model to pay her rent. By 1949, Page moved permanently to New York City and enrolled in the Actors Studio.

Page was cast in the off-Broadway revival of Tennessee Williams' "Summer and Smoke" in 1952 and garnered attention and excellent notices from New York theater critics. A Hollywood talent scout encouraged the actress to make a screen test and soon she played opposite John Wayne in "Hondo," 1953. Page turned down a career in Hollywood even though the money was tempting. She preferred to concentrate on roles in the theater. Her unassuming demeanor and sparrow soft voice captivated audiences in "Sweet Bird of Youth" with Paul Newman in 1959. She reprised the role in the film adaptation of the play in 1962. She received Oscar nominations in "You're A Big Boy Now," 1967, "Pete 'n' Tillie," 1972, Woody Allen's "Interiors," 1978 and "The Pope of Greenwich Village" in 1984. Page enjoyed sharing her gift and talent for acting with young students charging $ 5.00 for a three-hour class in 1987.

Page met her third husband, actor Rip Torn at the Actors Studio in 1955. He asked her for a lick of her ice cream and she finally acquiesced. The acting couple married in 1963 and had three children, daughter Angelica in 1964 and twins Jonathan and Anthony in 1965. Torn preferred to cook the family meals while Page enjoyed weeding their townhouse garden with patience and persistence. She resisted making trouble for Torn when he fathered another daughter by another actress, not seeing the situation as a threat to her marriage. The couple preferred staying home together to parties that seemed to result to volatile and maddening fights at the end of an evening. Their clashes would result in Torn's angry tempers and Page remaining silent. She remained a stranger to glamour, preferring to appear in public dressed as a bag lady. She joked how Hollywood tried to make her into a glamour queen and how she fought the studio's image. She wore a skirt bought at a Kansas thrift shop and blouse from an Indian shop on Broadway when she won her 1987 Oscar.

In January 1986, after 18 months of traveling and working, Page collapsed and spent two weeks at a New York Hospital for high blood pressure. She remained in fragile health but preferred to spend her time working than resting at home. Her son Tony found her body in her Manhattan brownstone after he was notified that she had not arrived to the matinee performance of "Blithe Spirit." She died of a heart attack on 6/13/1987 and her memorial service was held on 6/17/1987. Fellow actors James Earl Jones, Sissy Spacek, and Ann Jackson gave eulogies extolling her influence on their work.