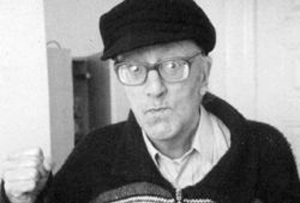 Luiz Pacheco (Lisbon, May 7, 1925 - Montijo, January 5, 2008) was a writer, publisher, polemicist and literary critic (mainly Portuguese literature). He was most proud of his work as a publisher.

Life
He was born in an old house in Rua da Estefânia on the São Sebastião da Pedreira district. His father was public officer and amateur musician. An only child of a middle class family with roots to Alentejo, Luiz Pacheco soon read all the books of his family considerable size library. He was, since young age, asthmatic and short-sighted, and later in his live it became impossible for him to read, something cruel to anyone, but particularly to a person that needed to read to be sane. He was arrested twice wile a minor for romantic involvements with young girls. He compulsively married one of these girls who became pregnant when he was 18-years-old. She was 15-years-old. After a year, he turned to her younger sister. The three of them lived together during a spell, with all his children. He then wrote A Comunidade (The Community), his centrepiece; it portrays that period. His women were always his intellectual inferiors, the first two were peasants. He loved to teach them to read. He had eight children from three different wives.

He studied in Camões high school, being the best student of his year, and latter enrolled in the Faculdade de Letras of the University of Lisbon, dropping out due to financial stresses. Mário Soares, Urbano Tavares Rodrigues e Artur Ramos were his classmates. He used to say his high school grade was 18 (out of 20), while Urbano Tavares Rodrigues’ was 12. Urbano, a somewhat popular Portuguese writer, was one of Pacheco’s ‘favourite enemies’. After dropping out, Pacheco decided to be an autodidact, and he did managed it. He was a compulsive reader and always had an analytic point of view, as we could see from some of his books, always underlined and with his own comments.

In 1946 got a job at the Inspecção Geral de Espectáculos as a fiscal for theatre plays, music shows and cinema. Some people say he was a censor, but nothing could be farther from the truth! In fact, being as he was, he saw this as an opportunity to see plays and films for free. Never was a play or a film prohibited or altered due to his action. This was perhaps a way of antagonize a dictatorship that he always condemned with all his strengths. But he then decided that he couldn’t take it and left. Since then he never had a proper job. He wrote articles for newspapersand magazines, including O Globo, Bloco, Afinidades, O Volante, Diário Ilustrado, Diário Popular and Seara Nova, he made translations, and was an excellent proof reader. A libertine, ever poor, he lived of his friends' goodwill; he classified them by the amount of money he could borrow each time. He sold books and pamphlets from Contraponto to survive. When he had money to spend he was extremely generous to his friends and people in need.

During years of financial instability, he lived in many houses, rented rooms, pensions, all over the country, and many important documents were lost by this constant moving. Charismatic places for Pacheco, where he wrote many of his works were Caldas da Raínha and Setúbal, but, as he once said, being outside Lisbon blurred his sight and critical sense. He never had an affiliation to any political party, although in his late years he publicly asked the Portuguese Communist Party to accept him, because he wanted to be warm when he died, and what better than the Party’s flag! This irreverent posture, always laughing at stupidity, made his live a living hell. But he couldn’t live it any other way. A dedicated literary and cultural critic, he became famous (and feared) for its critical sarcastic, irreverent texts. He denounced intellectual dishonesty and the censorship imposed by the Salazar regimen.

High , thin and bony, bald, using eyeglasses with thick lenses, dressing used clothes (for ragged times and below of its size), hypersensitive to alcohol (he liked red wine and beer), hypochondriac, always previewing his own death (due to asthma and to a weak heart), cynical but honest, paradoxical, he is a worthy heir of Luís de Camões, Bocage, Gomes Leal ou Fernando Pessoa.

writings
Luiz Pacheco published many of his writings in Contraponto, mainly short stories and critical texts concerning Portuguese literature. He wrote thousands of letters to friends with enormous literary value and many of them were published in different books. ‘Comunidade’, ‘O Libertino passeia por Braga, a idolátrica, o seu esplendor’ and ‘Teodolito’ are his most acclaimed books. ‘ Pacheco versus Cesariny’ is an 'epistolary novel' of the surrealist movement in Portugal. His frontal way of analysing a work was feared by many. Fernando Namora, a known Portuguese writer, is an example of this: Luiz Pacheco heard something about some coincidences in two books by Fernando Namora and Virgilio Ferreira. Decided to decipher the mystery, he bought every edition of the two books he could lay his hands on and compared, to find out if these where coincidences and, if not, who copied who. The result was published by the name of 'O Caso do Sonâmbulo Chupista'. Most of his books are currently not available in book stores. Here is an incomplete list of his published works.

Dictionnaire Philosophique translation
Circa 1965, Luiz Pacheco's friend Bruno da Ponte asked him for help translating volume one of Voltaire's Dictionnaire Philosophique. Even though Pacheco was paid in advance for the job, he missed the deadline without completing any of the work assigned to him. After much pressure from Bruno da Ponte, he began typing away his translation as he read from the book, but not having a dictionary at hand, he decided to temporarily replace every word he didn't know with a vulgarism in red ink. Unfortunately, he forgot about it and the draft was rushed to print without being proofed by either translator or the editor. The printers obediently set every word given to them and, as was common practice, used italics for those words typed in red. Pacheco eventually realised he had forgotten to take out the vulgarisms and raced to the printers in time to halt production of the book. However, his revisions weren't thorough enough, and the first edition of the book still came out with a footnote on page 273 bearing reference to "delicious shit sandwiches".

Death
On 5 January 2008, Pacheco died in Montijo. The Portuguese television channel RTP 2 broadcast a biographical documentary about his life, filmed in his last years, where Nobel laureate in Literature José Saramago, former Portuguese statesman Mário Soares, and Luiz Pacheco himself, among other figures, commented the writer's eccentric life and work.