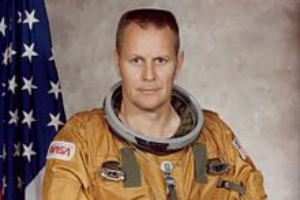 Robert Franklyn Overmyer (July 14, 1936 – March 22, 1996) was an American test pilot, Colonel in the United States Marine Corps and NASA astronaut. He was born in Lorain, Ohio, but considered Westlake, Ohio his hometown. Overmyer was selected by the United States Air Force as an astronaut for its Manned Orbiting Laboratory in 1966. Upon cancellation of this program in 1969, he became a NASA astronaut and served support crew duties for the Skylab program and Apollo-Soyuz Test Project. In 1976, he was assigned to the Space Shuttle program, and flew as Pilot on one 1982 mission and as Commander on a second in 1985. He was selected as a lead investigator into the Space Shuttle Challenger disaster, and retired from NASA in 1986.

Overmyer entered active duty with the Marine Corps in January 1958. After completing Navy flight training in Kingsville, Texas, he was assigned to VMA-214 in November 1959. Overmyer was assigned to the Naval Postgraduate School in 1962 to study aeronautical engineering. Upon completion of his graduate studies, he served one year with Marine Maintenance Squadron 17 at MCAS Iwakuni, Japan. He was then assigned to the U.S. Air Force Test Pilot School at Edwards Air Force Base, California. Colonel Overmyer was chosen as an astronaut for the Manned Orbiting Laboratory (MOL) Program in 1966. Colonel Overmyer logged over 7,500 flight hours, with over 6,000 in jet aircraft.

The MOL program was canceled in 1969, and soon afterward Overmyer was selected as a NASA astronaut. His first assignment with NASA was engineering development duties on the Skylab Program from 1969 to 1971. From 1971 to 1972, he was a support crew member for Apollo 17 and was the launch capsule communicator. From 1973 to 1975, he was a support crew member for the Apollo-Soyuz Test Project and was the NASA capsule communicator (CAPCOM) in the mission control center in Moscow. In 1976, he was assigned duties on the Space Shuttle Approach and Landing Tests (ALT) Program and was the prime T-38 Talon chase pilot for Orbiter Free-Flights 1 and 3. In 1979 Colonel Overmyer was assigned as the Deputy Vehicle Manager of OV-102 (Columbia) in charge of finishing the manufacturing and tiling of Columbia at the Kennedy Space Center preparing it for its first flight. This assignment lasted until Columbia was transported to the launch pad in 1980.

Colonel Overmyer was the pilot for STS-5, the first fully operational flight of the Shuttle Transportation System, which launched from Kennedy Space Center, Florida, on November 11, 1982. He was accompanied by spacecraft commander Vance D. Brand and two mission specialists, Dr. Joseph P. Allen and Dr. William B. Lenoir. STS-5, the first mission with a four-man crew, clearly demonstrated the Space Shuttle as fully operational by the successful first deployment of two commercial communications satellites from the Orbiter’s payload bay. The mission marked the first use of the Payload Assist Module (PAM-D), and its new ejection system. Numerous flight tests were performed throughout the mission to document Shuttle performance during launch, boost, orbit, atmospheric entry and landing phases. STS-5 was the last flight to carry the Development Flight Instrumentation (DFI) package to support flight testing. A Getaway Special, three Student Involvement Projects and medical experiments were included on the mission. The STS-5 crew successfully concluded the 5-day orbital flight of Columbia with the first entry and landing through a cloud deck to a hard-surface runway and demonstrated maximum braking. Mission duration was 122 hours before landing on a concrete runway at Edwards Air Force Base, California, on November 16, 1982.

Colonel Overmyer was the commander of STS-51-B, the Spacelab-3 (SL-3) mission. He commanded a crew of four astronauts and two payload specialists conducting a broad range of scientific experiments from space physics to the suitability of animal holding facilities. Mission 51-B was also the first Shuttle flight to launch a small payload from the "Getaway Special" canisters. Mission 51-B launched at 12:02 p.m. EDT on April 29, 1985 from Kennedy Space Center, Florida, and landed at Edwards Air Force Base, California, at 9:11 a.m. PDT on May 6, 1985. Mission 51-B completed 110 orbits of the earth at an altitude of 190 n.m.

Colonel Overmyer retired from NASA and the Marine Corps in May 1986. Also in 1986, Overmyer was one of NASA's lead investigators into the Challenger Disaster.

Overmyer died on March 22, 1996, in Duluth, Minnesota, in the crash of a Cirrus VK-30, a light aircraft he was testing. He was survived by his wife, Katherine, and three children.