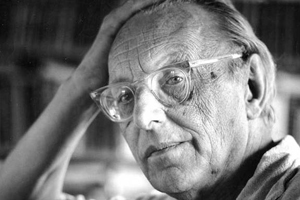 Orff was born in Munich, Germany and came from a Bavarian family that was very active in the German military. His father's regimental band supposedly had often played the compositions of young Orff.

Moser's Musik Lexicon states that Orff studied at the Munich Academy of Music until 1914. He then served in the military during World War I. Afterwards, he held various positions at opera houses in Mannheim and Darmstadt, later to return to Munich to pursue further his music studies.

As of 1925, and for the rest of his life, Orff was the head of a department and co-founder of the Guenther School for gymnastics, music, and dance in Munich, where he worked with musical beginners. Having constant contact with children, this is where he developed his theories in music education.

While Orff's association, or lack thereof, with the Nazi party has never been conclusively established, his Carmina Burana was hugely popular in Nazi Germany after its premiere in Frankfurt in 1937, receiving numerous performances (although one Nazi critic reviewed it savagely as "degenerate" — entartet — implying a connection with the contemporaneous, and infamous, exhibit of Entartete Kunst). It should be noted that he was one of the few German composers under the Nazi regime who responded to the official call to write new music for A Midsummer Night's Dream after the music of Felix Mendelssohn had been banned — others refused to cooperate in this. But then again, Orff had already composed music for this play as early as 1917 and 1927, long before this was a favour for the Nazi government.

Orff was a personal friend of Kurt Huber, one of the founders of the resistance movement Die Weiße Rose (the White Rose), who was condemned to death by the Volksgerichtshof and executed by the Nazis in 1943. After World War II, Orff claimed that he was a member of the group, and was himself involved in the resistance, but there was no evidence for this other than his own word, and other sources dispute his claim. A motive would seem to be clear: Orff's claim was accepted by the American de-nazification authorities, who changed his previous category of gray unacceptable to gray acceptable, enabling him to continue composing.

Orff is buried in the Baroque church of the beer-brewing Benedictine priory of Andechs, south of Munich.

Orff is most known for Carmina Burana (1937), a "scenic cantata". It is the first of a trilogy that also includes Catulli Carmina and Trionfo di Afrodite. Carmina Burana reflected his interest in medieval German poetry. Together the trilogy is called Trionfi, or "triumphs". The composer described it as the celebration of the triumph of the human spirit through sexual and holistic balance. The work was based on thirteenth-century poetry found in a manuscript dubbed the Codex latinus monacensis found in a Bavarian monastery in 1803 and written by the Goliards; this collection is also known as Carmina Burana. While "modern" in some of his compositional techniques, Orff was able to capture the spirit of the medieval period in this trilogy, with infectious rhythms and easy tonalities. The medieval poems, written in an early form of German and Latin, are often racy, but without descending into smut.

With the success of Carmina Burana, Orff orphaned all of his previous works except for Catulli Carmina and the Entrata, which were rewritten until acceptable by Orff. As an historical aside, Carmina Burana is probably the most famous piece of music composed and premiered in Nazi Germany. Carmina Burana was in fact so popular that Orff received a commission in Frankfurt to compose music for A Midsummer Night's Dream, which was supposed to replace the banned music by Mendelssohn. After the war, he claimed not to be satisfied with the music and reworked it into the final version that was first performed in 1964.

Orff was reluctant to term any of his works simply operas in the traditional sense. His works Der Mond ("The Moon") (1939) and Die Kluge ("The Wise Woman") (1943), for example, he referred to as "Märchenoper" ("fairytale operas"). Both compositions feature the same "timeless" sound in that they do not employ any of the musical techniques of the period in which they were composed, with the intent that they be difficult to define as belonging to a particular era. Their melodies, rhythms and, with them, text appear in a union of words and music.

About his Antigone (1949), Orff said specifically that it was not an opera, rather a Vertonung, a "musical setting" of the ancient tragedy. The text is an excellent German translation, by Friedrich Hölderlin, of the Sophocles play of the same name. The orchestration relies heavily on the percussion section, and is otherwise fairly simple. It has been labelled by some as minimalistic, which is most adequate in terms of the melodic line. The story of Antigone has a haunting similarity to the history of Sophie Scholl, heroine of the White Rose, and Orff may have been memorializing her in his opera.

Orff's last work, De Temporum Fine Comoedia ("A Play of the End of Time"), had its premiere at the Salzburg music festival on August 20, 1973, performed by Herbert von Karajan and the Cologne Radio Symphony Orchestra and Chorus. In this highly personal work, Orff presented a mystery play, in which he summarized his view on the end of time, sung in Greek, German, and Latin.

Musica Poetica, which Orff composed with Gunild Keetman, was used as the theme music for Terrence Malick's 1973 film Badlands. Hans Zimmer later reworked this music for his 1993 True Romance score.

In pedagogical circles he is probably best remembered for his Schulwerk (1930-35), translated into English as Music for Children. Its simple musical instrumentation allowed even untutored child musicians to perform the piece with relative ease. Much of his life Orff worked with children, using music as an educational tool — both melody and rhythm are often determined by the words.

Orff's ideas were developed, together with Gunild Keetman, into a very innovative approach to music education for children, known as the Orff Schulwerk. The term Schulwerk is German for "school work". The music is elemental and combines movement, singing, playing and improvisation.