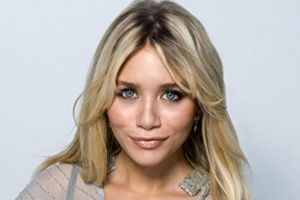 Ashley and Mary-Kate were born in Sherman Oaks, California to David Olsen and Jarnette "Jarnie" Jones. The twins have Norwegian ancestry. Ashley is two minutes older than Mary-Kate. They have an older brother, Trent Olsen, a little sister, Elizabeth Olsen who is also an actress, and younger half siblings Taylor and Jake from their father's second marriage. Mary-Kate and Ashley's parents divorced in 1995.

Olsen began her career at the age of nine months old, when she and Mary-Kate were hired to share the role of Michelle Tanner on the popular television series Full House in 1987. Following the end of Full House, Olsen released a string of successful straight-to-video movies and became a popular figure in the preteen market during the late '90s and early 2000s. She became a household name, with her likeness seen in clothes, books, fragrances, magazines, movies, and posters, among others. There were fashion dolls of her made by Mattel from 2000-2005. She starred in the video series The Adventures of Mary-Kate & Ashley, the ABC show Two of a Kind, and ABC Family's So Little Time. She and her sister were jointly ranked number three on the VH1 program 100 Greatest Child Stars. In 2004, Ashley appeared alongside Mary-Kate in the theatrical light-hearted romantic comedy, New York Minute, also starring Eugene Levy. "New York Minute" was Ashley's final acting project because she didn't feel connected to acting anymore. In 2007 when Mary-Kate and Ashley were 21 they said that if they got involved in movies together again it would be as producers. When asked about acting again in 2009 Ashley said, "Never say never." In 2009 Ashley contemplated returning to acting. She changed her mind and in 2012 the sisters decided to quit acting permanently and focus on fashion.

In 2004, both Ashley and Mary-Kate became co-presidents of their company Dualstar (created in 1993 following the success of Full House), the brand currently selling in over 3,000 stores in America and 5,300 stores worldwide. Their success has been marked on Forbes The Celebrity 100 list since 2002. In 2007, Forbes ranked the twins as the eleventh-richest women in entertainment, with an estimated combined net worth of $300 million.

Following a high volume of public interest in their fashion choices, both work in collaboration on a string of fashion lines available to the public. They started a clothing line in Wal-Mart stores across America for girls ages 4–14 as well as a beauty line called "Mary-Kate and Ashley: Real fashion for real girls". In 2004 they made news by signing a pledge to allow all the workers that sew their line of clothing in Bangladesh full maternity leave. The National Labor Committee, which organized the pledge, later praised the twins for their commitment to worker rights. In 2006, in an attempt to gain credibility in the fashion industry after their association with Wal-Mart tarnished their reputations, they were tapped as the faces of the upscale fashion line Badgley Mischka. As adults, Ashley and Mary-Kate have devoted much of their attention to the world of fashion. They head a couture fashion label, "The Row," as well as the "Elizabeth and James", "Olsenboye", and "StyleMint" retail collections. Ashley's sometimes controversial fashion choices have often found her on both the best and worst dressed fashion lists, particularly for her decision to wear fur. Mary-Kate and Ashley designed an Olsenboye Change Purse in 2011 and donated the money to "Pennies From Heaven". In 2011 Mary-Kate and Ashley teamed up with TOMS Shoes to design footwear for kids without shoes in more than 20 countries worldwide. Mary-Kate and Ashley are now the creative directors for Superga (brand). Mary-Kate and Ashley will release an Elizabeth and James perfume in Spring 2013. The girls won the top prize at the 2012 CFDA Fashion Awards. StyleMint is now available in the UK. In October 2012 Mary-Kate and Ashley won the WSJ Magazine Innovator of The Year Award.

In 2008, Mary-Kate and Ashley wrote Influence, a book featuring interviews with fashion designers that have inspired the girls' fashion lines.

In 2004 Ashley graduated from Campbell Hall School. She attended New York University for a period of time with her sister, Mary Kate. In 2009, Olsen filed a $40 million lawsuit against tabloid magazine National Enquirer for depicting her as being involved in a drug scandal.