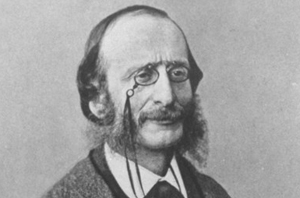 Jacques Offenbach (20 June 1819 – 5 October 1880) was a French composer and cellist of the Romantic era with German-Jewish descent and one of the originators of the operetta form. He was one of the most influential composers of popular music in Europe in the 19th century, and many of his works remain in the repertory.

While his name remains most closely associated with the French operetta and the Second Empire, it is his one fully operatic masterpiece, Les contes d'Hoffmann (The Tales of Hoffmann), that has become the most frequently performed of Offenbach's works.

Offenbach's father, born Isaac Eberst in Offenbach am Main around 1780, changed his name to Offenbach when he settled down in Deutz in 1802. He was a man of many talents who worked as a bookbinder, translator, publisher, music teacher and composer and became a cantor some 30 years later. In 1816 the family moved to Cologne, where his son Jacob was born in 1819.

In 1833 his father took Jacob to Paris and managed to get him admitted as a cello student to the Paris Conservatoire. Financial difficulties forced Jacques, as he was known by then, to break off his studies at the end of 1834. After a few odd jobs he eventually found a position as a cellist in the orchestra of the Opéra Comique. He soon made a name for himself as a cello virtuoso, appearing with famous pianists like the young Anton Rubinstein, Liszt, Mendelssohn, and, very often, with Flotow with whom he performed jointly composed pieces. In 1844, he converted to Catholicism and married Herminie d'Alcain. He moved to Germany with his wife and daughter in 1848 (the couple eventually had four daughters) to escape revolutionary violence in France, but returned after a brief stay.

In 1850, he became conductor of the Théâtre Français, but the musical theatre establishment in Paris did not immediately accept his sometimes pointed songs and music. Therefore, in 1855, he rented for the Expo season a little theatre on the Champs-Élysées and named it the Bouffes Parisiens. In the following winter he moved the Bouffes to a larger and, above all, heatable theatre on rue Monsigny/Passage Choiseul. There he began a successful career devoted largely to composing operettas. In the early years, Offenbach's permit limited his productions to one-act works with only a few speaking or singing characters. Les deux aveugles, Ba-ta-clan (both premiering in 1855), and La bonne d'enfant were three of his popular works from this period. Only in 1858, after these restrictions had been lifted, it became possible for him to produce his first full-length work, Orpheus in the Underworld.

Offenbach wrote almost 100 operettas, some of which were wildly popular in his time, and his most popular works are still performed regularly today. The best of these works combined hilarious political and cultural satire with witty grand opera parodies. His best-known operettas in the English-speaking world are Orpheus in the Underworld (1858), La belle Hélène (1864), La vie parisienne (1866), The Grand Duchess of Gerolstein (1867), and La Périchole (1868). Les Brigands (1869) was very popular in the English-speaking world initially but was later forgotten.

Offenbach worked with the librettists Meilhac and Halévy more often than any other librettist or team and produced some of his most successful works with them. He said of his relationship with the team: Je suis sans doute le Père, chacun des deux autres est à la fois mon Fils et Plein d'Esprit (literally "No doubt I am the Father; each of the two others is at once my Son and Full of Verve"— esprit meaning both Spirit and wit and Plein d'Esprit rhyming with Saint Esprit).

Offenbach was much attached to his adopted country, and many of his works are very patriotic in nature. That didn't help him much when war broke out between France and Germany in 1870. Reviled in the German press as a traitor to the German fatherland, and attacked in the French press as an agent of Bismarck, he had to bring his family to safety in Spain. When he returned to Paris after the war, his irreverent operettas were out of favor with the public. It was felt that by "turning royalty into a farce and the army into a joke" they had undermined Napoleon III and were therefore the cause, or at least one of the causes, of the defeat and the end of his reign. It is not without irony, some reviewers note, that only a few years later Offenbach was blamed (and harassed by the police) for his loyalty to the deposed emperor. 1875 marked a low point. Offenbach was forced into bankruptcy. In 1876, though, a very successful tour of the United States at the occasion of the U.S. Centennial Exhibition allowed him to recover part of his losses. While there, he conducted two of his operettas, La vie parisienne and La jolie parfumeuse, and also gave as many as 40 concerts in New York and Philadelphia.

Offenbach enjoyed renewed popularity with Madame Favart (1878), which built a fantasy plot around the real-life French actress Marie Justine Favart, and La fille du tambour-major, a musically inventive piece. Most experts are of the opinion that his last work, The Tales of Hoffmann, was his only grand opera. It is more serious and more ambitious in its musical scope than his other works, perhaps reflecting the eternal wish of the humourist to be taken seriously. The opera was still unfinished at his death in 1880, but was completed by his friend Ernest Guiraud and premiered in 1881.

Offenbach is buried in the Cimetière de Montmartre, Paris, France.