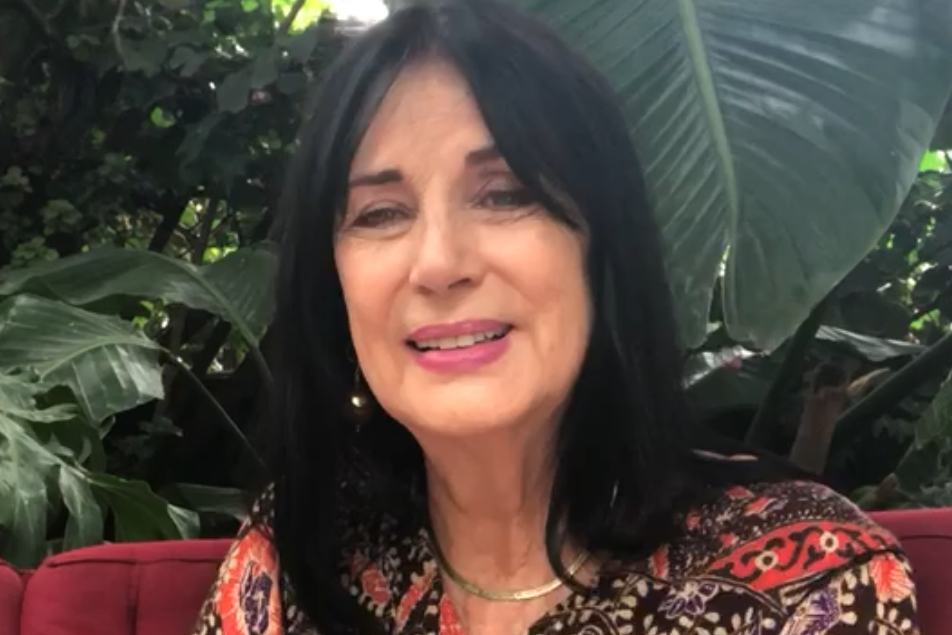 Merle Oberon (19 February 1911 – 23 November 1979) was an Anglo-Indian actress. She began her film career in British films as Anne Boleyn in The Private Life of Henry VIII (1933). After her success in The Scarlet Pimpernel (1934), she travelled to the United States to make films for Samuel Goldwyn. She was nominated for an Academy Award for Best Actress for her performance in The Dark Angel (1935). A traffic collision in 1937 caused facial injuries that could have ended her career, but she soon followed this with her most renowned performance in Wuthering Heights (1939).

Estelle Merle Thompson was born in Bombay, British India on 19 February 1911. According to some sources, her birth name was Estelle Merle O'Brien Thompson. Merle was given "Queenie" as a nickname, in honour of Queen Mary, who visited India along with King George V in 1911.

Over the years, Oberon obscured her parentage. Some sources claim Merle's parents as Arthur Terrence O'Brien Thompson, a British mechanical engineer from Darlington, who worked in Indian Railways, and Charlotte Selby, a Eurasian from Ceylon with partial Māori heritage. At fourteen, Charlotte had given birth to her first child Constance, in Ceylon, from a relationship with Henry Alfred Selby, an Irish foreman of a tea planter. Some sources claim that Constance, twelve at the time of Merle's birth, was Merle's biological mother, although Charlotte raised Merle as her own child. Charlotte's partner, Arthur Thompson, was listed as her father in Merle's birth certificate, with the forename misspelled as "Arther". Merle reportedly knew Constance as her "sister". Constance had four other children, Edna, Douglas, Harry and Stanislaus (Stan) with her husband Alexander Soares. Edna and Douglas moved at an early age to the UK and Harry later in life moved to Toronto, Canada and retained Constance's maiden name, Selby. Stanislaus was the only child to keep his father's last name of Soares and he currently resides in Surrey, British Columbia, Canada. All the siblings reportedly believed that Merle was their aunt (their mother Constance's sister), when in fact she was their sister, and Constance was her real mother.

When Harry Selby tracked down Merle's birth certificate in Indian government records in Bombay (Mumbai), he was surprised to discover he was in fact her brother. He attempted to visit her in Los Angeles, but she refused to see him. He withheld this information from Oberon's biographer Charles Higham, only revealing it to Maree Delofski, the maker of The Trouble with Merle, a 2002 documentary produced by the Australian Broadcasting Corporation, which investigated the conflicting versions of her origin.

In 1914, Arthur Thompson joined the British Army and later died of pneumonia on the Western Front during the Battle of the Somme. Merle, with her "mother" (really her grandmother), led an impoverished existence in shabby Bombay flats for a few years. Then, in 1917, they moved to better circumstances in Calcutta. Oberon received a foundation scholarship to attend La Martiniere Calcutta for Girls, one of the best private schools in Calcutta. There, she was constantly taunted for her unconventional parentage and eventually quit school and had her lessons at home.

Oberon first performed with the Calcutta Amateur Dramatic Society. She was also completely enamored of the films and enjoyed going out to nightclubs. Indian journalist Sunanda K. Datta-Ray claimed that Merle worked as a telephone operator in Calcutta under the name Queenie Thomson, and won a contest at Firpo's Restaurant there, before her film career started.

In 1929, she met a former actor named Colonel Ben Finney at Firpo's, and dated him. However, when he saw Oberon's dark-skinned mother one night at her flat and realised Oberon was mixed-race, he decided to end the relationship. But he promised to introduce her to Rex Ingram of Victorine Studios, if she could come to France. Oberon jumped at the offer and decided to follow the man to the studios in France. After packing all their belongings and moving to France, Oberon and her mother found that their supposed benefactor had dodged them. He had left a good word for Oberon with Ingram at the studios in Nice. Ingram liked Oberon's exotic appearance and quickly hired her to be an extra in a party scene in a film named The Three Passions.

Oberon arrived in England for the first time in 1928, aged 17. Initially she worked as a club hostess under the name Queenie O'Brien and played in minor and unbilled roles in various films. "I couldn't dance or sing or write or paint. The only possible opening seemed to be in some line in which I could use my face. This was, in fact, no better than a hundred other faces, but it did possess a fortunately photogenic quality," she modestly told a journalist at Film Weekly in 1939. In view of the information discovered since this 1939 article (see preceding section) this should be seen as part of a myth perpetrated by Miss Oberon, since apparently she did not reach Europe until 1929.

Her film career received a major boost when the director Alexander Korda took an interest and gave her a small but prominent role, under the name Merle Oberon, as Anne Boleyn in The Private Life of Henry VIII (1933) opposite Charles Laughton. The film became a major success and she was then given leading roles, such as Lady Blakeney in The Scarlet Pimpernel (1934) with Leslie Howard, who became her lover for a while.

Oberon's career went on to greater heights, partly as a result of her relationship with and later marriage to Alexander Korda, who had persuaded her to take the name under which she became famous. He sold "shares" of her contract to producer Samuel Goldwyn, who gave her good vehicles in Hollywood. Her "mother" stayed behind in England. Oberon earned her sole Academy Award for Best Actress nomination for The Dark Angel (1935) produced by Goldwyn. Around this time she had a serious romance with David Niven, and according to his authorized biography, even wanted to marry him, but he wasn't faithful to her.

She was selected to star in Korda's film I, Claudius (1937) as Messalina, but a serious car accident resulted in filming being abandoned. Oberon was scarred for life, but skilled lighting technicians were able to hide her injuries from cinema audiences. She went on to appear as Cathy in her most famous film, Wuthering Heights (opposite Laurence Olivier; 1939), as George Sand in A Song to Remember (1945) and as the Empress Josephine in Désirée (1954).

According to Princess Merle, the biography written by Charles Higham with Roy Moseley, Oberon suffered even further damage to her complexion in 1940 from a combination of cosmetic poisoning and an allergic reaction to sulfa drugs. Alexander Korda sent her to a skin specialist in New York City, where she underwent several dermabrasion procedures. The results, however, were only partially successful; without makeup, one could see noticeable pitting and indentation of her skin.

Charlotte died in 1937. In 1949 Oberon commissioned paintings of her mother from an old photograph. The paintings hung in all her homes until Oberon's own death in 1979.

Merle Oberon had a brief affair in 1941 with Richard Hillary, an RAF fighter pilot who had been badly burned in the Battle of Britain. They met while he was on a good-will tour of the United States. He later became well known as the author of a best-selling book, The Last Enemy.

Merle Oberon became Lady Korda upon her husband's knighthood in 1942, when the couple were based at Hills House in Denham, England. She divorced him in 1945, to marry cinematographer Lucien Ballard. Ballard devised a special camera light for her to eliminate her facial scars on film. The light became known as the "Obie".

She married twice more, to Italian-born industrialist, Bruno Pagliai (with whom she adopted two children; they lived in Cuernavaca, Morelos, Mexico) and Dutch actor Robert Wolders – later companion to actresses Audrey Hepburn and Leslie Caron – before her retirement in Malibu, California, where she died, aged 68, after suffering a stroke. She was interred at Forest Lawn Memorial Park Cemetery in Glendale, California.

Merle Oberon has a star on the Hollywood Walk of Fame (at 6250 Hollywood Boulevard) for her contributions to Motion Pictures.

Michael Korda, nephew of Alexander Korda, wrote a roman à clef about Oberon after her death entitled Queenie. This was also turned into a television miniseries starring Mia Sara.

Oberon claimed that she was born and raised in Tasmania, Australia. The fact that no birth or school records could be found to prove this was explained by another fabrication: all records had been destroyed in a fire. She maintained these fictions throughout her professional life. The story of her alleged Tasmanian connections was comprehensively debunked after her death.

Oberon is known to have been to Australia only twice. Her first visit was in 1965, on a film promotion. Although a visit to Hobart was scheduled, she became ill after journalists in Sydney pressed her for details of her early life, and she left for Mexico shortly afterwards. In 1978, the year before her death, she agreed to visit Hobart for a Lord Mayoral reception. The Lord Mayor of Hobart became aware shortly before the reception that there was no proof she had been born in Tasmania, but went ahead with the reception to save face. However, shortly after arriving at the reception, Oberon denied she had been born in Tasmania, to the disappointment of many. She then excused herself, claiming illness; whether ill or not, this meant she was unavailable to answer any more questions about her background. On the way to the reception, she had told her driver that as a child she was on a ship with her father, who became ill when it was passing Hobart. They were taken ashore so he could be treated, and as a result she spent some of her early years on the island. This story, too, seems to have been a fabrication. During her Hobart stay, she remained in her hotel, gave no other interviews, and did not visit the theatre named in her honour.

Even so, there are still many people in Tasmania who claim to have known Oberon as a child. They insist she was the illegitimate daughter of a woman named Lottie Chintock from St. Helens.

Other versions of Merle Oberon's story include:

In Hobart in 1978, she pointed to a fine old building and told her husband Robert Wolders she had been born and raised there. The building was in fact Government House, the official residence of the Governors of Tasmania.

She left Tasmania for India after her distinguished father died in a hunting accident, and was raised there by aristocratic godparents.

Lottie Chintock had been seduced by the owner of the St Helens Hotel, John Wills Thompson.

Lottie Chintock gave birth to her in Hobart but was forced to relinquish her.

In Hobart, Lottie lived with an Indian silk merchant with the unlikely name of O'Brien. The O'Briens adopted the baby and took her to India, where she grew up.

She was taken to India by a travelling troupe of actors called O'Brien.

She was taken to India by the cousin of her mother's employer.

It is claimed that she attended the Model School in Hobart, but that school has no record of her.