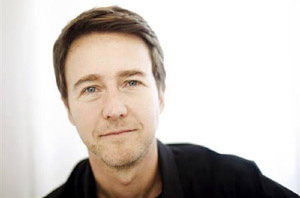 Edward Harrison Norton (born August 18, 1969) is an American actor, screenwriter, film director and producer. In 1996, in his début film, his supporting role in the courtroom drama Primal Fear garnered him a nomination for the Academy Award for Best Supporting Actor. Two years later, his lead role as a reformed white power skinhead in American History X earned a nomination for Academy Award for Best Actor.

His other performances are diverse in range and include supporting roles in the biographical drama The People vs. Larry Flynt (1996) and the comedy Everyone Says I Love You (1998), starring roles in the cult hit Fight Club (1999), 25th Hour (2002), The Illusionist (2006) and Leaves of Grass (2009) (in which he acted against himself), a rare villain turn in The Italian Job (2003) and an unrecognizable appearance in Kingdom of Heaven (2005).

In addition to acting, Norton has experience writing and directing films. He made his directorial debut with the film Keeping the Faith (2000). In addition to this, he performed uncredited work on the scripts for The Score, Frida, and The Incredible Hulk. He also appeared as a character in all of these films. He starred as Jack Teller in The Score, alongside Robert De Niro, and as Dr. Bruce Banner, the alter-ego of the Marvel Comics superhero the Hulk in The Incredible Hulk. He also had a minor role in Frida as Nelson Rockefeller.

In his private life, Norton is an environmental and social activist. He is a member of the board of trustees of Enterprise Community Partners, a non-profit organization for developing affordable housing, founded by his grandfather, James Rouse. Norton is president of the American branch of the Maasai Wilderness Conservation Trust. He ran in the 2009 New York City Marathon to raise money for the Trust. He also raises money for charity through Crowdrise, a social networking community for volunteers and a micro-donations fundraising platform. In July 2010, Norton was designated as the United Nations Goodwill Ambassador for Biodiversity by UN Secretary-General Ban Ki-moon.

Edward Norton was born in Boston, Massachusetts, and raised in Columbia, Maryland. His father, Edward Mower Norton, Jr., was an environmental lawyer and conservation advocate working in Asia, as well as a former federal prosecutor in the Carter administration. His mother, Lydia Robinson "Robin" (née Rouse), a teacher of English, died of a brain tumor in 1997. His maternal grandfather was the developer James Rouse (founder of The Rouse Company), who developed the city of Columbia, Maryland (where Norton grew up), helped develop Baltimore's Inner Harbor, Norfolk's Waterside Festival Marketplace, and Boston's Quincy Market, as well as co-founded Enterprise Community Partners with Norton's maternal stepgrandmother, Patty Rouse. Norton has two younger siblings—Molly and Jim, with whom he has professionally collaborated. From 1981 to 1985, along with his brother, Norton attended Camp Pasquaney, on the shores of Newfound Lake in Hebron, New Hampshire. There, he won the acting cup in 1984, and later returned to the camp's council for two years, directing theater. He maintains close connections with the camp.

Norton was raised Episcopalian. He graduated from Columbia's Wilde Lake High School in 1987. He attended Yale University, where he was a competitive rower and acted in university productions alongside Ron Livingston and Paul Giamatti, graduating in 1991 with a Bachelor of Arts in History. Following graduation, Norton worked in Osaka, Japan, consulting for his grandfather's company, Enterprise Community Partners. Norton can speak some Japanese. He appeared in an EFL textbook, Only in America, used by Nova, a formerly major English language school in Japan.

Norton moved to New York City and began his acting career in Off-Broadway theater, breaking through with his 1993 involvement in Edward Albee's Fragments, at the Signature Theatre Company. His first film was 1996's Primal Fear, which tells a story of a defense attorney (Richard Gere), who defends Aaron Stampler (Norton), an altar boy charged with the murder of a Roman Catholic archbishop. The movie is an adaptation of William Diehl's 1993 novel. Ken Tucker of Entertainment Weekly wrote: "Norton gives a performance that's fully the equal of Gere's – he's as slyly self-effacing as Gere is slyly ostentatious." Alison Macor of The Austin Chronicle, in review of the film, wrote, "Norton's performance and the well-paced tension preceding the movie's climactic sequence provide an entertaining if slightly predictable thriller." Despite the mixed reviews, Norton won a Golden Globe Award and was nominated for an Academy Award for Best Supporting Actor. That same year, Norton appeared as lawyer Alan Isaacman in The People vs. Larry Flynt.

In the 1999 film Fight Club, Norton played the nameless protagonist, an everyman and an unreliable narrator who feels trapped with his white-collar position in society. The film, an adaptation of Chuck Palahniuk's novel of the same name, was directed by David Fincher. To prepare for the role, Norton took lessons in boxing, taekwondo, and grappling. Fight Club premiered at the 1999 Venice International Film Festival. During promotion for the film, he said, "I feel that Fight Club really, in a way ... probed into the despair and paralysis that people feel in the face of having inherited this value system out of advertising." The film failed to meet expectations at the box office, and received polarized reactions from film critics. However, it became a cult classic after its DVD release. In 2008, Fight Club was named the 10th greatest movie of all time by Empire Magazine in its issue of The 500 Greatest Movies Of All Time.

In 2002, he starred in Brett Ratner's Red Dragon as FBI profiler Will Graham and in Spike Lee's 25th Hour. While Red Dragon received mixed reviews, it was commercially successful. 25th Hour was praised by critics, particularly for its examination of a post-9/11 New York City, but failed to break even. In 2003 Norton was forced by Paramount Studios, under threat of lawsuit having signed a three film contract when he signed up for Primal Fear, to appear in The Italian Job (2003), for which he accordingly refused to promote upon its release. Norton won critical acclaim for his role as Baldwin IV, the leper king of Jerusalem, in Kingdom of Heaven. Norton portrayed Marvel Comics character Bruce Banner / the Hulk in the Marvel Studios film The Incredible Hulk, released in 2008. Norton's failed attempt to rewrite the film along lines of his own choosing resulted in his refusal to promote the film. He had been expected to reprise his role as the character in the 2012 film The Avengers, but the role was later confirmed to have been given to Mark Ruffalo.

In 2006, Norton starred in two films: Down in the Valley, as a dangerous drifter affecting to be a cowpoke, and in The Illusionist, which premiered at the Sundance Film Festival and later became a sleeper hit when it went into general release. In 2010, Norton appeared in two films again: in Leaves of Grass, as estranged identical twins (one a small-time drug dealer and the other a Harvard professor); and in Stone, which reunited Norton with his The Score cast-mate Robert De Niro, and in which Norton plays a convict trying to con his parole officer (De Niro) into an early release. In 2008, Norton starred in New Line Cinema's Pride and Glory, as an honest detective assigned to investigate the precinct run by his older brother. The film was not well received by critics, not strongly supported by the studio, and despite also starring Colin Farrell and Jon Voight, its worldwide grosses totaled only $31.1 million, against a production budget of $30 million.

Norton played himself in a cameo role in the experimental comedy show Stella, and made another comedic television appearance on the Emmy award-winning ABC show Modern Family in 2010, playing a fictional member of real life '80s new wave band Spandau Ballet. In the 2012 movie The Bourne Legacy, he is the antagonist Eric Byer.

Norton has also done uncredited script work on some of the films he has appeared in, specifically The Score, Frida, and The Incredible Hulk. In 2000, Norton made his debut as a director with Keeping the Faith. He will also direct the film adaptation of the novel Motherless Brooklyn.

In 2013, Norton stared in The Lonely Island's music video, Spring Break Anthem, alongside Andy Samberg, Zach Galifinakis, James Franco, Akiva Schaffer and Jorma Taccone. The video premiered on Funny or Die's Between Two Ferns during a segment between Galifinakis and Franco.

After six years of dating, Norton became engaged to Canadian film producer Shauna Robertson in 2011, and they married in 2012. They have one son, born in March 2013.

Norton is generally known for his reluctance to embrace his celebrity status, and has said, "If I ever have to stop taking the subway, I'm gonna have a heart attack." Norton has stated in interviews that he is a fan of the Baltimore Orioles, and was involved in many of Cal Ripken Jr.'s retirement activities in 2001 when he was asked to be a part of Ripken's biography for Major League Baseball (MLB). He attended Ripken's ceremony at the Hall of Fame in July 2007. Norton has a private pilot license and discussed his flight training when interviewed on episodes of the Late Show with David Letterman and Inside the Actor's Studio.

Norton was a strong supporter of former New York State Governor Eliot Spitzer. Norton is a member of the board of trustees of Enterprise Community Partners, a non-profit developer of affordable housing based in his hometown. He is also well known for his support for environmental causes and renewable energy projects, such as Enterprise's Green Communities Initiative and BP's Solar Neighbors program. He also put time and money toward social activist causes, including improving the quality of living in low-income communities.

Norton's work with the HBO documentary By the People: The Election of Barack Obama led to a soundtrack, with proceeds going to Enterprise Community Partners and United Way. Norton also participated in a 2008 Fast Company story about Enterprise's green affordable housing.

Norton is president of the American branch of the Maasai Wilderness Conservation Trust. To raise money for the trust, Norton fielded a team of 30 runners in the New York City Marathon on November 1, 2009. The team included Alanis Morissette and David Blaine. Norton finished the event first among celebrities with a time of 3 hours, 48 minutes. Norton and his team raised over $1 million for the Trust. In May 2010, Norton launched a website called Crowdrise, which uses a social networking platform to help raise funds for charity.

In May 2012, Norton played football for an 'England vs. The Rest of the World' match the charity event Soccer Aid along with other actors such as Will Ferrell and Woody Harrelson. The event eventually raised over £4,000,000 for UNICEF UK.