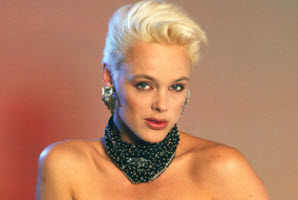 Brigitte Nielsen (born 15 July 1963) is a Danish actress, model, musician and reality television personality who began her career modelling for Greg Gorman and Helmut Newton and several years later acted in the 1985 films Red Sonja and Rocky IV. She is also known for her marriage to Sylvester Stallone, with whom she starred in the 1986 film Cobra. She played Karla Fry on Beverly Hills Cop II (1987), co-starring Eddie Murphy, and played the Dark Witch in the Italian TV Series Cave of the Golden Rose between 1992-1996. She appeared also in Michael Jackson's "Liberian Girl" and Austrian Rock Star Falco's "Body Next To Body" music videos.

Her exploits were well-covered in the entertainment media in the 1980s, and the world press started referring to her as an "Amazon" because of her tall stature (verified by the Guinness Book of World Records at 6 ft, or 1.82 meters).

She later built a career appearing in B-movies, and in the 2000s, for appearing on reality shows such as Flavor of Love. In 2008, she appeared on the reality show Celebrity Rehab with Dr. Drew, which depicted her and several other celebrities dealing with recovery from drug and alcohol addiction.

She released several albums between 1987-2002 (Every Body Tells a Story, I'm the One... Nobody Else and more singles). Recently, she performed (as Gitte Nielsen) on the song Misery with Spleen United, from the album School of Euphoria (2012).

Nielsen was born Gitte Nielsen in Rødovre, a suburb of Copenhagen, Denmark, the daughter of Hanne, a librarian, and Svend Nielsen, an engineer. She has a brother, Jan.

At the beginning of the 1980s, Nielsen did some modeling work, and was photographed by Greg Gorman and Helmut Newton.

In 1985, Nielsen began her acting career in Red Sonja alongside Arnold Schwarzenegger. In the same year, she met and married Sylvester Stallone; the couple acted in two movies together (Rocky IV and Cobra) before divorcing in 1987. Their marriage and divorce were both highly publicized by the tabloid press. She posed for Playboy magazine multiple times, garnering the cover in December 1987. She played also "Karla Fry" in the movie Beverly Hills Cop II (1987), alongside Eddie Murphy.

Nielsen started a music career in 1987. She released her debut album Every Body Tells a Story in that year and recorded a duet with Austrian pop star Falco, Giorgio Moroder's penned "Body Next to Body" which went to #22 in Germany and #6 in Austria. In 1990, she recorded a single called "Rockin' Like a Radio".[citation needed] She released a follow-up album, I'm the One... Nobody Else, in 1991. In 2000, she recorded the dance track "No More Turning Back" under the pseudonym of Gitta and reached #1 in Spain and topped several other European dance charts. Other tracks recorded as Gitta were 2001's "Tic Toc" and 2002's "You're No Lady", a collaboration with Ru Paul.

She has worked for Italian television, hosting shows such as: Festival (1987), the 1992 edition of the Sanremo Music Festival, Retromarsh! (1996–1997), and ..la sai l'ultima? (1999); starring in the TV movie Fantaghirò 2 and its sequels (1992–1996); and guest starring in the Rai Tre's soap opera Un posto al sole (2000).[citation needed] In 1997, she hosted a talk show series called Gittes venner for a Danish TV network and some TV shows for RTSI, the Swiss television in the Italian language.[citation needed]

On 28 August 2008, German record label Edel Music re-released her 1991 album I'm the One... Nobody Else and the 1987 Every Body Tells a Story under the title Brigitte Nielsen.

On 27 October 2009, she published her first auto-biography in Scandinavia titled: "Gitte Nielsen – Du har kun ét liv – sådan fandt jeg tilbage til mig selv" (translation: "You only have one life – this is how I found myself again."). The book reached the Top5 of Denmark's bestseller list. The book has been released in the United Kingdom under the title You only get one life in May 2011.

In April 2011, she attended the British variety/talent show Sing If You Can, which aired on ITV.

In November 2010, she guest starred for one episode in the German TV series SOKO: Stuttgart, aired by ZDF on 28 March 2011.

In 2013, she starred in the science-fiction movie Exodus.

Nielsen appeared on the first season of the Italian production of The Mole (2004) and on the third season of the VH1 reality show The Surreal Life (2004). Nielsen also appeared with Flav on VH1's Big in '04 Awards. In 2006, she guest-starred on Flav's other reality show, Flavor of Love.

In 2003, Nielsen appeared in the Danish Big Brother VIP. In January 2005, she was a contestant in Britain's Celebrity Big Brother, along with her former mother-in-law, Jackie Stallone. Nielsen came third in the final public vote. In 2006, she appeared in another reality TV series, VH1's The Surreal Life: Fame Game. In March 2007, she starred in a new British mockumentary called Killing Brigitte Nielsen, which aired on Sky Travel. She also appeared in the first season of Celebrity Rehab with Dr. Drew, which chronicled her struggle to overcome her alcoholism at the Pasadena Recovery Center in Pasadena, California.

In May 2008, she revealed on German television that she would "renew" her body by having six plastic surgeries, which would cost €66,000 altogether. Nielsen was filmed during those surgeries by RTL and she had her own television show "Aus alt mach neu – Brigitte Nielsen in der Promi-Beauty-Klinik"(Make do and mend – Brigitte Nielsen in the celebrity beauty hospital). The same show was broadcasted twice in Italy: at first under the title Celebrity Makeover: Brigitte Nielsen on SKY Italia in December 2008 and secondly in 2009 on Italia 1.

In 2009, Nielsen appeared as a panel speaker to a new group of addicts at the Pasadena Recovery Center, anticipating the two-year mark of her sobriety that coming July. Her appearance was aired in the third season episode "Triggers", which aired in February 2010.

In January 2010, Nielsen appeared as one of the celebrity contestants of the French reality show TF1's La Ferme Célébrités, the French version of the TV series The Farm. She was eliminated after one week, mainly due to her lack of fluency in French and subsequent difficulties to interact with the other contestants.

Nielsen was one of the celebrity contestants of 2010's Let's Dance, the German version of Dancing with the Stars. In 2010, she took part of Celebrity Come Dine With Me in Denmark (Til middag hos... ), and in Germany (Das Perfekte Promi Dinner).

From January 13, 2012, she was one of the celebrity contestans and winner of Ich bin ein Star – Holt mich hier raus!, the German version of I'm a Celebrity...Get Me Out of Here!, broadcast by RTL Television.[30] On January 28, 2012, she won the show as the Jungle Queen. The German Bildzeitung revealed on January 30, 2012 that Nielsen had received the most calls from TV viewers throughout the entire show, ranking No.1 with 30 - 50% of all call-ins.

In October 2012 she was featured in the Danish version of Maestro broadcasted on DR1 in which celebrities competed for the chance to conduct a classical orchestra.

Nielsen has been married five times and has four sons. She has a son Julian Winding (born in 1984) with first husband Kasper Winding whom she was married to from 1983-1984.

Her second son, Killian Marcus Nielsen (born in 1989), she had with ex-fiance Mark Gastineau.

Between 1990 and 1992, she was married to director and photographer Sebastian Copeland (Orlando Bloom's cousin).

In 2005, Nielsen had a highly-profiled relationship with rapper Flavor Flav. The relationship was filmed on their reality show Strange Love.

Her current husband, Mattia Dessi lived with her in Italy as shown on Strange Love, which was filmed prior to their marriage. They live in Palm Springs.

In the aftermath of Arnold Schwarzenegger's infidelity scandal, Nielsen came forward and confessed that she too had an affair with Schwarzenegger while he was in a relationship with Maria Shriver, saying, "Maybe I wouldn't have got into it if he said 'I'm going to marry Maria' and this is dead serious, but he didn't, and our affair carried on."

In January 2012, during an interview on the German Reality TV-Show Ich bin ein Star – Holt mich hier raus!, she confessed once having an one-night stand with Sean Penn in Cannes.

On 9 July 2007, Nielsen checked herself into the Cri-Help rehabilitation facility in North Hollywood following what some reports claim was a family intervention. Her manager, Steven Tempone, confirmed on 19 July 2007 that she had checked into rehabilitation and told the Associated Press "All I know is it's something she did of her own free will and we're proud of her and wish her very well...When she gets out we'll have a big birthday party, and Coca-Cola only".

As of 22 July 2007, Nielsen was out of rehabilitation to attend the Comedy Central roast of Flavor Flav. She told People that she felt "like a new-born person ... I made a choice about a new life. It's not been easy but it was definitely time." While People does not report the date that Nielsen checked into rehabilitation, it states she "had been in treatment for a few weeks". On 10 January 2008, VH1 began airing the reality TV series, Celebrity Rehab with Dr. Drew. Nielsen appeared on the show for alcoholism.

In mid-2008, Nielsen starred in the reality show Aus alt mach neu, broadcast by the German TV-station RTL. The theme of the show was Nielsen's attempt to look "as young as her husband" by undergoing plastic surgery. The show was aired in Italy as well, on SKY Italia during December 2008 and the following summer on Italia 1.

Besides her native Danish, Nielsen is fluent in Swedish, Norwegian, English, German and Italian, and has some understanding of French.