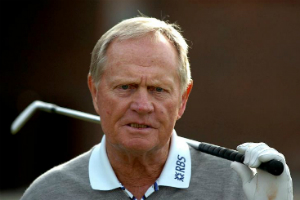 Nicklaus is the son of Helen and Charlie, a pharmacist who had three drugstores in Columbus. His dad wasn't just verbally supportive of Jack, he went with him to events and Jack considers his dad his best friend. Burly, blond and 5' 10" he is known by the nickname of "Golden Bear." He was born color-blind and has always needed help in picking his wardrobe.

He won his first major championship, the U.S. Amateur, in 1959, as a 19-year old sophomore at Ohio State University. Two years later, he won it again as a senior. In January 1962 he turned pro and won his first U.S. Open that same year. During the 1960s and most of the 70s he dominated the sport as no one else ever had. He won 88 tournaments, including 19 majors. Nicklaus is known as a sportsman in the truest sense of the word, a gentleman and nice guy. To his two U.S. Amateur championships he added four U.S. Open titles, three British Opens, five Professional Golfers' Association titles and five Masters championships. In 1986, at 46, he won the 50th Masters Tournament for the sixth time. At 56 he won his 100th tournament of his professional career. He continues to play in the Seniors Tournaments. Nicklaus has also earned worldwide acclaim as an architect and builder of golf courses, which number nearly 100.

Both Nicklaus and his wife, Barbara, grew up in Columbus, OH, but they didn't meet until their first week at Ohio State. Married on 7/23/l960, they have five kids: Jack Jr., Steve, Nan, Gary and Michael. The oldest son, Jackie, is himself a golfer of promise and winner of the prestigious North and South Amateur.

The kids are one reason Nicklaus has not played as many tournaments as most other professional golfers. Modeling himself after his own dad, he has been there for his kids Little League, football games, basketball games and graduations. Even though the four older kids received college athletic scholarships,.

they were never pushed into sports. Their mom, Barbara, claims there is an intense rivalry in sports among them, "Playing golf with his sons has sharpened his competitive instincts. The boys have played a big part in getting him ready to play in tournaments."

He announced in 1998 that he would be retiring from the sport of golf for health reasons. With a brittle hip, he either must have hip replacement surgery, an option he finds distasteful, or he will adhere to a strict workout regimen that will allow him to continue playing the game he loves. He has played in eight Senior opens, winning in 1991 in Oakland Hills (Birmingham, MI) and in 1993 at Cherry Hills (Englewood, CO). He has five top-three finishes and only once has he not finished in the top ten. In 1996 he won in the Tradition, the Senior Tour version of the Masters.

A tragic accident befell Nicklaus and his family on March 1, 2005. One of Nicklaus’ 17 grandchildren, 17-month-old Jake Walter Nicklaus, apparently drowned in the hot tub at the toddler’s home in Palm Beach, Fl. He was found by his nanny and rushed to the hospital to no avail. Little Jake was the child of golf-course designer Steve Nicklaus and his wife Krista.