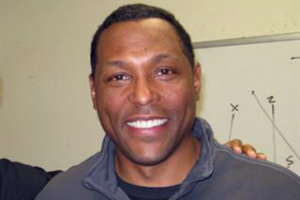 Hardy Otto Nickerson (born September 1, 1965 in Compton, California) is a former American football linebacker who played 16 seasons for four teams from 1987 to 2002 in the National Football League and is currently the head football coach at Bishop O'Dowd High School in Oakland, Calif. He attended Verbum Dei High School, a Catholic school located in Watts, California. He earned a BA degree in Sociology from the University of California, Berkeley in 1989. Nickerson spent the prime of his career with the Tampa Bay Buccaneers. The hiring of head coaches Sam Wyche and Tony Dungy allowed Nickerson to play in the middle in both coaches' 4-3 defensive alignment (Nickerson played the 3-4 in Pittsburgh), sending Nickerson to five Pro Bowls and joining the NFL's 1990s All-Decade Team.

In 2006, Nickerson became the color analyst for the Buccaneer Radio Network, teaming him with the longtime veteran play-by-play man Gene Deckerhoff.

He is known by many people as Hardy "The Dragon" Nickerson. On February 23, 2007 he was named linebackers coach of the Chicago Bears, where he coached for his former Tampa Bay position coach, Lovie Smith. On January 8, 2008 he resigned from the Bears due to health issues within his family.