We are delighted to announce a new Human Design Chart for Pro Members.

This is the new Connection Transit Chart. 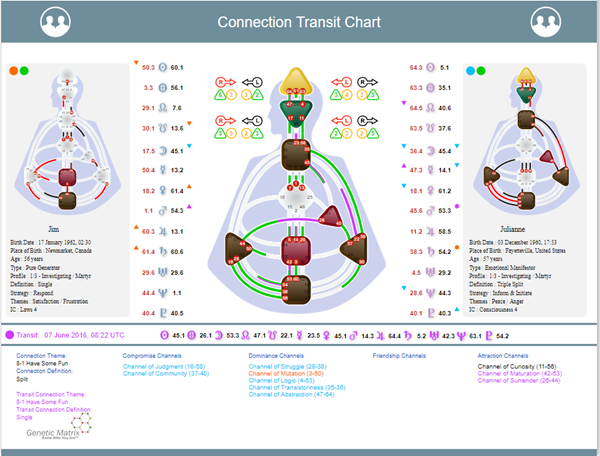 The planetary transit field can have a significant impact on a connection between two people.

This new chart shows you precisely the impact of the transiting planets on a connection between two people.

The vast majority of people choose their connections based upon what their mind is “attracted” to.  This leads to many potential dilemmas in the connection itself.

Many couples have difficult relationship configurations because of the transit field. This can bring the “illusion” to mind that something is permanent in a connection when, in fact, it is not.

For example – Pluto takes 3 years to move through a single gate.

If Pluto was the planet that was the bridge in what is a split definition connection there is an illusion of wholeness to both people in the connection.

If you then “get” to know the person for a year or so and really take your time before committing it would seem that you are not making that decision in haste.

Potentially there is a marriage and commitment  in year 2.

In Year 3, Pluto moves on and the couple are left with a split definition relationship. They finally get to feel the true nature of their connection only after 3 years.

The transit can bring many illusions to distract the mind –  an illusion of an 8-1 connection (Have some fun) when the reality is that the connection is really a 6-3 (Better to be free). The Transit field was filling in the other two centers.

This Transit chart is also useful for people in relationships where there is normally a split or they have centers normally undefined.

With this transit chart you can see when the “split” will be bridged. If the split was at the throat from the mind. This couple will be able to share their minds for the period of the transit. Which ordinarily they cannot.

If the Transit is defining the Emotional Center for the couple….perhaps some consistent passion is now available to both or there will be the potential for emotional confrontations for the period of the transit.

There are many variables in the transit field that can affect any connection day to day if you are making mental decisions.

This new connection transit chart can be created for any day or time in the past or the future.