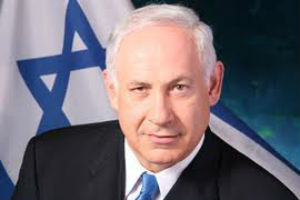 Israeli politician who was elected Israel's leader by a narrow margin on 5/31/1996 while running against Peres as P.M. He is known as "Bibi," a handsome, hot-tempered and relatively inexperienced politico, being young at 46. He ran an "American-style" campaign aimed at the power of the modern media with both vision and sound-bites. His theme was Peace - with Security, representative of his flagrant distrust of Arabs and his vow to be tough on terrorists. Under Netanyahu, Israel is booming; opening up to both trade, and foreign investments.

During the Yom Kippur War in 1973, he fought as a Captain in a paratrooper unit. His brother died in the raid on Entebbe.

Netanyahu is a graduate of MIT's Grad Sloan School of Management in the U.S. He graduated in 1976 with both a B.A., and a Ph.D. A member of the Likud Party, he took the office of Deputy Foreign Minister of Israel in November of 1988.

He has a young wife, Sarah, and a son, Yair.

From mid-January, 1997, his administration has been virtually paralyzed by an influence-peddling scandal. On April 17, Israel radio reported that Netanyahu would not be prosecuted. Since then, both major parties have been fraught with tension.

In May 1999, he was soundly defeated by Ehud Barak.

Corruption allegations continued to plague him. He and his wife Sara were suspected of conspiring in kickback schemes, keeping gifts and obstructing justice, but "difficulties with the evidence," were still an obstacle in late 2000.