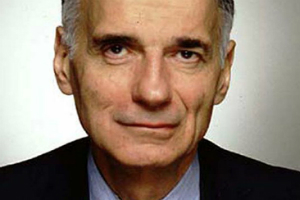 American attorney and consumer advocate who effectively changed American awareness of product viability. His work led to the Traffic Safety Act of 1968 and many other consumer safety laws.

After serving in the Army, Nader set up a small legal practice in Hartford, CT and traveling widely. With a highly developed social consciousness, he became distressed at the indifference of American corporations and the abuse of their power. Idealistic and modest, the lanky 6'4" Nader is known for his Spartan habits and for working 16 hours a day, seven days a week.

He moved to Washington DC in 1964, writing "Unsafe At Any Speed" the following year in which he accused the auto industry of producing unsafe vehicles. This led to the passage of the National Traffic and Motor Vehicle Safety Act in 1966. Nader played a key role in the creation of the Environmental Protection Agency, the Occupational Safety and Health Administration, the Freedom of Information Act and the Consumer Product Safety Commission. He was at his peak in 1977 when he guest hosted "Saturday Night Live," and lampooned his own obsession.

Time magazine included Nader on their list of 100 most influential Americans in the 20th century. His agenda of product safety and greater corporate accountability became the nation's agenda. When he set his Raiders loose with exposes of federal agencies, Congress created the Environmental Protection Agency and the Freedom of Information Act. He founded the Center for Responsive Law, Public Citizen, Inc. a non-profit organization, and Essential Information, in 1982, to publish a monthly magazine, books, reports and sponsor investigative journalism.

Becoming known as America's renowned and effective crusader for the rights of consumers and the general public, he has repeatedly been in conflict with both business and government. During the Reagan era, Nader lived through a time of personal and professional loss. He seemed to lose his romance with Washington and his advocacy groups hit a stone wall. At the height of the Reagan White House, Nader developed a nerve condition called Bell's palsy that froze one side of his face. Said to be stress-related and temporary, it hung on persistently. The neuritis caused him to involuntarily shed tears; he took to wearing sunglasses. At the same time, in 1986, his older brother, Shafeek, with whom he shared a home and to whom he was closer than anyone in the world, was dying of prostate cancer. After ten years of serving as a symbol of our industrial malaise, it became a time when reporters and politicians avoided him and columnists sought to write his obituary.

Nader once again emerged into the national consciousness in the '90s, perhaps less rigid, certainly more in touch with the public. His issues tend to be economic ones, such as the pay-hike sought by Congress (defeated). He came out with his book, "Winning the Insurance Game," a call to arms against Goliath corporations.

With a personal life style that is monastic, Nader does not even own a car and lives alone. He has little interest in clothes and less in entertainment, spending less than $10,000 a year on himself. Lanky and stooped, gawky and humble, he may be seen in an old fashioned suit as he answers people's praise with democratic homespun's. A non-smoker or drinker, he eats simply with no junk food, little meat, and at his Center has a rule; no sodas. Personal questions make him squirm, hunch, draw his big head into his shoulders, then flee. He is habitually obsessive about cleanliness, pressing a waitress about whether the strawberries have been washed. He says he's never been close to marriage and his life revolves around his work. For relaxation, he is a sports fan. Friends and associates describe him as witty and personable as well as dedicated and driven. He is obsessively private and does not give out his personal address.

In 1996 he appeared on the California primary ballot as a candidate for the presidential nomination of the Green Party. Once again a Green Party candidate nominated 6/24/2000, he aims at looming changes of the medical system to force creation of universal health care. He said that he doubts that either Al Gore or George W. Bush would push for "sound medical plans for every American." In the 1996 elections, he got less than 1 percent of the vote as the Green's candidate, but he said that he would actively campaign in 2000 in all 50 states. Nader's latest book is "No Contest: Corporate Lawyers and the Perversions of Justice in America."

Despite pleas not to run from many former supporters, Ralph Nader announced his candidacy for President as an Independent. He made his intention clear on "Meet the Press," Sunday, February 22, 2004.

The Presidential hopeful chose Green Party politician Peter Camejo for his running mate on June 21, 2004. Not even a week later, on June 27, 2004, the Green Party announced that it was endorsing other candidates for its sponsorship in the 2004 elections.