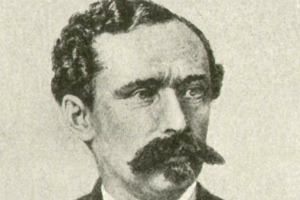 Gustav Nachtigal (23 February 1834 – 20 April 1885) was a German explorer of Central and West Africa. He is further known as the German Empire's consul-general for Tunisia and Commissioner for West Africa. His mission as commissioner resulted in Togoland and Kamerun becoming the first colonies of a German colonial empire. The Gustav-Nachtigal-Medal, awarded by the Berlin Geographical Society, is named after him.

Gustav Nachtigal, the son of a Lutheran pastor, was born at Eichstedt in the Prussian province of Saxony-Anhalt. After medical studies at the universities of Halle, Würzburg and Greifswald, he practiced for several years as a military surgeon. Finding the climate of his native country increasingly detrimental to his health, he went to Algiers and Tunis in North Africa and took part, as a surgeon, in several expeditions into Central Africa.

Commissioned by King Wilhelm I of Prussia to carry gifts to Umar of Borno, sheik of the Bornu Empire, in acknowledgment of kindness shown to German travelers, he set out in 1869 from Ottoman Tripoli and succeeded after a two years journey in accomplishing his mission. During this period he visited Tibesti and Borku, regions of the central Sahara not previously known to Europeans.

From Bornu he traveled to Baguirmi, an independent state to the southeast of Bornu. From there he proceeded to Wadai (a powerful Muslim kingdom to the northeast of Baguirmi) and to Kordofan (a former province of central Sudan). Nachtigal emerged from darkest Africa at Khartoum (then an Egyptian outpost, today the capital of Sudan) in the winter of 1874, after having been given up for lost. His journey, graphically described in his Sahara and Sudan, placed him in the top ranking of discoverers.

After the establishment by France of a protectorate over Tunisia, Nachtigal was sent as consul-general for the German Empire and remained there until 1884. Thereafter he was appointed by Chancellor Otto von Bismarck as special commissioner for West Africa. Local German business interests in that region began advocating for protection by the German Empire after they had acquired huge properties in West Africa. Nachtigal’s task was thus to accept that real estate on behalf of Germany before the British could advance their own interests — and Togoland and Kamerun became Germany’s first colonial possessions. On his return voyage he died at sea aboard the gunboat SMS Möwe off Cape Palmas on 20 April 1885 and was initially interred at Grand Bassam. In 1888 Nachtigal’s remains were exhumed and reburied in a ceremonial grave at Duala in front of the Kamerun colonial government building.

Gustav Nachtigal is regarded as the other great German explorer of Africa, in company with Heinrich Barth. Like Barth, Nachtigal was primarily interested in ethnography, and additionally in tropical medicine. His works stand out because of their wealth of details and above all because of his unbiased views of Africans. In contrast to most contemporary explorers, Nachtigal did not hold to the alleged inferiority of Africans; his convictions are clearly reflected in his descriptions and choice of words.

He had witnessed slave hunts performed by African rulers and the cruelties inflicted by them on other Africans. The horror that he felt about these atrocities made him enter colonial endeavors because he somewhat naively accepted that European domination of the African continent might stop slave hunting and slave keeping.