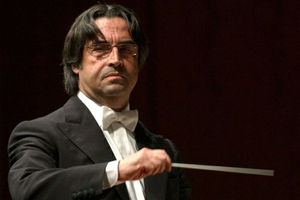 Italian musician and orchestra conductor, especially admired for his Verdi performances. Muti conducts the Philadelphia Orchestra and the La Scala Opera Orchestra. A handsome, dramatic conductor, Muti is the epitome of a glamour maestro. He is an Italian celebrity easily recognized by his fans while out and about in his blue Mercedes sporting his tailored Armani suits. Muti is one of the highest paid conductors earning $650,000 for 15 weeks in Philadelphia in 1989. He remains comfortable and relaxed in his clockwork organization style despite his heavy performance schedule.

Muti played violin and piano in his childhood. He grew up in Naples and went to study at the local Naples University. He moved to Milan and attended the Verdi Conservatory where he learned to conduct at the age of 20. In 1967, he won acclaim as he took first prize at the Guido Cantelli Competition for Conductors.

In 1969, he was appointed music director of the Maggio Musicale Festival in Florence, Italy. He conducted for the festival for eleven years. In 1972, he succeeded Otto Klemperer as the principal conductor of the Philharmonic Orchestra in London, with which he worked for ten years. In 1980, he moved to the Philadelphia Orchestra. It took time for the Italian conductor to win over the musicians and tradition-loving audience of the City of Brotherly Love. The orchestra was limited to lush sounds of the late-Romantic music of Mahler and Brahms. Muti introduced some 20th-Century compositions along with the works of the Classical and Baroque period. After nine years with the Philadelphia Orchestra, the audience has come to accept him alongside their beloved Eugene Ormandy. In their 1992-93 season, Muti was instrumental in fundraising for the new concert hall designed by post-modern architect Michael Graves for $103 million.

In 1986, Muti raised the baton for the La Scala Opera House. Like his work in Philadelphia, he has been a success in bringing new musical life to an audience of traditionalists. At 48, he felt it was time to take chances in conducting. He hired rising young stage directors and commissioned a new opera for every opera season. In Philadelphia, he commissioned new works by modern American composers encouraging the American classical music scene. He takes chances and refuses to be pedestrian and a traditionalist on the international classical music world. With his busy schedule, Muti limits his guest conducting appearances to Vienna, Salzburg, Berlin and London. He continues to make countless albums a year to satisfy EMI and Philips, his two contractual record companies.

Muti lives in Ravenna, Italy and often jets between Milan, Italy and Philadelphia. After 19 years of service, he retired from La Scala on April 2, 2005 citing staff hostility. Married, he has three children.