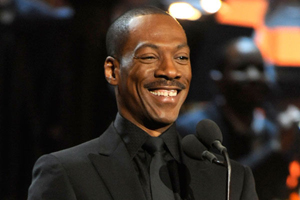 Edward "Eddie" Regan Murphy (born April 3, 1961, Brooklyn, New York City) is an Academy Award nominated, Golden Globe Award-winning American actor and comedian. He has also enjoyed a minor singing career, and was one of the most popular cast members in the history of Saturday Night Live, on which he was a regular from 1980 to 1984. In a 2005 poll to find The Comedian's Comedian, he was voted amongst the top 50 comedy acts ever by fellow comedians and comedy insiders.

Murphy has received Golden Globe nominations for best actor in a comedy or musical for his performances in Beverly Hills Cop, Trading Places, and The Nutty Professor. In 2007, he won the Golden Globe for Best Supporting Actor for his portrayal of fictitious soul singer James "Thunder" Early in Dreamgirls., and received a nomination for the Academy Award for Best Supporting Actor for the same role.

He is a well-known voice actor and voiced Thurgood Stubbs in The PJs, Donkey in the Shrek series and the dragon Mushu in Disney's Mulan. In some of his films, he plays multiple roles in addition to his main character, including Coming to America, where he played four radically different characters, the Nutty Professor films, where he played much of the Klumps clan, and 2007's Norbit. Another trademark of Murphy is his deep, infectious, and considerably goofy laugh.

As of May, 2007, with the box office success of both films "Norbit" and "Shrek the Third", Eddie Murphy has now surpassed Tom Hanks and Samuel L. Jackson to claim the throne as history's #1 all-time box office movie star. Mr. Murphy's grosses as a leading man now total over $3.35 Billion Dollars at the North American box office alone.

Personal life
Murphy has donated money to the AIDS Foundation, the Martin Luther King Jr. Center, various cancer charities and $100,000 to the Screen Actors' Guild's strike relief fund. He also reinvests heavily in his own organizations. In addition, toward the end of 2006, he and fellow Roosevelt High School alumnus Julius "Dr. J" Erving quietly gave over a million dollars to the ailing school district to assist with the continuation of the sports program.

Murphy was rumored to have dated Whitney Houston before meeting his wife. He began a longtime romantic relationship with Nicole Mitchell after meeting her in 1988 at an NAACP Image Awards show. They lived together for a year and a half before getting married at the Grand Ballroom of The Plaza Hotel in New York City on March 18, 1993. They had five children together, but in August 2005, Mitchell filed for divorce, citing "irreconcilable differences." The divorce was finalized on April 17, 2006.

On May 2, 1997, around 4:45am, Eddie Murphy picked up pre-op transexual prostitute Atisone Seiuli Shalimar (called "Shalimar") on Santa Monica Boulevard in West Hollywood. This area was to be inside a "prostitution abatement zone" designated by the Los Angeles County Sheriff's Department. Deputies pulled over Murphy's Toyota Land Cruiser, arrested his passenger for outstanding warrants, and released Murphy. The incident made tabloids and late night talk show monologues for months afterwards.

Following his divorce from Mitchell, he dated Melanie Brown, who stated that her child is Murphy's. When questioned about the pregnancy in December 2006, Murphy told a reporter, "I don't know whose child that is until it comes out and has a blood test. You shouldn't jump to conclusions, sir." Brown gave birth to a baby girl on Murphy's 46th birthday, April 3, 2007. Murphy is presently dating film producer Tracey Edmonds, former wife of Kenny "Babyface" Edmonds.