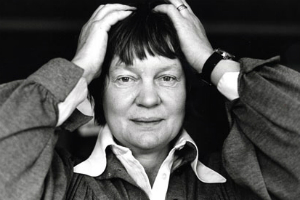 Dame Iris Murdoch DBE (15 July 1919 – 8 February 1999) was an Irish-born British author and philosopher, best known for her novels about good and evil, sexual relationships, morality, and the power of the unconscious. Her first published novel, Under the Net, was selected in 1998 as one of Modern Library's 100 best English-language novels of the 20th century. In 1987, she was made a Dame Commander of the Order of the British Empire. In 2008, The Times ranked Murdoch twelfth on a list of "The 50 greatest British writers since 1945".

Jean Iris Murdoch was born in Phibsborough, Dublin, Ireland, on 15 July 1919. Her father, Wills John Hughes Murdoch, came from a mainly Presbyterian sheep farming family from Hillhall, County Down, in Northern Ireland. Her mother, Irene Alice Richardson, who had trained as a singer before Iris was born, was from a middle class Church of Ireland family in Dublin. Hughes Murdoch, a civil servant, enlisted as a soldier in King Edward's Horse in 1915 and served in France during World War I before being promoted to Second lieutenant. Iris Murdoch's parents first met in Dublin when he was on leave, and were married in 1918 . Iris was the couple's only child. When she was a few weeks old the family moved to London, where her father had joined the Ministry of Health as a second class clerk.

She was educated in private progressive schools, entering the Froebel Demonstration School in 1925, and attending Badminton School in Bristol as a boarder from 1932 to 1938. She went to Somerville College, Oxford in 1938 with the intention of studying English, but switched to Greats. At Oxford she studied philosophy with Donald M. MacKinnon and attended Eduard Fraenkel's seminars on Agamemnon. She was awarded a First Class Honours degree in 1942. After leaving Oxford she went to work in London for HM Treasury. In June 1944 she left the Treasury and went to work for the UNRRA. At first she was stationed in London at the agency's European Regional Office. In 1945 she was transferred first to Brussels, then to Innsbruck, and finally to Graz, Austria, where she worked in a refugee camp. She left the UNRRA in 1946.

She studied philosophy as a postgraduate at Newnham College, Cambridge, where she met Ludwig Wittgenstein. In 1948, she became a fellow of St Anne's College, Oxford. She received Honorary Degrees from the University of Bath (DLitt,1983), University of Cambridge (1993) and Kingston University (1994).

She wrote her first novel, Under the Net, in 1954, having previously published essays on philosophy, and the first monograph about Jean-Paul Sartre published in English. It was at Oxford in 1956 that she met and married John Bayley, later to be a professor of English literature and also a novelist. She went on to produce 25 more novels and other works of philosophy and drama until 1995, when she began to suffer the early effects of Alzheimer's disease, the symptoms of which she at first attributed to writer's block. She died, aged 79, in 1999, and her ashes were scattered in the garden at the Oxford Crematorium.

Her philosophical writings were influenced by Simone Weil (from whom she borrows the concept of 'attention'), and by Plato, under whose banner she claimed to fight. In re-animating Plato, she gives force to the reality of the Good, and to a sense of the moral life as a pilgrimage from illusion to reality. From this perspective, Murdoch's work offers perceptive criticism of Sartre and Wittgenstein ('early' and 'late'). Her most central parable concerns a mother-in-law 'M' who works to see her daughter-in-law 'D' "justly or lovingly". The parable is partly meant to show (against Oxford contemporaries including R. M. Hare and Stuart Hampshire) the importance of the 'inner' life to moral action. Seeing another aright can depend on overcoming jealousy, and discoveries about the world involve inner work.

Her novels, in their attention and generosity to the inner lives of individuals, follow the tradition of novelists like Dostoevsky, Tolstoy, George Eliot, and Proust, besides showing an abiding love of Shakespeare. There is however great variety in her achievement, and the richly layered structure and compelling realistic comic imagination of The Black Prince (1973) is very different from the early comic work Under The Net (1954) or The Unicorn (1963). The Unicorn can be read as a sophisticated Gothic romance, or as a novel with Gothic trappings, or perhaps as a parody of the Gothic mode of writing. The Black Prince, for which Murdoch won the James Tait Black Memorial Prize, is a study of erotic obsession, and the text becomes more complicated, suggesting multiple interpretations, when subordinate characters contradict the narrator and the mysterious "editor" of the book in a series of afterwords. Though novels differ markedly, and her style developed, themes recur. Her novels often include upper-middle-class male intellectuals caught in moral dilemmas, gay characters, refugees, Anglo-Catholics with crises of faith, empathetic pets, curiously "knowing" children and sometimes a powerful and almost demonic male "enchanter" who imposes his will on the other characters—a type of man Murdoch is said to have modelled on her lover, the Nobel laureate Elias Canetti.

Murdoch was awarded the Booker Prize in 1978 for The Sea, the Sea, a finely detailed novel about the power of love and loss, featuring a retired stage director who is overwhelmed by jealousy when he meets his erstwhile lover after several decades apart. An authorized collection of her poetic writings, Poems by Iris Murdoch, appeared in 1997, edited by Paul Hullah and Yozo Muroya. Several of her works have been adapted for the screen, including the British television series of her novels An Unofficial Rose and The Bell. J. B. Priestley's dramatisation of her 1961 novel A Severed Head starred Ian Holm and Richard Attenborough.

In 1997, she was awarded the Golden PEN Award by English PEN for "a Lifetime's Distinguished Service to Literature".

Iris Murdoch won a scholarship to study at Vassar College in 1946, but was refused a visa to enter the United States because she had joined the Communist Party of Great Britain in 1938, while a student at Oxford. She left the party in 1942, when she went to work at the Treasury, but remained sympathetic to communism for several years. In later years she was allowed to visit the United States, but always had to obtain a waiver from the provisions of the McCarran Act, which barred Communist Party members and former members from entering the country. In a 1990 Paris Review interview she said that her membership in the Communist Party had made her see "how strong and how awful it Marxism is, certainly in its organized form".

Aside from her Communist Party membership, Ireland is the other sensitive detail of Murdoch's political life that seems to attract interest. Part of the interest revolves around the fact that, although Irish by both birth and traced descent on both sides, Murdoch does not display the full set of political opinions that are sometimes assumed to go with this origin: "No one ever agrees about who is entitled to lay claim to Irishness. Iris's Belfast cousins today call themselves British, not Irish... but with both parents brought up in Ireland, and an ancestry within Ireland both North and South going back three centuries, Iris has as valid a claim to call herself Irish as most North Americans have to call themselves American". Conradi notes A.N. Wilson's record that Murdoch regretted the sympathetic portrayal of the Irish nationalist cause she had given earlier in The Red and the Green, and a competing defence of the book at Caen in 1978. The novel while broad of sympathy is hardly an unambiguous celebration of the 1916 rising, dwelling upon bloodshed, unintended consequences and the evils of romanticism, besides celebrating selfless individuals on both sides. Later, of Ian Paisley, Iris Murdoch stated "he sincerely condemns violence and did not intend to incite the Protestant terrorists. That he is emotional and angry is not surprising, after 12-15 years of murderous IRA activity. All this business is deep in my soul, I’m afraid." In private correspondence with her close friend and fellow philosopher Philippa Foot, she remarked in 1978 that she felt "unsentimental about Ireland to the point of hatred" and, of a Franco-Irish conference she had attended in Caen in 1982, said that "the sounds of all those Irish voices made me feel privately sick".

Peter J. Conradi's 2001 biography was the fruit of long research and authorised access to journals and other papers. It is also a labour of love, and of a friendship with Murdoch that extended from a meeting at her Gifford Lectures to her death. The book was well received. John Updike commented: "There would be no need to complain of literary biographies… if they were all as good". The text addresses many popular questions about Murdoch, such as how Irish she was, what her politics were, etc. Though not a trained philosopher, Conradi's interest in Murdoch's achievement as a thinker is evident in the biography, and yet more so in his earlier work of literary criticism The Saint and the Artist: A Study of Iris Murdoch's Works (Macmillan 1986, HarperCollins 2001). He also recalled his personal encounters with Murdoch in Going Buddhist: Panic and Emptiness, the Buddha and Me. (Short Books, 2005). Conradi's archive of material on Murdoch, together with Iris Murdoch's Oxford library, is held at Kingston University.

An account of Murdoch's life with a different ambition is given by A. N. Wilson in his 2003 book Iris Murdoch as I Knew Her. The work was described by Galen Strawson in The Guardian as "mischievously revelatory" and labelled by Wilson himself as an "anti-biography". It eschews Conradi's objectivity, but is careful to stress his current and past affection for his subject. Wilson remarks that Murdoch "had clearly been one of those delightful young women... who was prepared to go to bed with almost anyone". A central difference is that while Murdoch's thought is for Conradi an inspiration to his "Going Buddhist", Wilson treats Murdoch's philosophical work as at best a distraction. In a BBC Radio 4 discussion of Murdoch and her work in 2009, Wilson assented to Bidisha's view that Murdoch's philosophical output consisted of nothing but "GCSE-style" essays on Plato, and even suggested that Murdoch's later philosophical work "Metaphysics as a Guide to Morals" was a mistake that precipitated Murdoch into Alzheimers. This would be the area of difference between Wilson and Conradi. This dispute between two literary figures about the status of Murdoch's philosophical contribution has some life also among professional philosophers.

The aspect of memoir in Wilson's "anti-biography" is developed in David Morgan's With Love and Rage: A Friendship with Iris Murdoch (Kingston University Press 2010). Morgan is as direct and subjective about Murdoch as is Wilson.

Murdoch was portrayed by Kate Winslet and Judi Dench in Richard Eyre's film Iris (2001), based on Bayley's memories of his wife as she developed Alzheimer's disease. Parts of the movie were filmed at Southwold in Suffolk, one of Murdoch's favourite holiday places.