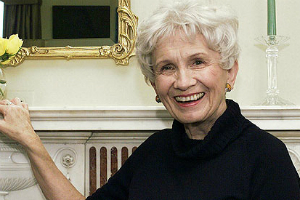 Alice Ann Munro (born 10 July 1931) is a Canadian author. The winner of the 2009 Man Booker International Prize for her lifetime body of work, she is also a three-time winner of Canada's Governor General's Award for fiction, and a perennial contender for the Nobel Prize. The locus of Munro’s fiction is her native southwestern Ontario. Her "accessible, moving stories" explore human complexities in a seemingly effortless style. Munro's writing has established her as "one of our greatest contemporary writers of fiction," or, as Cynthia Ozick put it, "our Chekhov."

Munro was born in the town of Wingham, Ontario. Her father, Robert Eric Laidlaw, was a fox and poultry farmer, and her mother, Anne Clarke Laidlaw (née Chamney), was a schoolteacher. Munro began writing as a teenager, publishing her first story, "The Dimensions of a Shadow," in 1950 while a student at the University of Western Ontario. During this period she worked as a waitress, a tobacco picker, and a library clerk. In 1951, she left the university, where she had been majoring in English since 1949, to marry James Munro and move to Vancouver, British Columbia. Her daughters Sheila, Catherine, and Jenny were born in 1953, 1955, and 1957 respectively; Catherine died 15 hours after birth. In 1963, the Munros moved to Victoria where they opened Munro's Books, a popular bookstore still in business. In 1966, their daughter Andrea was born. Alice and James Munro were divorced in 1972. She returned to Ontario to become Writer-in-Residence at the University of Western Ontario. In 1976 she married Gerald Fremlin, a geographer. The couple moved to a farm outside Clinton, Ontario, and later to a house in Clinton, where Fremlin died in April 2013.

Munro's highly acclaimed first collection of stories, Dance of the Happy Shades (1968), won the Governor General's Award, Canada’s highest literary prize. That success was followed by Lives of Girls and Women (1971), a collection of interlinked stories sometimes erroneously described as a novel. In 1978, Munro's collection of interlinked stories Who Do You Think You Are? was published (titled The Beggar Maid: Stories of Flo and Rose in the United States). This book earned Munro a second Governor General’s Literary Award. From 1979 to 1982, she toured Australia, China and Scandinavia. In 1980 Munro held the position of Writer-in-Residence at both the University of British Columbia and the University of Queensland. Through the 1980s and 1990s, she published a short-story collection about once every four years. In 2002, her daughter Sheila Munro published a childhood memoir, Lives of Mothers and Daughters: Growing Up With Alice Munro.

Alice Munro's stories frequently appear in publications such as The New Yorker, The Atlantic Monthly, Grand Street, Mademoiselle, and The Paris Review. In interviews to promote her 2006 collection The View from Castle Rock, Munro suggested that she might not publish any further collections. She has since recanted and published further work. Her collection, Too Much Happiness, was published in August 2009. Her story "The Bear Came Over the Mountain" was adapted for the screen and directed by Sarah Polley as the film Away from Her, starring Julie Christie and Gordon Pinsent. It debuted at the 2006 Toronto International Film Festival. Polley's adaptation was nominated for an Academy Award for Best Adapted Screenplay, but lost to No Country for Old Men.

At a Toronto appearance in October 2009, Munro indicated that she received treatment for cancer and a heart condition, the latter requiring bypass surgery. At that time, she indicated that her next work would involve a theme of sexual ambivalence.

Many of Munro's stories are set in Huron County, Ontario. Her strong regional focus is one of the features of her fiction. Another is the omniscient narrator who serves to make sense of the world. Many compare Munro's small-town settings to writers of the U.S. rural South. Her female characters, though, are more complex. Much of Munro's work exemplifies the literary genre known as Southern Ontario Gothic.

Munro's work is often compared with the great short story writers. In Munro stories, as in Chekhov's, plot is secondary and "little happens." As with Chekhov, Garan Holcombe notes: "All is based on the epiphanic moment, the sudden enlightenment, the concise, subtle, revelatory detail." Munro's work deals with "love and work, and the failings of both. She shares Chekhov’s obsession with time and our much-lamented inability to delay or prevent its relentless movement forward."

A frequent theme of her work—particularly evident in her early stories—has been the dilemmas of a girl coming of age and coming to terms with her family and the small town she grew up in. In recent work such as Hateship, Friendship, Courtship, Loveship, Marriage (2001) and Runaway (2004) she has shifted her focus to the travails of middle age, of women alone and of the elderly. It is a mark of her style for characters to experience a revelation that sheds light on, and gives meaning to, an event.

Munro's prose reveals the ambiguities of life: "ironic and serious at the same time," "mottoes of godliness and honor and flaming bigotry," "special, useless knowledge," "tones of shrill and happy outrage," "the bad taste, the heartlessness, the joy of it." Her style places the fantastic next to the ordinary with each undercutting the other in ways that simply, and effortlessly, evoke life. As Robert Thacker notes: "Munro's writing creates ... an empathetic union among readers, critics most apparent among them. We are drawn to her writing by its verisimilitude—not of mimesis, so-called and... 'realism'—but rather the feeling of being itself... of just being a human being." Many critics have asserted that Munro's stories often have the emotional and literary depth of novels. The question of whether Munro actually writes short-stories or novels has often been asked. Alex Keegan, writing in Eclectica, has a simple answer: "Who cares? In most Munro stories there is as much as in many novels."