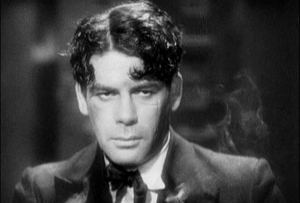 He was born Meshilem Meier Weisenfreund to a Jewish family in Lemberg, Galicia, a province of the Austro-Hungarian Empire, now Lviv, Ukraine.

His family emigrated to the United States in 1902. Both of Muni's parents were actors with the Yiddish theatre. He made his stage debut at age 12. During his time in Yiddish theater, he was known as Moony Weisenfreund (Moonie is a common Yiddish name). He was quickly recognized by Maurice Schwartz, who signed him up with his Yiddish Art Theater. Edward G. Robinson and Paul Muni were cousins to Charles M. Fritz who was a notable actor and manager of The Little Red Theater in Northport, New York, during the Great Depression.

A 1925 New York Times article singled out his and Sam Kasten's performances at the People's Theater as among the highlights of that year's Yiddish theater season, describing them as second only to Ludwig Satz.

Muni began acting on Broadway in 1926. His first role, that of an elderly Jewish man in the play We Americans, was written by playwrights Max Siegel and Milton Herbert Gropper; it was also the first time that he ever acted in English. He was signed by Fox three years later, in 1929, and received an Oscar nomination for his first film The Valiant. However, he was unhappy with the roles and decided to return to Broadway.

In 1932, Paul Muni returned to Hollywood to star in such harrowing pre-Code films as the original Scarface and I Am a Fugitive from a Chain Gang. The acclaim that Muni received as a result of this performance led Warner Brothers Studios to sign a long-term contract with him. He received his second Oscar nomination for Best Actor for his performance as James Allen, but lost to Charles Laughton (The Private Life of Henry VIII). Muni eventually won a long-overdue Oscar for his performance in the biographical drama The Story of Louis Pasteur. In 1946 Muni appeared on Broadway in A Flag is Born, refusing, along with co-stars Celia Adler and Marlon Brando, to accept compensation above the Actor's Equity minimum wage because of his commitment to the cause of creating a Jewish State in Israel.

Muni was nominated for a total of five Academy Awards, an impressive number by any standard but all the more remarkable for Muni since he only appeared in twenty-five films throughout his career. His other nominations may be seen in the table below. Some sources list Muni as a nominee for 'Best Actor' for the film Black Fury, but this is erroneous: Muni was actually a write-in candidate.

Film critic David Shipman called Muni "an actor of great integrity" and he prepared for his roles meticulously. Muni was widely recognized as an eccentric if talented individual. He would go into a rage whenever anyone wore red, but at the same time he could often be found between sessions relaxing with his violin. Over the years, he also became increasingly dependent on his wife, Bella, who terrified directors by forcing them to redo scenes that did not meet her satisfaction.

A dispute with Warner Bros. led to the termination of Muni's contract, the result of which was stardom for Humphrey Bogart. Bogart had been bombarding studio head Jack Warner with telegrams, begging to be cast as Roy Earle in the film High Sierra, a part that was supposed to have been played by Muni. But after Muni's departure from the studio, Warner told Bogart that the part was his (according to rumor, he made the offer on condition that Bogart stop sending him telegrams). After reigning as one of the biggest stars in Hollywood during the 1930s, Muni only made eight films between 1941 and 1959 (including a guest appearance as himself in the 1943 film Stage Door Canteen).

After several failed projects, Muni made a triumphant return to Broadway, winning a Tony Award in 1956 for the role of Henry Drummond in the play Inherit the Wind.

He retired from filmmaking in 1959, soon after receiving his fifth Academy Award nomination for The Last Angry Man; however, he made a final television appearance in the series Saints and Sinners in 1962. Muni died in Montecito, California in 1967 at the age of 71. Muni died the same year as his Angel On My Shoulder co-star Claude Rains.

He has a star on the Hollywood Walk of Fame at 6435 Hollywood Blvd.

In the fourth-season M*A*S*H episode "Hawkeye", Hawkeye Pierce describes his childhood in the 1930s and Muni's ubiquitous film appearances thus: "You knew where you stood in those days. Roosevelt was always president, Joe Louis was always the champ, and Paul Muni played everybody."