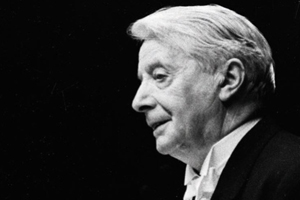 Noted for his mastery of the French orchestral repertoire, he is best known as music director of the Boston Symphony Orchestra.

Munch was born in Strasbourg, Alsace-Lorraine, German Empire (now France, since 1919). The son of organist and choir director Ernst Münch, he was the fifth in a family of six children. He was the brother of conductor Fritz Münch and the cousin of conductor and composer Hans Münch. Although his first ambition was to be a locomotive engineer, he studied violin at the Strasbourg Conservatoire. His father Ernst was a professor of organ at the Conservatoire and performed at the cathedral; he also directed an orchestra with his son Charles in the second violins.

After receiving his diploma in 1912, Charles studied with Carl Flesch in Berlin and Lucien Capet at the Conservatoire de Paris. He was conscripted into the German army in World War I, serving as a sergeant gunner. He was gassed at Péronne and wounded at Verdun.

At the age of 41, Munch made his conducting debut in Paris on 1 November 1932. Munch's fiancée, Geneviève Maury, granddaughter of a founder of the Nestlé Chocolate Company, rented the hall and hired the Walther Straram Concerts Orchestra. She was also an accomplished translator of Thomas Mann. Munch also studied conducting with Czech conductor Fritz Zweig who had fled Berlin during his tenure at Berlin's Krolloper.

Following this success, he conducted the Concerts Siohan, the Lamoureux Orchestra, the new Orchestre Symphonique de Paris, the Biarritz Orchestra (Summer 1933), the Société Philharmonique de Paris (1935 to 1938), and the Orchestre de la Société des Concerts du Conservatoire (1937 to 1946). He became known as a champion of Hector Berlioz, and befriended Arthur Honegger, Albert Roussel, and Francis Poulenc. During these years, Munch gave first performances of works by Honegger, Jean Roger-Ducasse, Joseph Guy Ropartz, Roussel, and Florent Schmitt. He became director of the Société Philharmonique de Paris in 1938 and taught conducting at the Conservatoire de Paris from 1937 to 1945.

He remained in France conducting the Conservatoire Orchestra during the German occupation, believing it best to maintain the morale of the French people. He refused conducting engagements in Germany and also refused to perform contemporary German works. He protected members of his orchestra from the Gestapo and contributed from his income to the French Resistance. For this, he received the Légion d'honneur with the red ribbon in 1945 and the degree of Commandeur in 1952.

Munch made his début with the Boston Symphony Orchestra on 27 December 1946. He was its Music Director from 1949 to 1962. Munch was also Director of the Berkshire Music Festival and Berkshire Music Center (Tanglewood) from 1951 through 1962. He led relaxed rehearsals which orchestra members appreciated after the authoritarian Serge Koussevitzky. Munch also received honorary degrees from Boston College, Boston University, Brandeis University, Harvard University, and the New England Conservatory of Music.

He excelled in the modern French repertoire, especially Claude Debussy and Maurice Ravel, and was considered to be an authoritative performer of Hector Berlioz. However, Munch's programs also regularly featured works by composers such as Bach, Haydn, Mozart, Beethoven, Schubert, Schumann, Brahms, and Wagner. His thirteen-year tenure in Boston included 39 world premieres and 58 American first performances, and offered audiences 168 contemporary works. Fourteen of these premieres were works commissioned by the Boston Symphony and the Koussevitzky Music Foundation to celebrate the Orchestra's 75th Anniversary in 1956. (A 15th commission was never completed.)

Munch invited former Boston Symphony music director Pierre Monteux to guest conduct, record, and tour with the orchestra after an absence of more than 25 years. Under Munch, guest conductors became an integral part of the Boston Symphony's programming, both in Boston and at Tanglewood.

Munch led the Boston Symphony on its first transcontinental tour of the United States in 1953. He became the first conductor to take them on tour overseas: Europe in 1952 and 1956, and East Asia and Australia in 1960. During the 1956 tour, the Boston Symphony was the first American orchestra to perform in the Soviet Union.

The Boston Symphony under Munch made a series of recordings for RCA Victor from 1949 to 1953 in monaural sound and from 1954 to 1962 in both monaural and stereophonic versions.

Munch returned to France and in 1963 became president of the École Normale de Musique. He was also named president of the Guilde Française des Artistes Solistes. During the 1960s, Munch appeared regularly as a guest conductor throughout America, Europe, and Japan. In 1967, at the request of France's Minister of Culture, André Malraux, he founded the first full-time salaried French orchestra, the Orchestre de Paris, and conducted its first concert on 14 November 1967. The following year, he died of a heart attack suffered at his hotel in Richmond, Virginia while on an American tour with his new orchestra. His remains were returned to France where he is buried in the Cimetière de Louveciennes. EMI recorded his final sessions, including Ravel's Piano Concerto in G, with this orchestra, and released them posthumously.

In 1955, Oxford University Press published I Am a Conductor by Munch in a translation by Leonard Burkat. It was originally issued in 1954 in French as Je suis chef d'orchestre. The work is a collection of Munch's thoughts on conducting and the role of a conductor.

Munch's discography is extensive, both in Boston on RCA Victor and at his various European posts and guest conducting assignments on various labels, including English Decca, EMI, Nonesuch, Erato and Auvidis-Valois.

He began making records in Paris before the war, for EMI. Munch then made a renowned series of Decca Full Frequency Range Recordings (FFRR) in the late 1940s. After several recordings with the New York Philharmonic for Columbia, Munch began making recordings for RCA Victor soon after his arrival in Boston as Music Director. These included memorable Berlioz, Honegger, Roussel, and Saint-Saëns tapings.

His first stereophonic recording with the Boston Symphony, in Boston's Symphony Hall in February 1954, was devoted to a complete version of The Damnation of Faust by Hector Berlioz and was made simultaneously in monaural and experimental stereophonic sound, although only the complete score was released in monaural version. The stereo tape survives only fragmentarily. The monaural version of this recording was added to the Library of Congress's national registry of sound. Among his final recordings in Boston was a 1962 performance of César Franck's symphonic poem Le chasseur maudit.

A number of Munch's recordings have been available continuously since their original releases, among them Saint-Saëns's Organ Symphony and Ravel's Daphnis and Chloe. RCA reissued Munch Conducts Berlioz in a multi-disc set, including all of their Munch recordings. BMG/Japan has issued two different editions of Munch's recordings on CD, 1998 and 2006. The latter was made up of 41 CDs and encompassed all but a handful of Munch recordings with the Boston Symphony. It made available a number of recordings from the first ten years of Munch's tenure in Boston for the first time in more than 50 years.

The Boston Symphony appeared on television with Munch locally on WGBH-TV, Boston, and nationally through a syndicated series. NHK broadcast throughout Japan the opening concert of the Boston Symphony's tour of Japan in 1960. Munch also appeared on film or television with the Chicago Symphony Orchestra, the Czech Philharmonic, the Hungarian Radio and Television Orchestra, the Orchestre National de l'ORTF, and the Orchestre de Radio-Canada. Several of these performances have been issued on DVD.