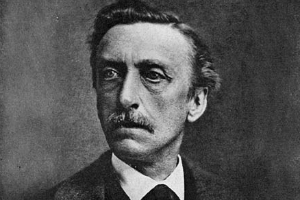 Dutch poet, aphorist and great writer, famous for his frame story “Max Havelaar” that decried the Dutch colonialism of Indonesia.

His adopted name Multatuli, Latin for “I have carried or suffered much” retrieved from Horatio was since 24 September 1859 the adopted pen name of Eduard Douwes Dekker, who actually was born as Eduard Dekker in Amsterdam in a Baptist family. His book “De geschiedenis van Woutertje Pieterse” partly describes his youth in Amsterdam and his loosely handed moody mother who considered the Sun in Piscus born Eduard as a softy: “God heeft zich met Eduard vergist”.. “hij had beter een meisje kunnen zijn..” (God was wrong in Eduard, he better could have been born as a girl). But to prove the contrary and to attain his mothers attention he acted aggressively and capriciously wrote his biographer and prominent Dutch 20th century writer W.F. Hermans.

His father, the robust sea captain Engel “Douwes” Dekker (3 Sept 1787, Oostzaandam - 25 July 1850, Amsterdam) used the surnames of both his father Pieter Douwesz and his mother Engeltje Dekker. As a sea captain he was abroad a lot. His nervous mother Sietske Eeltjes Klijn (1782, Hollum - 5 May 1846, Amsterdam) was born on the North Sea Isle of Ameland. They married 13 November 1808 in Ballum, Ameland and got six children that were as far as possible "well raised" by his lower middle-class mother:

Eduard was a very intelligent child, but was also impulsive, easily distractable and difficult to handle. He went to the Latin school of Amsterdam, the predecessor of the Barlaeus Gymnasium. He asked critical questions about faith, wrote his first poetry, but was send away from school by his father after 2-3 years without diploma because of disappointing results. Today we would diagnose his lifelong hyperactive impulsive behaviour as typical of Attention Deficit Hyperactivity Disorder. But at those times there was no medical remedy for it. His father arranged for him an insignificant job as courier of a textile company till age 18. But he enjoyed the freedom and his walks through the city of Amsterdam were described in his later literary work.

On 23 September 1838 he went on board of the "Dorothea" to sail to the Dutch East Indies. His father was the captain and his brother Jan the second chief mate. After 13 weeks they arrived in Batavia, now Jakarta. Here he took a job as a civil servant. He made a steady career and was called “the eccentric Lord” with not so Christian habits like duelling, gambling and spending a lot of money. In 1841 he fell in love with the Catholic Carolina Johanna Versteegh (11 June 1821 - 7 April 1864, Utrecht), was baptised Catholic on 28 August 1841, but was not allowed to marry her (24 Aug 1842). Her father distrusted his aristocratic lifestyle. He got depressed. 12 October 1842 he moved to Padang to become a civil servant under the governor colonel Andreas Victor Michiels (30 May 1797- 25 May 1849). The ship wrecked for the coast and he arrived swimming on the shore. He got a lot of responsibilities in his early twenties like speaking right. In 1843 Michiels accused him to be responsible for a cash deficit of 2000 guilders. He got no salary and was suspended. He wrote “De eerloze” (the infamous). After an investigation that took a year he was spoken free and was called back to Batavia as the relation with Michiels was spoiled. During the following posts like that if assistant-resident at Ambon (1851), Lebak (1857), he learned all the secrets of the colonial Dutch administration and started an open protest against the abuses of the colonial system. He was threatened with dismissal, without any help voluntarily resigned 29 March 1856 from office and returned to the Netherlands without his wife and son Edu and wandered desperately around in Holland, Belgium and Germany.

He got inspiration from the poem "Nathan der Weise" (1779) of Gotthold Ephraim Lessing, that deals with the theme of social injustice. His "Barbertje moet hangen" became a Dutch expression: Somebody has to be blamed. Between 6 September en 13 Oktober 1859 he wrote in pension "Au Prince Belge" in Brussel “Max Havelaar, of De koffij-veilingen der Nederlandsche Handel-Maatschappij. ” (Max Havelaar: Or the Coffee Auctions of the Dutch Trading Company). He send the manuscript to a free mason friend of the "Concordia Vincit Animos" lodge. End November it was read by the jurist and writer Jacob van Lennep who was very impressed. Being desperate and poor Multatuli sold the copy rights. In May 1860 the book was published in Amsterdam and sold for the extremely high prize of 4 guilders so that it became only affordable to the rich upper class. Names of persons and places were changed by Van Lennep, and it was not available in Indonesia. Multatuli protested without success as intellectual authorship was not enough protected then. Nevertheless, Dekker in short time became a famous man and his book got the attention of the Dutch Parliament.

In 1866 Multatuli moved to Wiesbaden, Germany. It was a essentially a flight for Dutch justice as he was shortly before accused of fighting in an Den Haag theatre. The Germany of poets like Lessing and Goethe became his second homeland. He died at age 66 on 19 February 1887 in Nieder-Ingelheim. He was probably the first Dutchman to be cremated, which happened two weeks later in Gotha, Germany. His now empty urn is kept at Multatuli Museum, but his ashes are laid down in the burial place Westerveld.

In June 2002 his frame story “Max Havelaar” was elected as the most important Dutch literary accomplishment of all times by the Maatschappij der Nederlandse Letterkunde. His birthplace at the Korsjespoortsteeg 20, Amsterdam hosts the Multatuli Museum.

Max Havelaar is the name of brand that sells Fair Trade coffee since 15 November 1988.