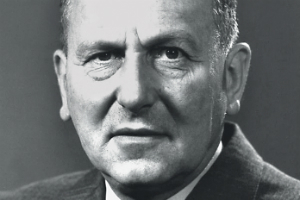 Swiss chemist who received the Nobel Prize for Medicine in 1948 for determining the potent toxic effects of dichlorodiphenyltrichloroethane (DDT) on insects. Müller’s discovery was instrumental in increasing food production around the world and suppressing insect-borne diseases.

Born at Olten, Solothurn, Switzerland, he spent his early childhood at Lenzburg, Aargau, where his father worked for the Swiss Federal Railway. The family later moved to Basel where he attended primary, elementary and secondary school. In 1916, Müller became a laboratory assistant at Dreyfus and Company, and the following year, he was made assistant chemist for the Scientific-Industrial Laboratory. He returned to school in 1919 and obtained his diploma, and in 1925, he earned his Doctorate from the University of Basel.

In May 1925, Müller became a research chemist for the J. R. Geigy Company, investigating tanning agents and dyes before beginning the search for the "ideal" insecticide later that same year. In 1946, he was made Deputy Director of Scientific Research on Substances for Plant Protection.