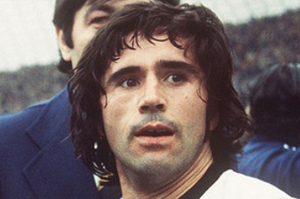 Gerd Müller (born November 3, 1945 in Nördlingen) is a former (West) German football player and one of the world's most prolific goalscorers of all time.

With national records of 68 goals in 62 international appearances, 365 goals in 427 Bundesliga games and the international record of 66 goals in 74 European Club games, he was by far the most successful striker of his day. Only Josef Bican, Romário and Pelé are higher on the all-time goalscorer ranking. His nicknames are “Bomber der Nation” (the nation's Bomber) and “kleines dickes Müller” (short fat Müller, declension intentionally wrong).

In 1970 Müller was elected European Footballer of the Year after a successful season at Bayern Munich and scoring 10 goals at the 1970 FIFA World Cup.

Bayern Munich
Born in Nördlingen, Germany, he began his football career at the TSV 1861 Nördlingen. Müller joined FC Bayern Munich in 1964 where he teamed up with future stars Franz Beckenbauer and Sepp Maier. The club, which would go on to become the most successful German club in history was then still in the Regionalliga Süd (Regional League South), which was one level below the Bundesliga at the time. After one season, Bayern Munich advanced to the Bundesliga and started a long string of successes. With his club, Müller amassed titles during the 60s and 70s: He won the German Championship four times, the German Cup four times, the European Champions' Cup three times, the Intercontinental Cup once, and the European Cup Winners’ Cup once. A supremely opportunistic goal-scorer, he also became German top scorer seven times and European top scorer twice. Müller scored 365 goals in 427 Bundesliga matches for Bayern Munich, almost 100 goals more than the second most successful Bundesliga scorer, Klaus Fischer. He holds the single-season Bundesliga record with 40 Goals in season 1971/72 (18 goals more than second ranked player Klaus Fischer). He scored 78 goals in 62 German Cup games. His 66 goals in his 74 appearances at European cups are still a record. He is also one of the very few players of 50 or more caps to score more goals than he has games played. Not even Pelé can claim this distinction.

National team
Müller scored 68 goals in 62 games for West Germany. His international career started in 1966 and ended on July 7, 1974 with the win of the World Cup at his home stadium in Munich. He scored the winning goal for the 2-1 victory over the Netherlands in the final. His four goals in that tournament and his ten goals at the 1970 FIFA World Cup combined made him the all-time highest FIFA World Cup goalscorer overall at the time with 14 goals; his record stood until the 2006 tournament, coincidentally held in Germany, when it was broken by Brazilian forward Ronaldo on June 27, 2006 playing against Ghana; As of the end of the 2006 tournament, Ronaldo has scored 15 goals in three World Cups. Müller also participated in the 1972 European Championship, becoming top scorer with four goals and winning the Championship with the German team.

Fort Lauderdale Strikers
After his career in the Bundesliga he went to the U.S., where he joined the Fort Lauderdale Strikers of the North American Soccer League in 1979. He played three seasons with this team, scoring 38 goals, and once reaching, but losing, the league final in 1980. He was a 2nd-team NASL All Star in 1979.

Life after football
After Müller ended his career in 1982, he fell into a slump and suffered from alcoholism. However, his former companions at Bayern Munich convinced him to go through alcohol rehabilitation. When he emerged, they gave him a job as an amateur coach at Bayern Munich, where he still works as of 2007. There is also a collection of apparel released by sporting giants Adidas under the Gerd Müller name. It is part of the adidas originals series.

Playing style
Müller was short, squat, awkward-looking and not notably fast; he never fit the conventional idea of a great footballer, but he had lethal acceleration over short distances, a remarkable aerial game, and uncanny goalscoring instincts. His short legs gave him a strangely low center of gravity, so he could turn quickly and with perfect balance in spaces and at speeds that would cause other players to fall over. He also had a knack of scoring in unlikely situations.