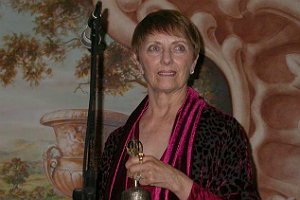 American second generation astrologer and metaphysician who is the co-founder of SWAC, a regional conference for astrologers. and from 1974-1985, its director. She served as President of ISAR in 1986 and, in 1995, was named the ISAR Archives Director.

Roxana is the author of "A Year-At-A-Glance," and "The Fourth Sign" as well as many articles on astrology and metaphysics, coining the phrase "shadow points. She was ordained in the Abundant Life Church in 1974 and served, for 21 years, as a counseling minister, until 1995.

As a founding member of the board of trustees of Kepler College, she is noted as a conference organizer. Throughout her life she has studied the mantic and symbolic arts, such as tarot, I Ching and numerology, beginning her astrology study in 1968 with her mother, Pat Crossley. In 1981 she graduated with a B.S. degree in Health Science, with honors, from Cal State Dominguez Hills.