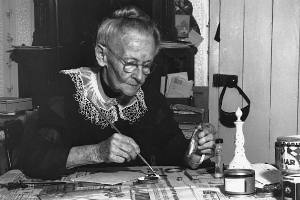 Anna Mary Robertson Moses (September 7, 1860 – December 13, 1961), better known as "Grandma Moses", was a renowned American folk artist. She is often cited as an example of an individual successfully beginning a career in the arts at an advanced age. Her family and friends called her either "Mother Moses" or "Grandma Moses", and although she first exhibited as "Mrs. Moses", the press eagerly dubbed her "Grandma Moses", which stuck. LIFE magazine celebrated her 100th birthday by featuring her on its September 19, 1960 cover.

Grandma Moses' paintings were used to publicize numerous American holidays, including Thanksgiving, Christmas and Mother's Day. Exemplary of her status, a Mother's Day Feature in True Confessions (1947) noted how "Grandma Moses remains prouder of her preserves than of her paintings, and proudest of all of her four children, eleven grandchildren and four great-grandchildren."

During the 1950s, Grandma Moses' exhibitions were so popular that they broke attendance records all over the world. "A cultural icon, the spry, productive nonagenarian was continually cited as an inspiration for housewives, widows and retirees. Her images of America's rural past were transferred to curtains, dresses, cookie jars, and dinner ware, and used to pitch cigarettes, cameras, lipstick and instant coffee."

In 1950, the National Press Club cited her as one of the five most newsworthy women and the National Association of House Dress Manufacturers honored her as their 1951 Woman of the Year. At age 88, Mademoiselle magazine named Grandma Moses a “Young Woman of the Year”. Philadelphia’s Moore College of Art awarded her its first honorary doctorate degree. Due to a lingering cold, she received the degree in absentia, presenting her acceptance speech via a special telephone hookup.

Anna Mary Robertson was born on September 7, 1860, on a farm in Greenwich, upstate New York, one of a family of 10 children. In 1887, at the age of 27, she married a "hired man", Thomas Salmon Moses, and the couple established themselves on a farm in Virginia where they spent nearly two decades. During this time she gave birth to 10 children, five of whom died in infancy. In 1905, the couple returned to New York and settled in Eagle Bridge, not far from Anna Mary's birthplace. In 1927 her husband Thomas died but she continued to farm with the help of her youngest son until advancing age forced her to retire to a daughter's home in 1936.

Often, during her younger days as a wife and mother, she had been creative in her home by, for example, using housepaint to decorate a fireboard—but her earliest works used embroidery rather than paint. Her embroidered pictures were much admired by friends and relatives, so when arthritis eventually made it painful to wield a needle, her sister suggested that it might be easier to paint—the pivotal suggestion that spurred her painting career in her late 70s.

According to art historian Judith Stein, Grandma Moses was "practical at heart, turning to painting in her seventies after working with worsted wools for embroidered compositions", which risked being eaten by moths. She painted mostly scenes of rural life. Others have noted that she abandoned a career in embroidery because of arthritis. Grandma Moses told reporters that she turned to painting in order to create the postman's Christmas gift, seeing as it "was easier to make a painting than to bake a cake over a hot stove." Stein notes that "her sense of accomplishment in her painting was rooted in her ability to make 'something from nothing', as Lucy Lippard defined the aesthetics of women's 'hobby art' in 1978." Stein considers Moses' quilting work, for which she transformed cloth scraps into useful and beautiful objects, akin to hobby art.

Her early style is less individual and more realistic (also known as primitive art), despite her lack of knowledge of (or perhaps rejection of) basic perspective. She did not develop her immediately recognizable signature folk style until later. Many of her early paintings in the realist style were given to family members as thank-you gifts after her visits. She was a prolific painter, generating over 1600 canvasses in three decades. Before her fame, she would charge $2 for a small painting and $3 for a large. Her winter paintings are reminiscent of some of the known winter paintings of Pieter Bruegel, the Elder, such as The Hunters in the Snow and Winter Landscape with a Bird Trap.

In 1938 a New York engineer and art collector, Louis J. Caldor, who was driving through Hoosick Falls, saw some of her paintings displayed in a drug store window. They were priced from $3 to $5, depending on size. He bought them all, drove to the artist's home at Eagle Bridge and bought ten others she had there. The next year, three Grandma Moses paintings were included in "Contemporary Unknown American Painters" at the Museum of Modern Art in New York. She did not remain unknown for long. Her first solo exhibition, "What a Farm Wife Painted", opened October 1940 at Otto Kallir's New York City gallery, Galerie St. Etienne, followed by a meet-and-greet with the artist and an exhibition of 50 paintings at Gimbel's Department Store November 15, followed by a third solo show in as many months, at the Whyte Gallery, Washington, D.C. "Gimbels had supplemented Moses' art display with a table beneath the paintings spread with samples of Grandma's culinary talents—homebaked bread, rolls and cake, plus some of the preserves which won her prizes at the county fair." This brought her to the attention of collectors all over the world, and her paintings became highly sought after. After her death, large traveling exhibitions circulated throughout Europe and Japan, where her work was particularly well received.

The Bennington Museum in Bennington, Vermont, holds the largest public collection of Moses' paintings in the country, as well as "Yarn paintings", art supplies, and the 18th century tilt-top table Moses painted with rustic scenes and used as her easel.

Her paintings were soon reproduced on Christmas cards, tiles and fabrics in America and abroad. In 1946 her painting The Old Checkered Inn in Summer was featured in the background of a national advertising campaign for the young women's lip gloss Primitive Red by Du Barry cosmetics. President Harry S. Truman presented her with the Women's National Press Club trophy Award for outstanding accomplishment in art in 1949, and in 1951 she appeared on See It Now, a television program hosted by Edward R. Murrow. The "See It Now" segment on Grandma Moses, presently available on DVD in "The Edward R. Murrow Collection", unfortunately contains but one-third of the actual 25-minute produced interview. In 1952 she published her autobiography and titled it Grandma Moses: My Life's History.

On her 100th birthday in 1960, New York Governor Nelson Rockefeller proclaimed the day "Grandma Moses Day" in her honor.

In November 2006, her work Sugaring Off (1943), became her highest selling work at US $1.2 million. The work was a clear example of the simple rural scenes for which she was well-known.

A 1942 piece, The Old Checkered House, 1862 was appraised at the Memphis 2004 Antiques Roadshow. The painting was a summer scene in Geneva, New York, not as common as her winter landscapes. Originally purchased in the 1940s for under $10, the piece was assigned an insurance value of $60,000 by the appraiser, Alan Fausel.

Another of her paintings, Fourth of July, was given by Otto Kallir to the White House and still hangs there today.

The character Granny on the popular 1960s rural comedy television series The Beverly Hillbillies was named Daisy Moses as an homage to Grandma Moses, who died shortly before the series began. She is buried in Hoosick Falls, New York.

Norman Rockwell, who, for a time, lived in New Carlisle, Indiana, was a friend of Grandma Moses who lived in nearby Eagle Bridge, New York. Grandma Moses also appears on the far left edge in the Norman Rockwell painting Christmas Homecoming, which was printed on the cover of the Saturday Evening Post of December 25, 1948.

A U.S. commemorative stamp was issued in her honor in 1969.

Mount Airy near Verona, Virginia was listed on the National Register of Historic Places in 2012. It was the first house Grandma Moses and her husband owned in their married lives. They owned the house from January 1901 to September 1902.