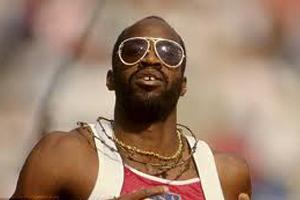 American athlete known as the greatest 400 meter hurdler in track history. He won Olympic Gold Medals in 1976 and 1984 and a Bonze Medal in 1978, and was the winner of 122 consecutive races between 1977 and 1987. Moses and long jumper Carl Lewis are considered the highest paid track athletes in the world.

Moses is one of three sons of Irving, an elementary school principal, and Gladys, a curriculum advisor to city school systems of Dayton, Ohio. Despite the athletic ability of their sons, educational excellence came first in the Moses household. The boys were allowed to play if they had good grades. Moses competed in the long jump in high school but spent more of his time on academics than training for track and field. "I had no ambitions to be an Olympic track star or any kind of athlete," he said. Winning a scholarship to Morehouse College in Atlanta, GA, Moses competed for two years in 400 meters and 110 meters in a school that had a track team but no track. "I studied physics in college and used what I learned in terms of dynamics and mechanics to help me with technique, to break down the motion of my body." Before graduating with a degree in physics and engineering, he tried for the US Olympic team in 1976 in 400 meter hurdles. "Let's put it this way, it's not an event you have guys volunteering for. The 400 is tough enough - but when you're running hurdles, it's that much tougher." He won his first Gold Medal at the Olympic's in Montreal in 1976 and his second in Los Angeles August 1984 for the fastest race over 10 hurdles.

By 1980 the fair playing Moses openly challenged the hypocrisy of rules that prohibited amateur athletes from accepting money for competitions and endorsements. "Everybody used to line up in the back room after the meet and the promoter would pay out cash. There were a lot of people making money, and it wasn't U.S. athletes." He lobbied the International Amateur Athletic Federation for permission for athletes to keep endorsement fees and winnings in a trust fund. The fund could be drawn on for certain expenses, leaving the balance for their withdrawal when they left amateur athletics.

Moses claims that track and field have become a business. He established Edwin Moses Enterprises and earned over $450,000 in 1983. Employing a coach and engineers, he and his colleagues collectively analyze his movements on computers. Yet not everything is strictly business. On the night of 8/30/1983 the vision of a series of numbers appeared in Moses' dream. Those numbers were 8-31-83 and 47.03. The meanings of these numbers were revealed in all their glory the following day, 8/31/1983, Moses 28th birthday, when he set a new world record at Koblenz, West Germany, in the 400 meter hurdles with a time of 47.02. "I don't often dream about those things. But I felt I was going to run a world record."

Moses married German born artist Myrella Bordt on 5/31/1980 and they made their home in Laguna Hills, CA. He and Myrella separated in 1992.

Moses later became an engineer with General Dynamics. In May 1981, he got his private pilot's license.