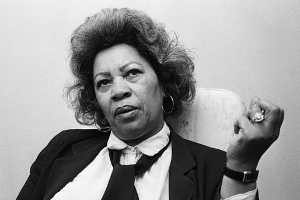 Morrison was the second of four kids born to one-time sharecroppers George and Rama (Willis) Wofford and grew up in the working class mill town of Lorain, Ohio. During the hard times of the Depression, her dad worked as a car washer, a welder, and construction worker while feisty mom wrote letters to President Roosevelt about the maggots she found in her flour. "My mother believed something should be done about inhuman situations." After graduating with honors from Lorain High School in 1949, Morrison attended the all-black Howard University where she changed her name to Toni. She performed with a theater repertory troupe during the summers that was made up of faculty members and students. Earning a Bachelor's Degree in English in 1953, Morrison moved on to Cornell University for a Master's Degree in 1955 and, after a two year teaching stint in Texas, returned to Howard as a faculty member, an instructor in English. At Howard she met and married Jamaican architect Harold Morrison and gave birth to two sons, Harold Ford and Slade Kevin.

Disillusioned with marriage, as an escape, Morrison began to write fiction in the early '60s. "It was though I had nothing left but my imagination. I had no will, no judgment, no perspective , no power, no authority, no self; just this brutal sense of irony, melancholy and a trembling respect for words. I wrote like someone with a dirty habit. Secretly. Compulsively. Slyly."

After divorcing her husband and resigning from Howard, Morrison moved with her sons to Syracuse, NY where she worked as a textbook editor for Random House. Battling her loneliness she once again sought escape in the fiction she began writing while teaching at Howard and developed the short story she had written there into a novel. The unfinished manuscript became her first publication, "The Bluest Eye," 1970. By 1977 she was the winner of the National Book Critics Circle Award for "The Song of Solomon." Over the next ten years, Morrison taught sporadically at The State University at Albany, Bard College, Yale and Rutgers University to supplement her literary income and in 1989 she became the Robert F. Goheen Professor of Humanities at Princeton University.

Morrison is best known for her exceptional ability to convey the experience of the African Diaspora while simultaneously infusing it into the mainstream of the American literary tradition. "Our silence has been long and deep," she wrote, "In canonical literature we have always been spoken for. Or we have been spoken to. Or we have appeared as jokes or as flat figures suggesting sensuality. Today we are taking back the narrative, telling our story. The narrative line is the way we discover the world." One of her colleagues wrote, "If I were to describe her writing I would say that she has the insight of a shaman and the lyricism of a great poet."